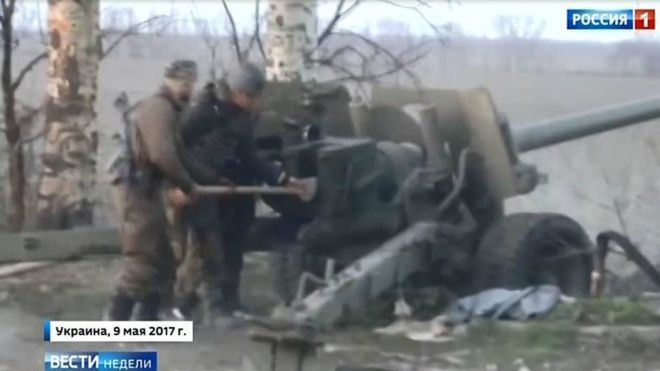 It’s nearly summer holiday time, and the news cycle is slowing down. But when Russians turn on their TVs at their summer houses, Ukraine and Syria still receive the lion’s share of news time. This Sunday (2 July), the flagship news programme of state channel Rossiya-1, Vesti Nedeli, was largely devoted to foreign policy.

The programme’s host Dmitry Kiselyov is the head of the state international media agency Rossiya Segodnya and often described as Russia’s “chief spin doctor” (and on the EU sanctions list). He dedicated no less than ten minutes of prime-time TV to Syria.

Russians have been tiring of reports from Ukraine for some time, but that doesn’t seem to have had a significant effect on the contents of state television, where Ukraine remains high on the agenda. According to a poll by independent pollster Levada, the interest of Russians in Ukraine’s events has declined since 2015.

In May 2017, 35 % of poll respondents said they follow “events in Ukraine” actively, 22 % did not follow and 43 % kept track “without paying specific attention”. In May 2015, 50 % of the respondents answered that they follow actively what is happening in Ukraine, 13 % didn’t pay attention to Ukraine and 37 % stated they follow but without much attention.

Syria, on the other hand, is the country that Russians now see as their fourth best friend in the world, according to another Levada poll. It has gained its new status after Russia started its military operation in Syria in 2015.