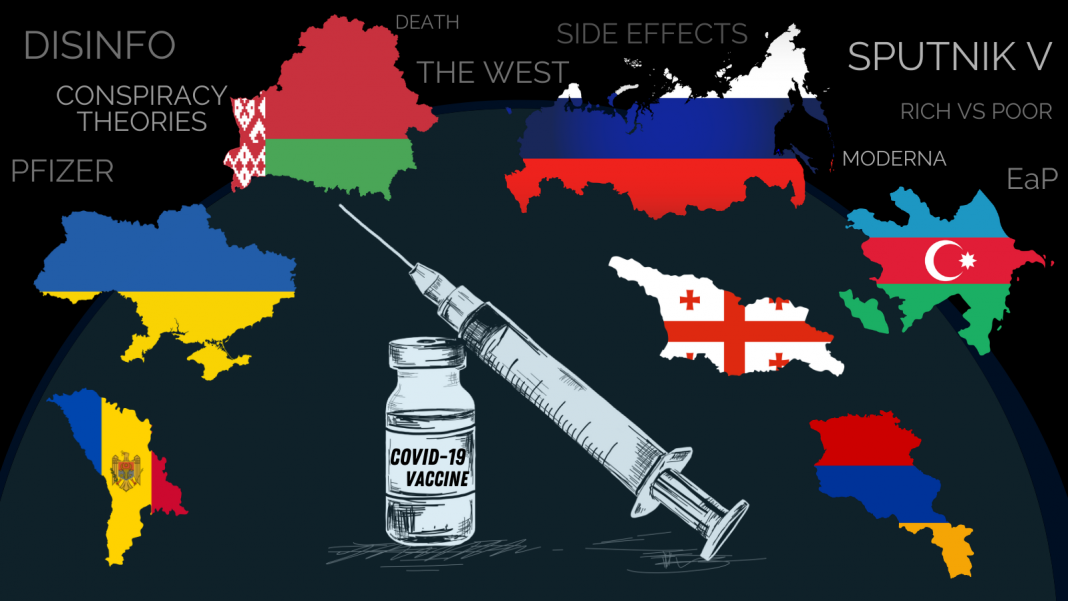 Seen from Kremlin the Covid-19 vaccine Sputnik V has developed into an ideological offensive with a ferocity a bit like a ‘Cold War’ on words.

The trends in what has been dubbed ‘vaccine diplomacy’ campaign in our recent Special Report are aggravating. Kremlin is busy leveraging diplomatic channels, state-controlled media and networks of supportive and alternative media outlets to support its narrative of Sputnik V vaccine supremacy.

Since New Year, the tone and media landscape have hardened considerably. Promotion of the Sputnik V vaccine is not enough. A simultaneous massive, vulgar and misleading demotion of other vaccines, especially Western like Pfizer/BioNTech, Moderna and AstraZeneca now roll like wall-to-wall banner streams. The campaign against Pfizer/BioNTech is fuelled by half-truths and insinuations.

At the same time, any critique pointing to the lack of trial results and transparency in deploying Sputnik V is dismissed as Russophobic reaction and portrayed as a Western waged “vaccine war”. This only makes sense if the overall attitude to the vaccines roll-out is that of racing cars competition, instead of a cautious and verified certification.

Noteworthy is also the silence on China’s vaccines. In comparison with other policy areas, where Russia openly promotes her relations with China, it seems like Chinese vaccine brands like Sinovac or Sinopharm are kept out of the picture.

It is not just about pharmaceutical products

For the pro-Kremlin media the early 2021 has already brought what it lacked last year: a full-blown offensive with a ferocity smelling a bit like a Cold War and ideological competition. And with that the trench-digging, narrow- or blind-eye approach to one own situation which often accompany it.

It is a one-sided offensive. Noteworthy is that this rhetoric is drummed up in the pro-Kremlin outlets and broadcast globally while a ‘mirror’-rhetoric is not -returned from governments in countries of the big Covid-vaccine producer companies (US, Germany, UK, etc.)

The ‘battleground’ has heated up especially in countries of the Eastern Partnership: Ukraine, Georgia, Moldova and Armenia offer easily accessible media markets. To a lesser extent in Azerbaijan and Belarus, where tougher media control by local governments set limits.

The key players are Russian state owned media, such as TV channel Rossiya 1, Rossiya-24, state news agency RIA Novosti and the multimedia platform Sputnik; the main vehicle to reach out to foreign language groups; broadcasting in 20+ languages. Social media platforms are also engaged with vigour like when RIA Novosti introduced the tag “Pfizer, Inc.” to promote the dangers of the Pfizer/BioNTech vaccine. The negative stories increased in number and intensity along the lines documented in November Pfizer/BioNTech, Moderna and AstraZeneca vaccines.

Put on short form the Pro-Kremlin narratives are:

-“The Sputnik V vaccine is the first, it’s fully effective and with no side effects. “

-“Sputnik V is a global success. Many countries around the world are buying or interested in Sputnik V, including the US and EU member states.”

– “The situation in Europe is damaged by lockdowns, hampered by EU bureaucracy and slow national vaccination programmes.”

Don’t be a traitor!

In Russia the discussion on side effects of the Sputnik V vaccine or the speed in roll-out of the Russian national vaccination program was present on mainstream media last year. However, any criticism of the roll-out was limited to smaller opposition platforms like Novaya Gazeta or appearing in media outside Russia, like in Riga-based Meduza.

Since New Year, the discussion is becoming a kind of ideological markers. For-or-against the system and the authorities. Not to the extent that is a for-or-against Putin, since his approval ratings and that of Sputnik V / vaccine scepticism do not correlate. There is considerable scepticism among the Russian public towards vaccinations, with opinion polls suggesting up to 60% of people don’t want to get vaccinated.

Meanwhile, a look across the Eastern Partnership countries…

Across the Eastern Partnership countries, pro-Kremlin disinformation outlets tend to duplicate same narratives as in the main Russian media, but with some country-by-country variations. The two most prominent narratives promote the safety and efficiency of the Sputnik V vaccine, while denigrating the safety and efficiency of Western vaccines, in particular the Pfizer/BioNTech.

Pro-Kremlin media focus on three main themes: – the efficiency and safety of the Sputnik V; – the alleged danger of Western-made vaccines, particularly Pfizer/ BioNTech and – the ‘genocide’ which the Ukrainian government is committing against its own population by refusing to use the Sputnik V vaccine offered by Russia (NewsOne, 29 Dec).

Further, the claim is reinforced by conspiracy theory that the United States is forcing Kyiv to vaccinate Ukrainians with American vaccine and forbids the purchase of Russian vaccines (Strana.ua, 17 Oct, 112, 27 Dec)

The spin has been put on local testing where the American vaccine in Ukraine will be tested on army men serving in Donbass and the elderly creating the image of them as doomed guinea-pigs: Western vaccine is dangerous, people die.

Like elsewhere, most pro-Kremlin media about vaccines in Georgia replicate the alleged dangers of Western-made vaccines, in particular the Pfizer/BioNTech, while playing up the safety and efficacy of the Russian-made Sputnik V vaccine. More conspiratorial narratives claim the Pfizer vaccine alters human DNA. Local actors are spreading such narratives. The EU is presented as using disinformation to maliciously attack the Sputnik V vaccine.

Most pro-Kremlin disinformation focusses on promoting the safety and efficacy of the Sputnik V vaccine while disparaging the safety of Western vaccines, in articles particular against the Pfizer/BioNTech vaccine. Other disinformation spreads anti-vaccine conspiracy theories. When the EU is mentioned, disinformation actors present it as preparing ‘registers’ (vaccination passports) of those who refuse vaccine while citizens are sceptical. A few articles have accused the EU of launching an ‘information war’ against the Sputnik V vaccine in order to defend Western pharmaceutical companies.

Conspiracy theories and anti-vaccine sentiment tend to be minimal mainly because of strict government censorship.

The Covid-19 pandemic shows absolutely helpless and divided EU, while Russian vaccine is much better than EU’s analogues. Instead of effectively coping the pandemic, the EU turned into a totalitarian empire (3 December 2020, Imhoclub.by) (30 November 2020, Baltnews).

Anti-EU narratives tend to focus on the success of China and Russia in vaccinating their populations and the relative incompetence of the EU countries in doing so.

The Azerbaijani government exercises tight control over the media environment and anti-vaccine conspiracy theories are not prominent. Disinformation tends to come from the local version of the Russian Sputnik channel – Sputnik.az  – and other more marginal sources. Narratives tend to mirror those in other outlets: promoting the Sputnik V vaccine and denigrating Western vaccines.

The Azerbaijan government has announced it will use the Chinese CoronaVac vaccine from Sinovac company, importing four million doses of which a small amount has been delivered to Azerbaijan (Apa.az, 16 January).

So, for the time being that places Baku outside the immediate zone of Moscow’s offensive for Sputnik V.