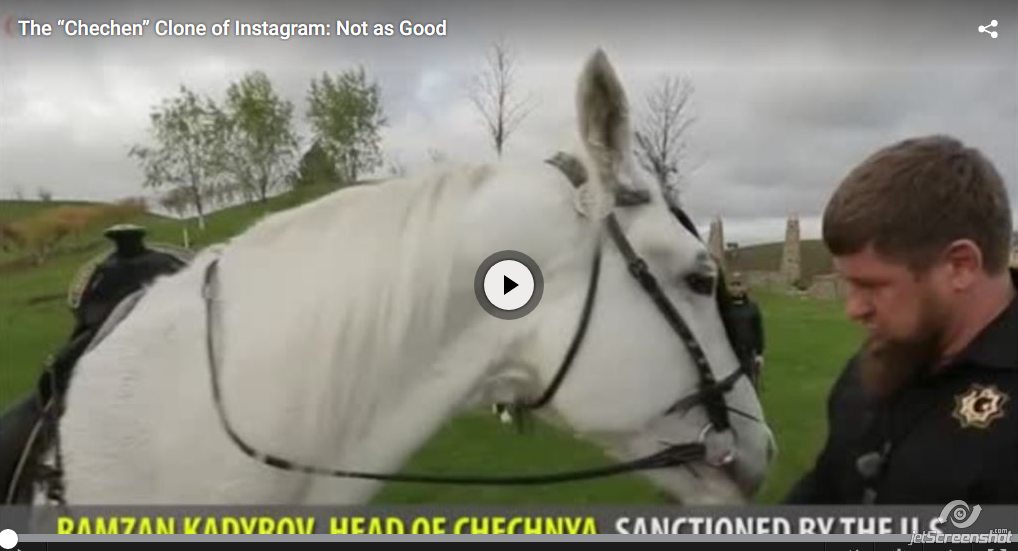 “There is a new social network being tested in Chechnya @ Mylistory, which is as good as the foreign ones”

Mylistory is an underdeveloped clone of the “old” Instagram, with mysterious origins.

On December 23, 2017, the head of Chechen Republic, Ramzan Kadyrov announced via his Telegram channel that his Facebook and Instagram accounts had disappeared.

Kadyrov, regularly rated among Russia’s most popular bloggers, said that he had been thinking of deleting his accounts, but did not do so for the sake of his “more than four million followers,” although his Kadyrov_95 Instagram account actually had 3.2 million followers.

Responding to the decision of the Western social media platforms to close his accounts, Kadyrov said he was happy with the actions of “Instagram and their bosses in the White House.” He also announced that he is switching to the “Chechen” network called Mylistory, which is “as good as foreign ones,” and to which “State Department employees can access only with the permission of the Russian Foreign Ministry and the government of Chechen Republic.”

Facebook explained that Kadyrov’s accounts were deleted in accordance with the company’s legal obligations after the U.S. sanctioned him for human rights violations.

The Chechen government’s Grozny TV channel dedicated dozens of reports to Mylistory, praising the app as #18 in the App store top charts.

Russia’s Ministry of North Caucasus Affairs called on all federal agencies to create accounts with Mylistory, indicating that Russia might see the app as having a larger role than simply a Chechen social network and will seek to boost it to the same popularity as vKontakte – Russia’s Facebook analog.

“Russia might be testing social media strategy similar to China’s: Rather than dealing with Western platforms, they’ve simply created an alternate universe where there’s a Chinese clone for every platform,” a social media expert told Polygraph.info

Several Russian and U.S. tech media specialist have tested Mylistory and given the app less-than-stellar ratings.

Russian T-Journal said the app is “a total copy of the old Instagram.”

The Russian newspaper Vzglyad wrote a flattering review for Mylistory, saying it is “booming in App store well ahead of Periscope, Tumbler and other popular applications. Its popularity is “not propaganda,” Vzglyad wrote, adding that many users have expressed gratitude to the app’s developers to Kadyrov for supporting it.

Polygraph.info tested the Mylistory application, from the process of downloading it from the App store to creating an account and digging into the developer’s IP address.

Mylistory is definitely not #18 in App store’s top charts of free social networking apps. It is not even close to being in the top 50.

The developer of Mylistory, according to its page in App store, is a Chechen man named Magomed Eskhanov. In the Russia’s online database of registered businesses, he is listed asCEO of the Advertising firm “Myli,” at this address: 3/25 A. Kadyrov Ave, Grozny, Chechen Republic.

According to the database, Eskhanov’s agency is 100% funded by the LLC “Grozny-Citi” a company owned by one of Chechnya’s most notorious businessmen — Movsadi Alviev, a co-founder of the “Akhmad Kadyrov Foundation,” named after Ramzan’s late father (who was the republic’s ruler from October 2003 until his assassination in May 2004) and ranked as #5 on Transparency International’s list of “9 grand corruption cases.”

Reportedly, the “Akhmad Kadyrov Foundation” is Ramzan’s personal tool for appropriating and laundering of billions of rubles.

But the most interesting part of Mylistory’s “developer Magomed Eskhanov” story is the IP address of mylistory.com: a search of the database of RIPE, the Amsterdam-based Regional Internet Registry (RIR) for Europe, the Middle East, and parts of Central Asia, leads not to Chechnya, but to a whole network of “dead ends” – hidden IPs “located” at different addresses in Moscow, including a 24-hour auto parts store and several P.O. Boxes.

Here are just a few examples.

Polygraph.info traced the “under construction” website listed in App store for Mylistory to one Alexey Galaev, who might be a real person and a freelance developer.

To be continued in Part II, which will reveal who Mylistory wants new users to follow.