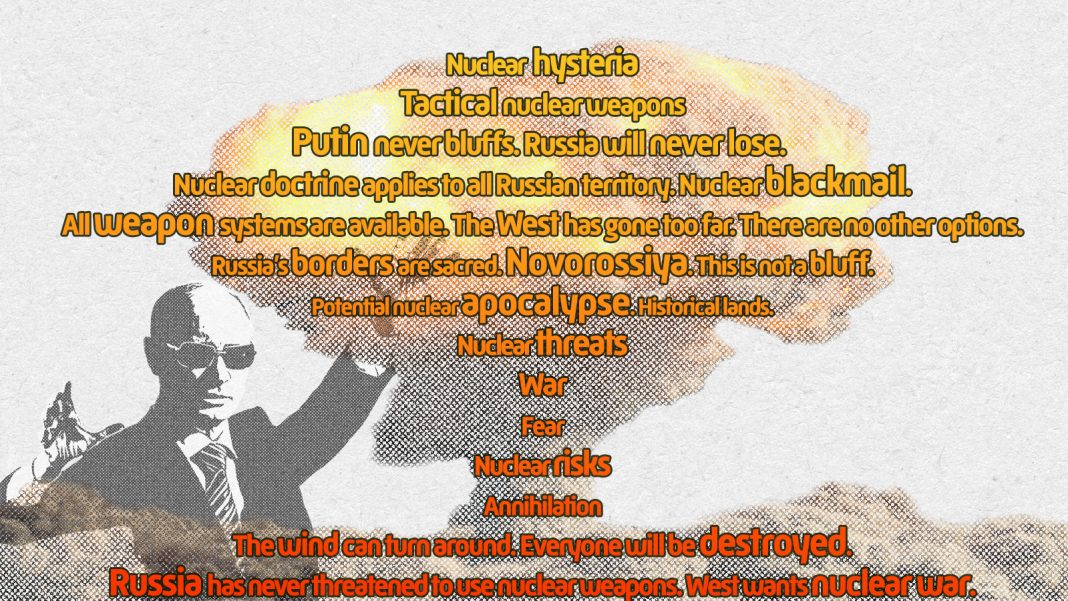 The past ten days have been very busy for Russian disinformation outlets and their amplifiers throughout the pro-Kremlin disinformation ecosystem. On 19 September, the puppet officials of the Russian-occupied territories in the Luhansk, Kherson, and Donetsk regions of Ukraine announced their intention to hold illegitimate referendums as a precursor to Russian annexation. Two days later, on 21 September, Putin delivered the news that many had suspected was coming for some time – mobilisation in Russia to counter successful Ukrainian counteroffensives. Putin’s speech was laden with the usual Kremlin scaremongering, but one element stood out – the thinly veiled nuclear threat, punctuated with a rasp ‘This is not a bluff.’

First, the Kremlin’s mouthpieces took the most obvious interpretation of Putin’s ominous phrase ‘[Russia] will certainly make use of all weapon systems available to us’ and overtly threatened Ukraine and the West with nuclear annihilation. This was amply supplemented by ridiculing the West for falling into a panic at the mere sight of Russia’s nuclear might. Then the nuclear disinformation narrative started to shift.

Perhaps not sensing political acceptance for their more belligerent nuclear stance, pro-Kremlin outlets started to repeat the well-known disinformation claim that Russia has never threatened anyone with nuclear weapons. The dualism between portraying Russian might and claiming victimhood is a well-known Kremlin tactic. So the tamer nuclear narratives of Russia being the victim of Western nuclear blackmail were still well interspersed with threatening insinuations of using tactical nuclear weapons to protect Russian territories.

Having whipped up a sufficient frenzy about potentially impending nuclear risks, pro-Kremlin outlets engaged in another favourite pastime – deflecting the blame. Referring to the preceding statement of US President Biden and the reaction of US National Security Adviser Jake Sullivan to Putin’s nuclear rhetoric, pro-Kremlin disinformation pundits went on to falsely claim that the West is to blame of any potential nuclear escalation. This disinformation narrative is in line with previously established false claims that the West wants to instigate a world war. This was then supported by an outflow of accusations that the West is driving nuclear hysteria to vilify Russia and its noble intentions in Ukraine.

Of course, some pro-Kremlin pundits, like the notorious Russian propagandist Margarita Simonyan, have been at ease with advocating a nuclear holocaust against Ukraine for some time now. The central figure of government propaganda, Dmitri Kiselyov, became notorious internationally when, following the illegal annexation of Crimea, he claimed that Russia was capable of turning the US into ‘radioactive ash’. However, the current revamp of the nuclear rhetoric in pro-Kremlin disinformation is still quite telling of the Kremlin’s influence tactics.

First, issue a veiled threat and let your propagandists turn it into an overt nuclear threat. Then pretend to have nothing to lose to signal the readiness to use the weapons in order to deter potential countermeasures. Finally, blame the West for the escalation and remain ambiguous enough to shift the blame as necessary.

Nuclear threat without the nukes

The spectre of nuclear threats has been simmering on the back-burner since the day Russia invaded Ukraine on 24 February 2022 without any cause or provocation from Ukraine’s side. But it has not always been as overt and directly tied to the Russian nuclear weapons arsenal as the pro-Kremlin disinformation pundits would like us to believe since Putin’s ‘mobilisation’ speech on 21 September.

Throughout the war, the pro-Kremlin disinformation ecosystem also propagated less overt but equally devious nuclear threats. The constant accusations of Ukraine shelling the Zaporizhzhia nuclear power plant and the following expression of concern about a potential nuclear disaster or increasing nuclear risks were other tactics to disseminate fear and unease about nuclear security.

In fact, the Zaporizhzhia nuclear power plant has featured prominently in pro-Kremlin disinformation for at least a few months now. Besides accusing Ukraine of all possible wrong-doings, the tone is always hostile. Like pondering loudly about the dominant wind patterns blowing westward from the plant.

It is not a coincidence that the dispersal of ambiguous yet clearly threatening nuclear rhetoric comes on the heels of announcing the sham ‘referendums’. Some propagandists drew a telling connection between the referendums and the nuclear rhetoric, stating openly that Russian nuclear doctrine will apply to the occupied territories in Ukraine, thus extending the Russian nuclear shield to deter Ukraine and the West from attacking them.

However, the propagandists’ public musings about nuclear security should be considered calmly and with a level head. Part of their intent is to whip up a frenzy and create the impression that the Kremlin and its master are unpredictable and if pushed into a corner, they will be forced to deliver the ultimate strike.

This image of a cornered and threatened animal works to the Kremlin’s advantage.

Combined with the constant reminders that this animal is a nuclear one, pro-Kremlin disinformation seeks to deter and dissuade the West from responding to Russia’s annexation of occupied territories in Ukraine.