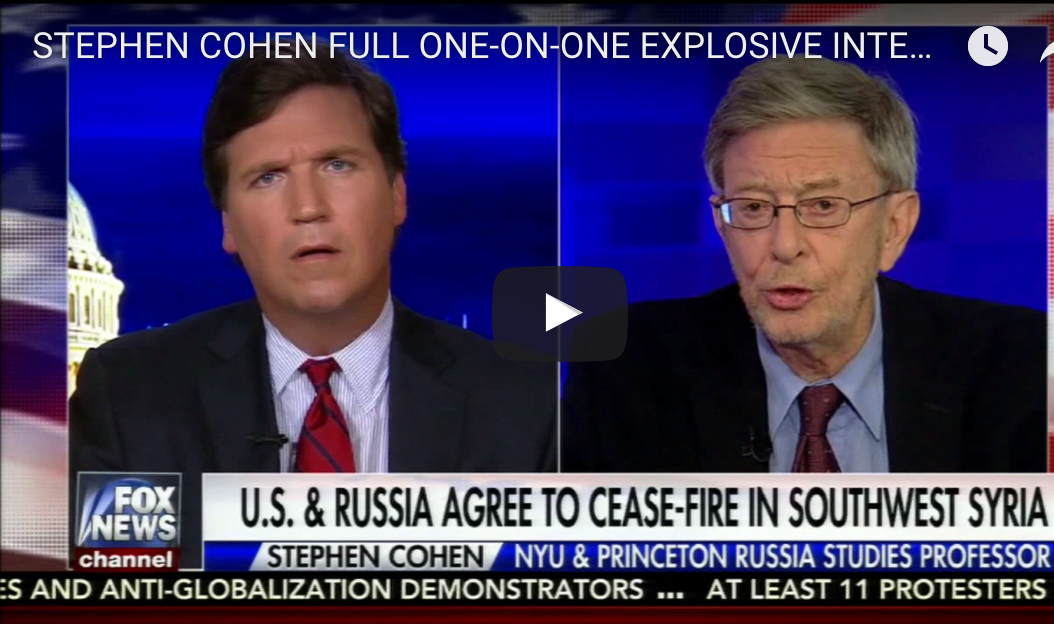 Russia’s foreign language propaganda outlets have long had a problem getting real experts to go to bat for the Kremlin. Most times they rely on some blogger or “independent journalist” and  call them “political analysts.” As such, Stephen Cohen, a Putin apologist with an actual academic pedigree, is often lauded by pro-Russian media as a “real” expert on Russia. What they forget is that a PhD is not a license to ignore facts and evidence. History is determined by consensus. There’s always room to challenge that consensus, but you’d better have evidence to defend your claim. When it comes to Cohen, his problem isn’t just with recent history, but with the present as well, and his increasingly desperate attempts to defend Putin are fast becoming entertainment. In a recent interview with Slate, Cohen does his well-worn pro-Putin song and dance. He insists that there’s no evidence of Russian interference in the 2016 U.S. presidential election and all of Putin’s aggressive moves in the world are the West’s fault. They forced him to invade Ukraine and annex Crimea, but it’s not really an invasion because… reasons. Cohen’s claims regarding Ukraine in particular are just plain wrong. He dismisses the interviewer’s counter-arguments and all but tells him that he’s not the best source on what’s going on in Ukraine. One might assume that Cohen would decline to comment in detail on Ukraine, given that he admits his lack of knowledge in that area, but one would be wrong. Things go awry as soon as the interviewer begins asking for specifics about Russian involvement in Ukraine.

Q: You just said that Ukraine is a civil war. What was the Russian annexation of Crimea?

Cohen: There’s a long history, but it is a civil war in the sense that Ukraine is a country.

Let’s award Cohen a gold star sticker here; he admitted Ukraine is a country. That’s real progress. But apart from that, this answer makes no sense. Saying “there’s a long history” is a typical weasel tactic used by people who want to obfuscate and avoid discussing the present. You could see it in discussions about the Balkans in the 1990’s and you see it all the time in discourse about the Middle East. Any conflict or international dispute can have a long history, depending on how thorough you want to be. One need not study all of world history to understand basic causes and events. In the case of Crimea’s annexation, there are two important things to understand:

Next Cohen unleashes a speech about Ukraine so riddled with nonsense that it’s going to take a while to unpack.

“And a nation, but a country that has long been deeply divided by history or by God. I mean, we’re talking ethnicity, language, religion, political tilting. One part tilts toward Russia, one part tilts toward the West. Many millions of Ukrainians and Russians have intermarried over the years. This is a country that always had the potential to either break apart or launch into civil war. The events of 2014, for which both sides are highly culpable, initiated a civil war. This entourage around Putin, one segment of it was absolutely 1,000 percent convinced that NATO was headed via Kiev to Crimea. Had Crimea fallen in any way to NATO, any way, even in the shadow of NATO, Putin would have had to either go to war or resign. No Russian leader would have been able to sustain that kind of defeat.”

I don’t know about God, but I do know plenty of other nations that were divided by history. Italy, Germany, the United Kingdom (the term “United” is a big hint), the United States, and a certain country called the Russian Federation, to name a few.

The claim that Ukraine always had the potential to break apart into civil war is absolute nonsense, proven by the fact that it took an actual Russian invasion to start this “civil war.” Ask anyone who lived in the Donbas region prior to 2014 and they will tell you that the idea of a war breaking out there was ludicrous. In fact, ever since the 2004 Orange Revolution, Russia has cultivated political projects in the region designed to foment pro-Russian sentiment. One of those projects was a political party with a familiar sounding name – the Donetsk Republic. Strangely, the party lacked any significant political success and its rallies typically attracted 30-50 people at most, a strange showing for a region that was supposedly bristling with separatist sentiment.

Ukraine, like most countries, is diverse. In fact, Russia is much more diverse than Ukraine in almost every way, yet Cohen doesn’t see any civil wars on the horizon there. There certainly are linguistic, cultural, and political differences among Ukrainians, but there is nothing comparable to what existed in say, Bosnia and Herzegovina during the death of Yugoslavia. Moreover, there never was a defined “Donbas” identity, as this handy facts and figures guide for journalists points out. In fact, the very definition of the Donbas has changed over time. There certainly are folks in Ukraine who spread hatred of “the other,” be they Western Ukrainians or those in “the East,” but much of this talk is similar to Americans talking about secession when their candidate for president loses. The idea of a “divided Ukraine” is largely a myth, and one that has been generously supported by Moscow.

The simple fact is that contrary to Cohen’s claim, this isn’t a civil war and no, both sides are not “highly culpable.” From the moment buildings were seized in the east, the Ukrainian government offered amnesty to the militants in return for laying down their arms and leaving the government offices they occupying. After the initial outbreak of hostilities, it was the Ukrainian side that first offered a unilateral ceasefire. These offers, including the current Minsk II agreement, were continually and consistently violated by the “rebel” side. It’s almost as if they somehow know they’ll never run out of ammunition, equipment, fuel, and all the other supplies making up the logistical burden of fighting the sort of positional mechanized warfare they’ve used since 2014.

At the end of that awful quote, Cohen claims that Putin was forced to act because people in his “entourage” were sure that Crimea would fall to NATO. Putin himself seems to take credit for the decision, but let’s ignore that for a moment. Let’s also ignore the fact that since 2008 NATO has refused to offer Ukraine a membership action plan. Let’s even ignore the fact that the majority of Ukrainians were either against or neutral on NATO membership even well into the war. We can ignore all of those things because regardless of what Putin or people in his entourage believed, he had no right to invade and annex part of another country. The world is not a board game where you get to take territories at will to block an opponent’s move.

Lastly Cohen cites a post-annexation poll claiming that 80 percent supported “reunification” with Russia. He completely ignores the fact that this referendum was carried out with the help of the Russian military, opposition voices were largely silenced, and there was very little time to debate the issue. Saying 80 percent supported annexation implies that 20 percent must have wanted to remain in Ukraine. There’s just one problem – this was not an option on the referendum ballot. The referendum had no status quo option, i.e. remain in Ukraine. Instead it offered reverting to an earlier constitution that would have given Crimea de facto independence, which compared to remaining in Ukraine or joining Russia, would have seemed like the worst of both worlds.

Cohen continues to embarrass himself over this issue.

“If a province in any country votes for independence … certainly the Crimeans did. There’s just no question that that was a legitimate referendum. People get a little confused about what the choice was.”

Yes, some people do get a little confused about what the choice was; people like Stephen Cohen, apparently.

There are a lot of questions about the legitimacy of a referendum held at the barrel of a gun and orchestrated by Russian special-forces who first seized official buildings so they could control the annexation process.

Way back in 1992, the Russian federal subject of Tatarstan held a little referendum of its own. It did so without intimidation, self-defense militias, or Turkish troops without insignia taking over government buildings in the capital of Kazan. The referendum had a yes or no question on Tatarstan’s sovereignty, and passed with 62% of the vote. Russia declared the referendum to be in violation of the constitution, which incidentally is true of the Crimean referendum as well. Even today the Russian government continues working hard to dismantle Tatarstan’s institutions of autonomy, such as the title of President of the Republic. Chechnya also attempted to express its right to self-determination around the same time as Tatarstan, and Russia’s reaction was two devastating wars that ravaged the Caucasian republic and cost some 160,000 lives.

As if that wasn’t enough, Cohen tries his hand at a little stand-up comedy. The interviewer reminds him that the referendum took place after the Russian military had entered Crimea, and Cohen responds with:

“No, no, no. Well … wait, wait, wait, wait. Russia was already there by treaty. There were approximately 23,000 Russian soldiers at the naval base in Crimea, at Sevastopol. It was an invasion only in the sense that they left the base on Crimea.”

Yes, Russia was “there,” in naval bases they occupied through a treaty. The treaty did not allow them to seize Ukrainian military bases, political infrastructure and hold a “referendum” on separation. So yeah, Stephen, it was an invasion. There used to be Imperial Japanese soldiers occupying bases in their concessions in China. When they left those territories and started a war with the Chinese government- it was an invasion.

And this is what is so tiring about Cohen’s whataboutism. He’s certainly correct to say that powerful nations, the United States most of all, ignore international law when it suits them. However, we must ask what the best alternative is. Should the people of the world just throw up their hands and remain silent while the US, Russia, China, Iran, and Saudi Arabia divide up territory into spheres of influence? Or should we push for a world in which people strive to hold their governments accountable to international law?

One almost feels sorry for Cohen, because you can feel the cognitive dissonance. As an academic, he knows he can’t dive into the deep end of conspiracy theories and pseudo-intellectual political thought that is so common among Putin’s other useful idiots in the West. But there simply is no way to rationally defend the irrational. You cannot be a realist while arguing against material reality.