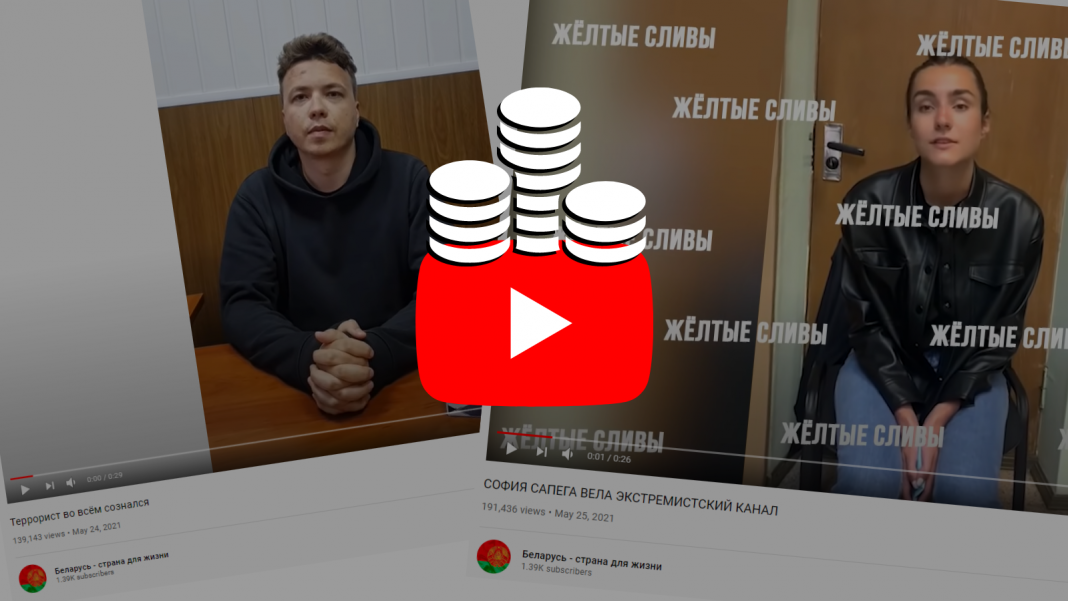 To convey a positive image of Belarus and promote a pro-government Telegram channel, the ‘Belarus – the country for life’ YouTube channel uses forced confessions of political prisoners as paid advertisements.

It all started with an alarming tweet. Tadeusz Giczan, the editor-in-Chief of Belarus’s largest Telegram channel NEXTA_TV, wrote that confession videos of people captured by the Belarusian state are used as paid ads on YouTube to advertise pro-government Telegram channels.

The man on the video screenshot is Raman Pratasevich after being arrested on 23 May 2021, following the forced diversion of a RyanAir flight from Athens to Vilnius to Minsk airport.

Pratasevich has worked as a photographer and journalist and currently is the editor-in-chief of the opposition Telegram channels “Nexta” and “Nexta Live“. After the rigged presidential election in 2020, these channels collected and published videos of mass protests, making the content accessible across the whole world. Now Pratasevich’s forced confession, titled ‘The terrorist confessed everything’, seems to be used to advertise pro-government Telegram channel Yellow plums (@zheltyeslivy).

It’s also important to bear in mind that this is not the first time such forced confession videos have been released.

The channel spreading the videos is called Беларусь – страна для жизни or ‘Belarus – the country for life’. It is worth noting that the official promotional video of Belarus (also visible on YouTube) from 2015 bears the same name.

The channel’s ‘About’ section does not reveal who is behind it. The only publicly available information shows that it has 1390 subscribers, and the view count exceeds a whopping 6 million.

Last, but not least, the channel was created on 5 August 2020. On the very same day, a video was uploaded, showing illegitimate president Alyaksandr Lukashenka delivering a speech. After the presidential elections on 9 August, the videos showed violent protesters with a question: “Is this peaceful?”. Another clip bashed the opposition.

To see how many people noticed this promoted campaign, we ran a Google search using the Channel ID code. We found that the videos uploaded by the channel and then promoted as advertisements, were shared in multiple Telegram channels. We also found a post describing how previously users saw advertisements of shampoo and English courses, but afterwards were targeted with pro-government video clips. The user also wondered why YouTube’s moderators allowed such ads to run.

We also found a Telegram message with a screenshot of the forced confession video of Raman Pratasevich’s partner, Sofia Sapega used as an advert. The video is covered with a Russian language watermark saying Yellow Plums, the advertisement has a hyperlink to the Yellow Plums Telegram channel and the very same channel had also published the same confession video.

The comments below the screenshot discuss how propagandists use the state budget for such advertisements and draw some historic parallels.

The cost and videos

As there is no publicly available information on who the ads targeted, we tried to find out how much it would cost the channel to run such ads if they only focused on an audience in Belarus. Thus, we mimicked the process of creating a YouTube advertisement to obtain the suggested cost per view (CPV). We found that a view in Belarus costs 0.01 euro.

As for what counts as a view, Google Ads defines it as a user interacting with the ad, watching it entirely or for at least 30 seconds. It’s important to bear in mind that YouTube does not publicly share information about how many of the views were a result of paid promotion.

According to the information above and the publicly visible 139,000 views on the Raman Pratasevich’s video, the promotion cost should be at least 1390 euros. But that’s only the minimum sum. As stated above, YouTube only counts a view if a user watches the video for at least 30 seconds but charges the channel owner 0.01 euros every time a user saw at least 4 seconds of the clip.

As for the entire channel, by June 2, it had 55 videos. The most popular video features rapper Seryoga who claims there is absolute peace and order in Belarus and that the infrastructure is working. The clip has 672,000 views, 4 shares and 12 likes on Facebook and according to media analysis tool BuzzSumo it is an advertisement.

The channel also has multiple videos about Belarusian opposition leader Sviatlana Tsikhanouskaya. One of them is a 12 second compilation of different clips that make her say “Spring is close and we know that those guilty for violence against Belarusians… Me, Svetlana Tikhanovskaya, my team, my representatives will go to jail and it’s not an exaggeration.” The description of the video is simple: “Это конец Света” or “This is the end, Sveta”. The video has 196,000 views.

On the other side of the spectrum, we can find a two minute video showing illegitimate Belarusian president Alyaksandr Lukashenka giving a speech, protesters harassing the police and some smiling babies. The video description says it’s powerful, bright in emotions and constructive and it has 171,000 views.

When the same approach is applied to the YouTube channel of the Belarusian Information Agency BelTA, the result is, on average, 7,909 views per video.

Moreover, a YouTube channel with only 1390 subscribers should normally receive fewer than 1000 views on non-promoted content (point proven by eight videos with less than 1000 views). The numbers above and below show that the content was either viral or there were more videos used as adverts. The latter would mean that someone is paying YouTube tens of thousands of euros to attack the critics of the Belarusian regime, advertise a pro-government Telegram channel, show that everything is in order in Belarus and that the president is a trustworthy person.

Out of the 55 videos uploaded by the channel, BuzzSumo was able to gather information about 14. While it labelled only two of them as advertisements, some of the others (namely the forced confession of Pratasevich) fell very close to the threshold BuzzSumo uses to detect an advert. Note that while Sofia Sapega’s video has 193,600 views, it has no shares, likes or comments on Facebook, Twitter, Reddit or Pinterest.

Returning to the Tweet of Tadeusz Giczan and the question of what kind of role the Belarusian Information Agency BelTA plays in using Raman Pratasevich’s video to promote pro-government Telegram channel Yellow Plums, we can only rely on netizens discussing the matter and sharing screenshots of ads with hyperlinks to the channel visible.

Thus, on the surface, the Yellow Plums Telegram channel is not linked to BelTA. However, the channel regularly posts exclusive material and personal data that only the special services have access to. It also posts a ton of inhumane, highly toxic content, not just propaganda per se.

YouTube has said that it has removed the forced confession ads. But the damage has already been done, the videos of Raman Pratasevich and his partner Sofia Sapega have already received 139,000 and 191,000 views respectively. While the ads have been stopped, the videos are still there, amongst others, some of which portray the opposition as criminals and the government as its victim. And by doing so, the owners of the channel seem able to avoid YouTube’s Community Guidelines that regulate what is not allowed on the platform.

For some, these videos might be a stark reminder of how their country treats independent media. For others, they are a reminder of an authoritarian regime using taxpayers money and the internet to lie and manipulate their citizens. And for some, these videos are just advertising worth 0.01 euros per view. Times five, maybe six million? And that’s just one channel.

* Update: on the evening of June 3, the channel uploaded yet another video of Raman Pratasevich, this time titled: ‘Pratasevich: I respect Lukashenka!’. In the video he confesses to organising mass unrest and regrets urging people to protest.