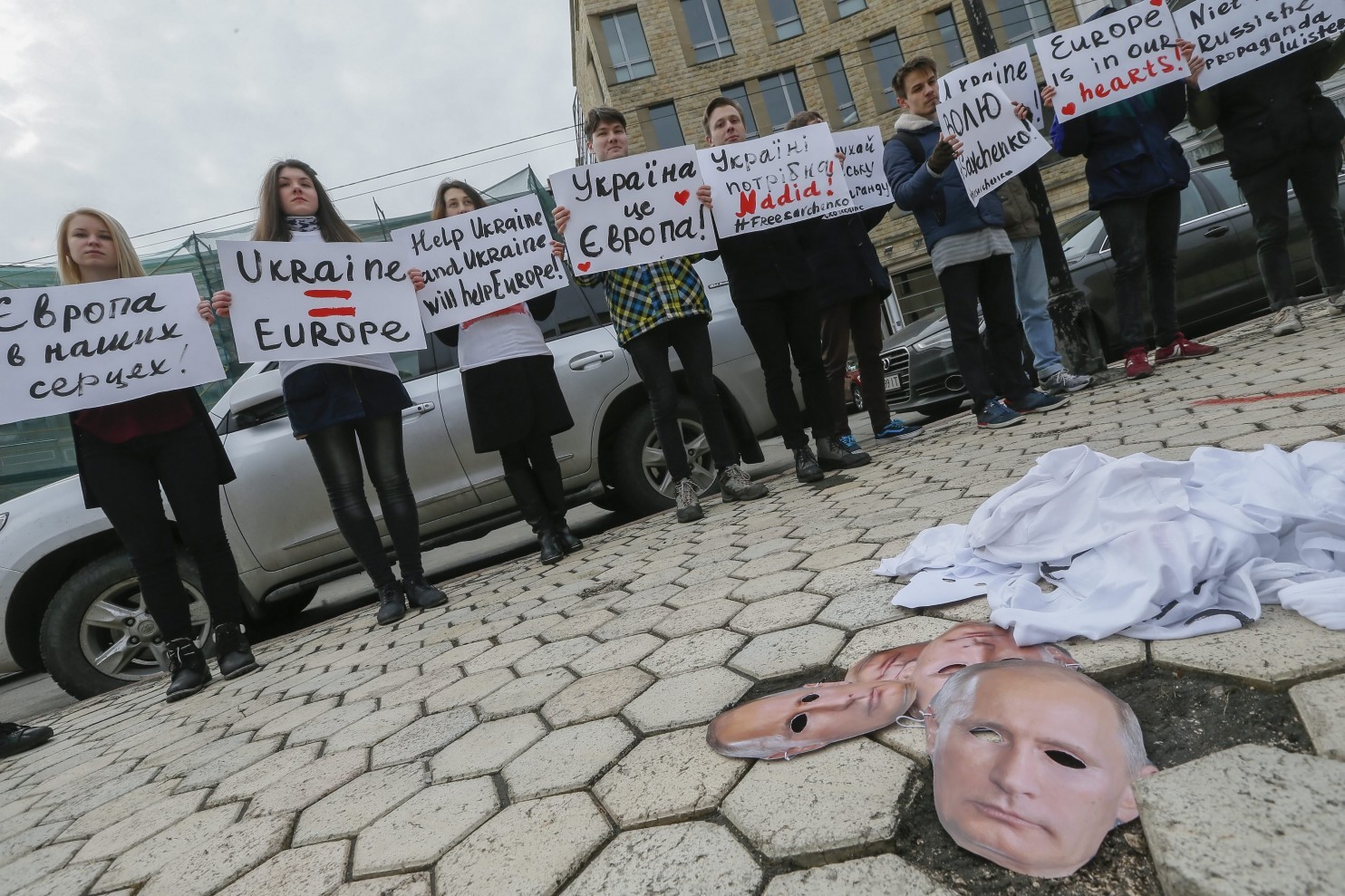 Ukrainian activists hold placards in front of masks depicting Russian President Vladimir Putin during a rally near the Dutch embassy in Kiev ahead of a Dutch referendum on a European Union trade agreement with Ukraine. The signs read “Don’t listen to Russian propaganda,” “Ukraine is Europe” and ‘”elp Ukraine and Ukraine will help Europe.” (Sergey Dolzhenko/EUROPEAN PRESSPHOTO AGENCY)

In a vague sort of way, many people are aware that the Russian government provides material and moral support to extremist political groups in Europe. Chancellor Angela Merkel has asked her security officials to look into Russian influence in German online media. Marine Le Pen, the leader of France’s far-right National Front, has taken loans from a Russian bank to fund her party, and is asking for more.

But until last week’s Dutch referendum, we hadn’t seen a good example of how Russian influence actually works in a Western European election. The referendum, the first to be held under a new law, was launched when a populist, hoax-loving website gathered more than 300,000 signatures on a petition. Its editors were searching for an issue — any issue — and they found one: On Wednesday, Dutch citizens were asked to express their feelings about a European trade agreement with Ukraine, the same treaty that Ukrainians fought for, and died for, in February 2014.

In retrospect it is extraordinary that this treaty, designed to facilitate trade and cooperation between Ukraine and Europe, has caused any controversy at all. It is a long, technical document, more than a thousand pages of jargon. It already went into effect, on Jan. 1. It is not unique or interesting: The European Union has many such treaties, with Chile, Jordan and others. Of those who bothered to vote, it’s probably safe to say that few read it. One of the referendum’s initiators told a Ukrainian journalist of my acquaintance that he certainly hadn’t read it and wasn’t going to — but “don’t take it personally.”

It’s true that the Dutch far-left and the Dutch far-right had other goals. They used the vote to undermine a center-right, economically liberal government, and to galvanize their anti-European followers. They succeeded: On Wednesday, 32 percent of the Dutch population turned out, just above the percentage needed to make the referendum legal, and two-thirds of them voted against the treaty.

How many of them were moved by Russian disinformation? It’s hard to say, though certainly there has been a lot of it in the Netherlands in recent years, and it accelerated in recent months. Much of it served to create extra uncertainty and fears about nonexistent Ukrainian threats. Many of the “no” campaign’s themes, headlines and even photographs were lifted directly from Russia Today and Sputnik, Russia’s state propaganda website. According to a poll cited by a Ukrainian foreign ministry official, 59 percent of those who voted against the treaty listed, as an important motivation, the fact that Ukraine is corrupt; 19 percent believed that Ukraine was responsible for the crash of MH-17, the plane that Russian separatists shot down over Ukraine in 2014; 34 percent believed that the treaty would guarantee Ukraine’s membership in the European Union. Of those three points, the second two are certainly false. The first, while true, is hardly a rational argument against a treaty designed to reduce corruption in Ukraine.

Other than that, the campaign was muddled. Far-left campaigners took Palestinian flags to “no” rallies. The far-right talked about Muslim immigrants. The Dutch government, obligated to subsidize electioneering groups, botched the job and distributed money, among other things, to a group that printed Ukrainian national symbols on toilet paper as well as to animal rights and nuclear activists. Ironically, or perhaps not, the Dutch far-right used corrupt methods to fight corrupt Ukraine, and obtained a good deal of money under false pretenses.

The Dutch government itself never joined the campaign. In Amsterdam a month before the vote, I met Dutch officials who seemed openly afraid of the far-right media. They didn’t want to be denounced, or mocked in the tabloids, or shouted at by thugs in the street. The government’s majority is small, I was told. Sure there are lies being told, they said, but we don’t want to take the risk of correcting them.

What happens next is unclear. The referendum was meant to be “consultative,” not binding. A treaty already approved by 27 countries can’t be renegotiated from scratch. No doubt some solution will be found, but whatever it turns out to be, it’s not as important as the lesson we’ve just learned: Small minorities of angry people, when well organized, can out shout the divided, fearful, apathetic centrist majority in Western Europe — and Russia is prepared to help them do it. This time the stakes weren’t so high, but next time, they might be: The far-right is now the largest political force in the Netherlands. We learned a parallel lesson in the 1930s, but it seems we need to be taught it once again.

Anne Applebaum writes a biweekly foreign affairs column for The Washington Post. She is also the Director of the Global Transitions Program at the Legatum Institute in London 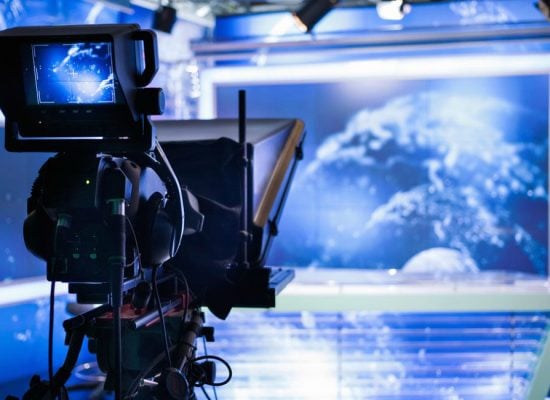 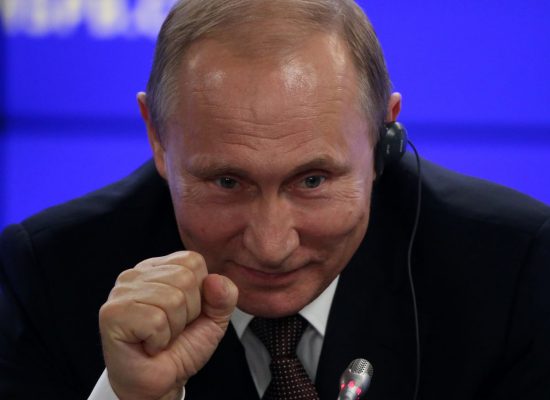 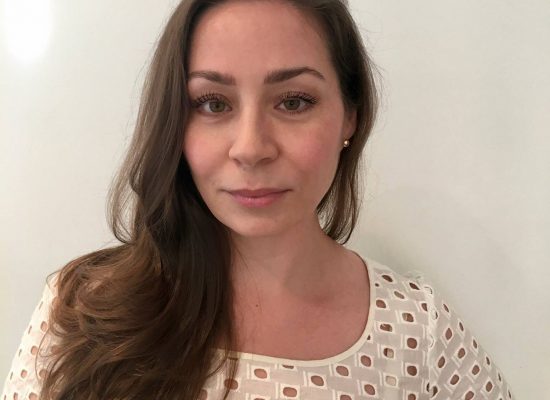 The justifiable outrage at Western reporting on Ukraine 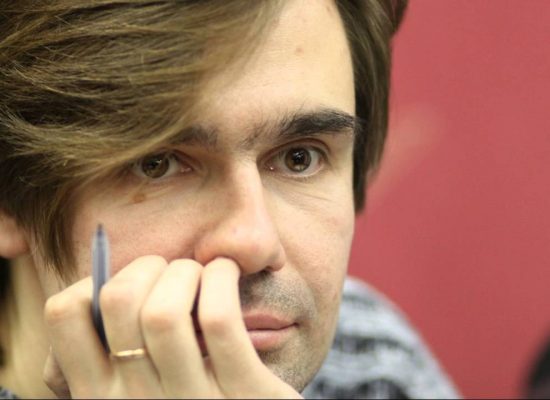 Kremlin-promoted mythologized Russian past opens the way to a return to stalinism, Orekh Says 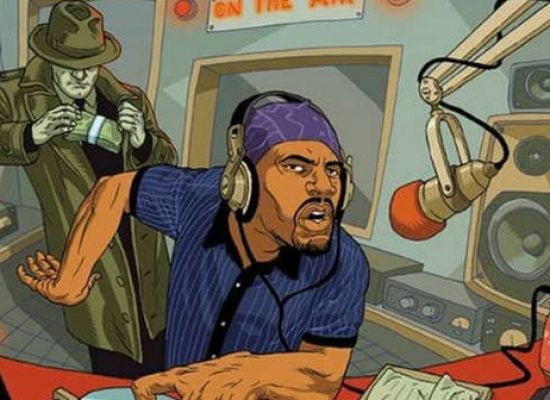 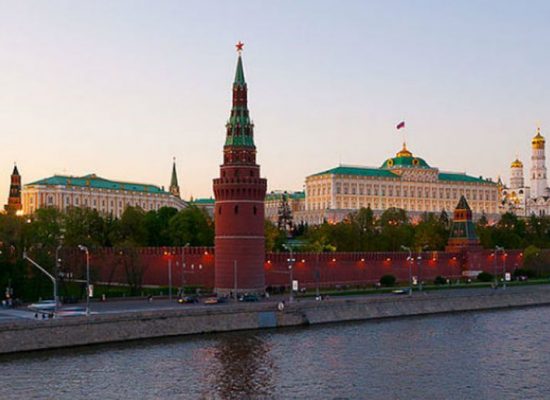 Movies and propaganda: How the Kremlin influences public opinion at home and abroad