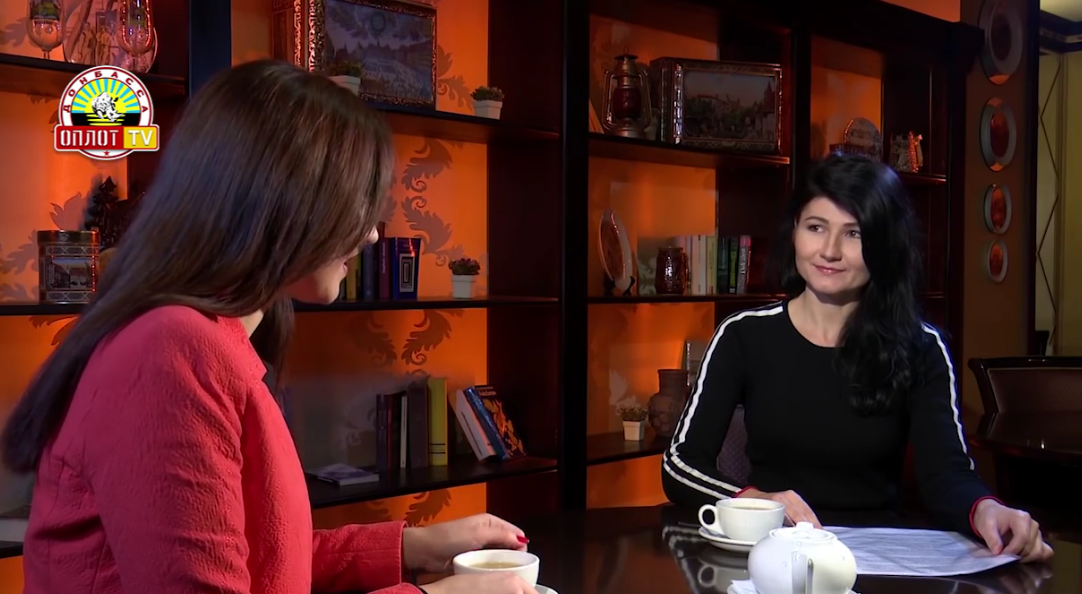 On October 24 occupied Donetsk propaganda television channel Oplot released a video interview with the so-called Czech consul of the Russian sponsored Donetsk People’s Republic (DPR) Nela Lisková. The 10 minute conversation is filled with primitive anti-western rhetoric and pro-Russian propaganda and is aimed at an audience that is not only closed to western ideas, but has absolutely no access to them. Presenting a small office in the provincial Czech city of Ostrava as a consulate and the official representation of the Donetsk People’s Republic in the Czech Republic is patently ridiculous because this office has no official stature and the DPR is an unrecognized entity. This position has been clearly articulated by the Czech MFA.

The DPR office in Ostrava opened in September of this year and its faux diplomatic status was debunked by Stopfake and dismissed by the Czech authorities.

Nela Lisková talks about the possibility of the DPR gaining international recognition and establishing official ties with the Czech Republic, something that is both impossible and absurd as the DPR is not a state and has no official recognition. According to the Czech Civil Code the so-called consulate registered by the regional court in Ostrava under the name Zastupitelské centrum DNR, z.s. is simply an association and therefore cannot be regarded as a diplomatic mission or a consular post.

Along with rather typical Russian disinformation claims, such as describing the conflict in Donbas as a civil war and claiming that those who protested against the opening of the Ostrava office were paid demonstrators, the 10-minute interview is loaded with a number of other completely unbelievable statements.

One of the most outrageous claims that Lisková makes is that the Czech government, without any regard to public opinion, forced the country to join the EU.  Lisková knowingly holds back the fact that on June 13-14, 2003 the Czech Republic held a referendum on joining the European Union. More than 77 % of citizens voted in favor of European integration.

Another distortion that Lisková expresses is the claim that if the Czech Republic left the EU, it would return to its pre-accession standard of living after several years and had Prague not fulfilled all the conditions laid down by the EU and the US, its standard of living today would be much higher.

Contrary to Lisková’s claims about the negative consequences of the Czech Republic being in the EU, Eurostat data clearly show that the Czech GDP per capita purchasing power parity has grown from 79 % in 2004 to the contemporary 85 %. Furthermore, the Human Development Index, issued annually by the UN, clearly illustrates that the quality of life in the Czech Republic has been consistently rising.

Throughout the interview Lisková claims that the EU and the Czech government are puppets of the United States. She claims the pro-western narrative of the mainstream media does not reflect the real mood in Czech society and that not only does 80% of the population support the politics of controversial Czech president Miloš  Zeman, they also support the gradual warming of relations with Russia.

Opinion surveys, however, show a very different picture. According to a poll conducted by the Public Opinion Research Center (CVVM) in September 2016, only 57% said they believed in the president. Since 2015, the percentage of those who trust the president has been oscillating between 45 % and 62 %, whereas the distrust of Miloš Zeman has ranged from 36 % to 51 %. As for sympathizing with Russia, it has never reached the 80 % that Lisková claims. In December 2015, only 27 % of the respondents rated their affection for Russia highly (grading it 1 or 2).

It is disturbing that the Czech Republic is not only viewed in this conversation but also often depicted by the Russian propaganda as a “former Soviet state”. It is precisely the term the Oplot television presenter speaking with Lisková mentions, which ultimately makes pre-1989 Czechoslovakia look like an integral part of the USSR.

Another disturbing case illustrating how contemporary Russian elites misuse history for their own purposes, is the 2015 documentary about the Warsaw Pact invasion of Czechoslovakia in August 1968, an act nowadays misrepresented as a preemptive strike against an imminent coup d’état and NATO invasion.