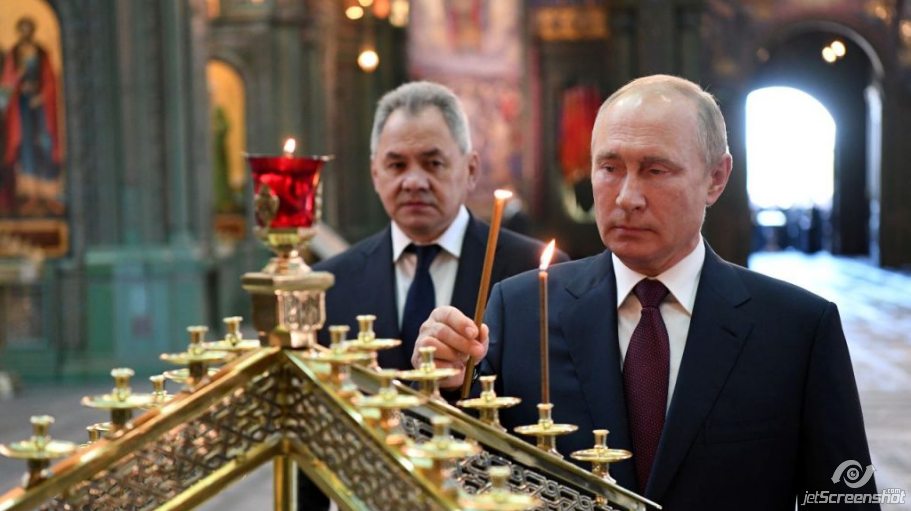 By Walter Clemens, for CEPA

The notion with “God is with us,” Gott mit uns, has been part of Vladimir Putin’s Russian nationalist revival, a boast that is sacrilegious and untrue.

The Putin administration has waged a zealous and accelerating campaign to throttle alien influences. It has closed Memorial and other human rights organizations as alleged foreign agents.

Now the Russian Academy of Sciences and State Duma are discussing ways to restrict influences emanating from abroad. Some officials propose that any contact between an Academy scientist and a foreigner must be authorized by the head of his/her institute; that a third Russian scientist be present at any meeting with a foreigner; and that a meeting report be submitted to the directorate. All correspondence with foreign scientists should be monitored by the institute’s directorate. The possibilities of “digitalization” are also fulfilling Orwell’s predictions about an all-powerful Ministry of Truth.

In the late 1980s, Soviet President Mikhail Gorbachev called for policymaking to be based on “universal values” rather than those of class or Communism. Now, the wheel is turning again as the Putin regime embraces a moral code wordily referred to as “Fundamentals of State Policy for the Preservation and Strengthening of Traditional Russian Spiritual and Moral Values.” It aims to counter Western influences that plant ideas and values deemed alien to the Russian people and destructive of Russian society. These negative values include the cult of selfishness, permissiveness, and immorality, together with any attempt to deny the ideals of patriotism, service to the Fatherland, procreation, and creative work, The West is also accused of demeaning Russia’s positive contribution to world history and culture. This destructive Western ideology is said to harm the national interests of the Russian Federation and requires a clampdown on religious missionary work and other alien influences on Russian soil.

In January, the Deputy Editor of Russia’s last major independent newspaper, Novaya Gazeta (now closed) noted that the document, to be signed by President Putin in May, claims that “collectivism” is inherent in the Russian people.

The document says nothing about the universal values common to many religions. It claims that Russian values emerge from more than a thousand years in which the religious and spiritual values of the many peoples living in the Russian Federation have converged into something termed “Russian World (Russkii mir)” Most Christian churches and other major religions claim to profess universal — not national — ideals. This text, however, never speaks of serving God. Rather, it sacralizes the Fatherland.

The draft presidential decree prepared by the Ministry of Culture in accordance with the National Security Strategy, is expected to be signed by the president next month. Since it provides for an “interdepartmental coordination body,” the descendants of Big Brother may require a Ministry of Values [or Komtsen] as well as a Ministry of Truth.

The Moscow Patriarchate of the Russian Orthodox religion is actively involved in the patriotic undertakings of the authorities. Take, for example, that symbol of modern Russian militarism the Cathedral of the Armed Forces, erected in 2018 in Odintsovsky district, about an hour west of Moscow. Angels hover above artillery, religious images are adorned with Kalashnikovs; the Virgin Mary strikes a pose reminiscent of a Soviet “Great Patriotic War” poster and the entire edifice is clad in khaki-colored metal. In the spirit of Gott mit uns, the cathedral mosaics suggest that God blessed not just the Red Army in World War II but also Russian military actions in Hungary 1956, Czechoslovakia 1968, Afghanistan, and — President Putin’s adventures — in Chechnya, Georgia, Crimea and the “fight against international terrorism in Syria.” A 28-year-old server at the cathedral observed that “only Russians are capable of sacrificing themselves to save humanity, just like Jesus did.” Combined with militarized youth groups such as the Youth Army (Yunarmiia), the cathedral and its surrounding Patriotic Park prepare Russians for heroic wars in the future.

Last month, Russian Orthodox Patriarch Kirill (known as a long-time KGB agent and boss of an illegal cigarette smuggling ring) rapturously blessed Putin’s invasion of Ukraine as a crusade against Western heathenism and gay pride, triggering rebukes by some Russian clerics and Orthodox leaders in Ukraine and beyond.

The russkii mir outlook, orchestrated with Patriarch Kirill, allies with President Putin in his campaign to destroy the Ukrainian state and people. The Russian church, as Alexander Motyl suggests, seems to have lost its soul.

Putin may be hoping that the same fate awaits the Russian people — as it did the spaceship builder protagonist in Yevgeny Zamyatin’s sci-fi dystopia We, banned by Soviet censors in 1921. Not until surgeons removed both his soul and imagination could the rocket engineer live in the world of the Great Benefactor.

By Walter Clemens, for CEPA

Walter Clemens is Associate, Harvard University Davis Center for Russian and Eurasian Studies. His books include Baltic Independence and Russian Empire and Can Russia Change?