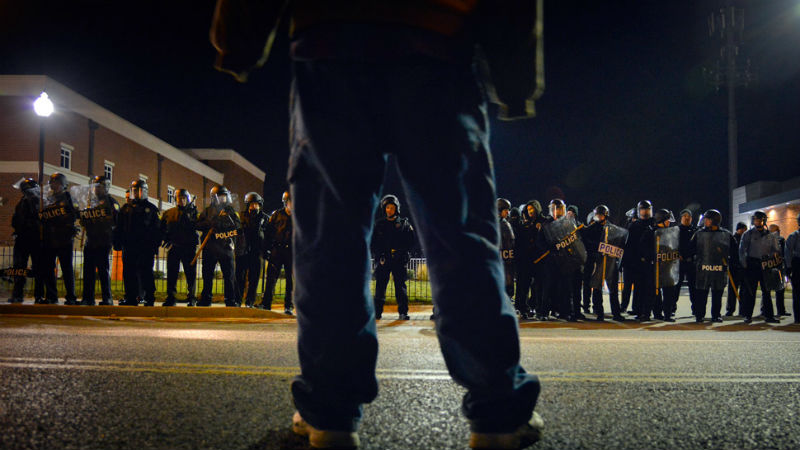 Late on Monday, a St. Louis County grand jury made the decision not to indict Darren Wilson, a Ferguson, Missouri police officer in the August killing of teenager Michael Brown. The controversial decision and the unfolding situation in Ferguson generated much discussion on social media in the US—and, as it turns out, Russians had some opinions as well.

The grand jury’s decision meant no charges would be currently brought against Wilson, although the investigation into the case was still ongoing. Although the decision was not unexpected, it caused widespread consternation and outrage, with Americans staging peaceful protests in cities across the country and many voicing their discontent on hashtags #blacklivesmatter, #FergusonDecision and #JusticeforMikeBrown.

When they woke up to the news, the RuNet users also had some things to say about how events around Ferguson unfolded.

My whole feed is fires, looters, and protest marches. The Grand Jury has decided the police officer from Ferguson is not guilty.

Russians on social media mostly didn’t care for the details of the grand jury decision. Many, like opposition figure Alexey Navalny above, said the police officer, Wilson, was found not guilty, when in reality the jury decided not to indict him, so he would not even be charged or stand trial at this time.

Instead, the RuNet users seized on the topic of continuing unrest, and were quick to draw comparisons between the Ferguson protests and police violence and the continuing Ukraine-Russia conflict. Retweets of news stories and most serious commentary were drowned in a flood of posts where Russians exercised their wits, borrowing heavily from the existing memes and stereotypes.

As before, Russians did not pass up the opportunity to criticize the US for its lack of commitment to democracy, justice and human rights. There were quite a lot of attempts at levity about racial issues, which is how the #Афромайдан (#Afromaidan) hashtag came to be used by many Russian Twitter users to engage in the discussion of what many saw as the African American echo of the Maidan protests and the “separatist” uprisings in Ukraine.

RuNet provocateur and media personality Anton Korobkov-Zemlyansky rushed to point out parallels with the Ukrainian crisis and some of the decisions that the US had supported in Ukraine.

Has Obama already announced an ATO [anti-terrorist operation]? Or will this be left to Hillary after he is deposed and sent to Rostov-on-the-Don?

The first humanitarian convoy is en route to Ferguson.

Drawing more comparisons between Ferguson protesters and pro-Russian rebels and their separatist aims in Ukraine, one user built on the long-running meme about the former rebel leader Igor Strelkov and his uncanny ability to be in the right place at the right time (albeit not without the help of some photoshop skills).

MPR (The People’s Republic of Missouri). Strelkov is already in place!

The issue of sanctions also came up, of course.

In connection with the events in Ferguson we believe it necessary to impose sanctions on the US political elite.

Commenting on the excessive police response, other users compared the Ferguson unrest to the Bolotnaya protests in Russia. Pro-Kremlin blogger Stanislav Apetyan thought there were glaring differences in how the police behaved.

It’s telling that on Bolotnaya on May 6 the police only had shields and batons, and in Ferguson they immediately deployed rubber bullets and teargas. No big deal.

Another Twitter user noted that the troubles of those documenting the protests were also not in Ferguson’s favor.

How Ferguson differs from Bolotnaya: a streamer has his smartphone stolen from him during the live stream.

At the same time, there were plenty of ironic comparisons from the other side of the Russian political spectrum, with users applying the same cliches and stereotypes typically used by Russian propaganda and officials to comment on Ukraine.

[PM] Lavrov is urgently flying to the US, in order to support the peaceful protesters with buckwheat…

Russian state media often accuse the US of secretly funding dissent in Ukraine and Russia, so Pussy Riot’s Nadya Tolokonnikova brought up the funding question as well.

I wonder, whose grants funded the organizing of the protests in New York, Ferguson, and Chicago?

Pussy Riot, who are currently in New York, joined the rally against police violence there last night:

The rather lively barrage of cracks and jokes about Ferguson on Russian social media was too much for some users, who apparently thought them in bad taste.

I want an option to mute all of the Russian-language tweets about Ferguson.

However crude the jokes or ridiculous the parallels drawn, it’s interesting how Russians online seem convinced the events in Ferguson are but a mirror image of the situation in Russia and in Ukraine, where Russia plays a prominent part. Whether events are local or oceans away, the lens for news consumption in Russia is as solipsistic as ever.