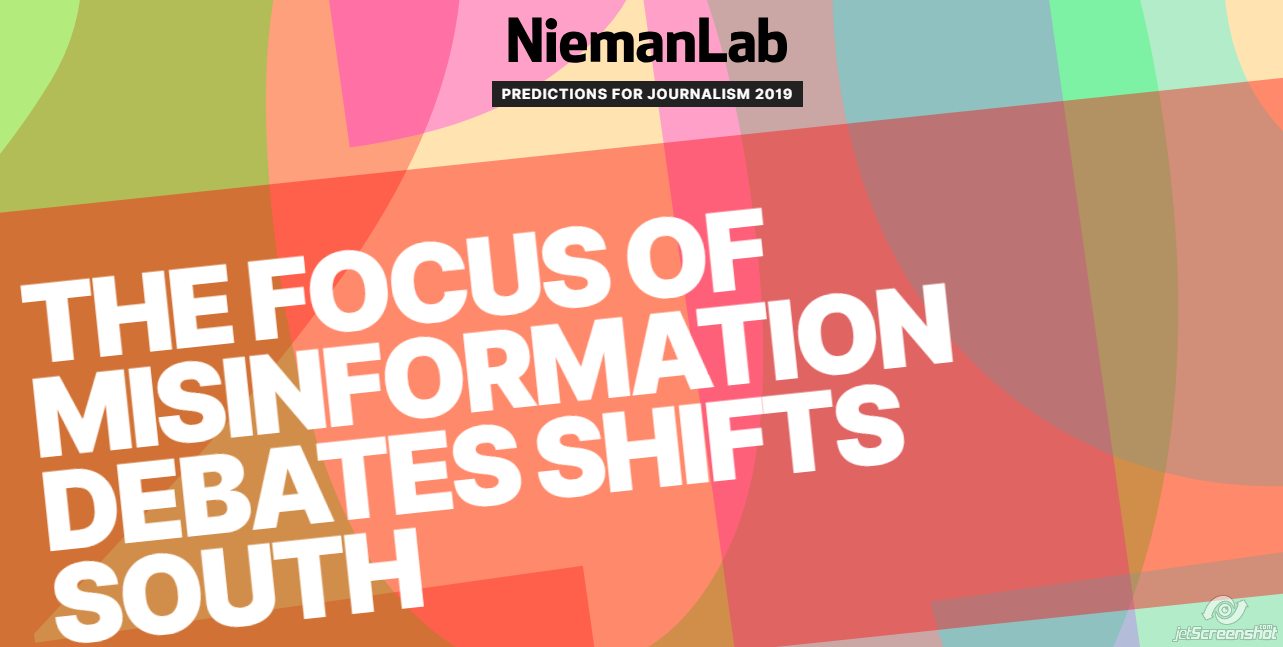 By Peter Cunliffe-Jones, for NiemanLab

“In complex tinderbox societies, the potential for mis- and disinformation to sow not just social discord but real violence is very clear.”

Ever since 2016, when many western newsrooms’ cozy assumptions were shattered by the Brexit vote and the election of Donald Trump, conversations about the impact of mis- and disinformation have been dominated by three underlying thoughts.

First is that misinformation’s main effects are felt in western democracies, or at its most global level, as a continuation of east-west battles.

Second is that misinformation is primarily a problem affecting party politics.

Third is that the way to tackle the problem is clear: We publish evidence-based reports and leave things there.

My prediction for 2019 is that those assumptions will change.

Researchers in the U.S. and Europe have for years studied how political misinformation undermines public trust in democracy, distorts popular understanding of key issues, and perverts outcomes. Since 2016, a key debate has been what the wider media — and fact-checking organizations such as mine — can and can’t do about that.

Political misinformation is, of course, hugely significant for democracies the world over, and politics in the U.S. and Europe dominates world conversation. But squeezed in between 2018’s U.S. midterms and the 2020 presidential elections, 2019 will see landmark elections in two of Africa’s most important countries, perhaps the only ones that get any consistent attention from the outside world: Nigeria and South Africa. Coming after the way misinformation was seen to affect elections in Brazil this year, that’s one reason I think the geographic focus on the impact of misinformation will shift in 2019.

Second, in these countries of the Global South, party politics is perhaps not the most important theatre of misinformation. In the middle of 2018, reports emerged from India of mobs, allegedly inflamed by misinformation on WhatsApp to attack and kill dozens of people across the country. At around the same time, reports claimed misinformation appearing on Facebook in Myanmar helped to spur acts of genocidal violence there this year.

In complex tinderbox societies, the potential for mis- and disinformation to sow not just social discord but real violence is very clear.

Recognizing this, researchers — some working for WhatsApp and Facebook, others independently — are starting to investigate misinformation’s effects so far in the Global South, in Asia, Africa, and Latin America. And the first reports that emerge in 2019 will inevitably focus more attention on these regions and the potential of misinformation on social media to cause real-world violence.

Moreover, the potential harm is not limited to social divisions and violence. In September 2018, my organization Africa Check ran a workshop in Nigeria on health misinformation, attended by stakeholders from mainstream media to the minister of state for health to leaders of the Nigerian Media Association. The workshop heard of messages circulating on WhatsApp that go beyond the widespread anti-vaccine scares to messages urging parents whose children are suffering conjunctivitis to bathe their eyes in battery acid to “cure” the problem.

Research on this issue is being conducted now and details will emerge in 2019, including when the world’s leading fact-checking organizations meet in Cape Town in June. That’s another reason for my prediction.

Third, it’s becoming increasingly clear that the way we seek to tackle these problems in western democracies — publishing evidence-based reports and leaving things there — is not working, at least not as we imagined.

Part of the problem in countries of the Global South is that journalists and civil society lack access to reliable sources of information to check such misinformation against. So media organizations and fact-checkers are turning to partner with other organizations to tackle these problems, as Africa Check is doing with the health community in Nigeria. At the same time, worryingly, authoritarian governments in countries such as Tanzania and Egypt are seeking to close down debate as a whole, with draconian legislation aimed, they say, at tackling so-called “fake news.” Sadly, this approach is also likely to increase in 2019.

By Peter Cunliffe-Jones, for NiemanLab