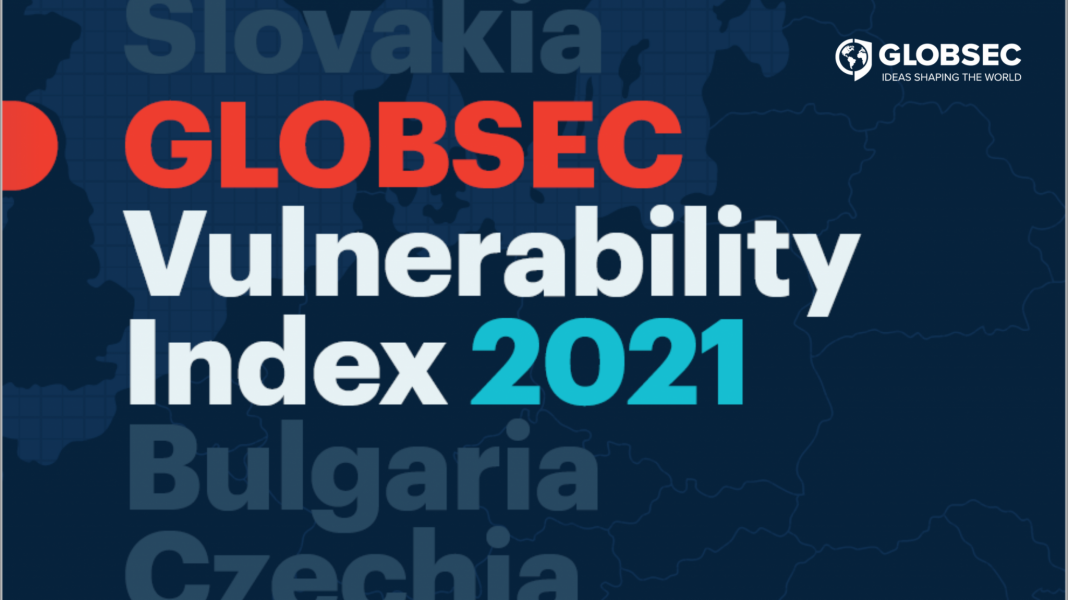 The GLOBSEC Vulnerability Index measures vulnerability towards foreign influence in eight countries: Bulgaria, Czechia, Hungary, Montenegro, North Macedonia, Romania, Serbia and Slovakia on a 0-100 scale, where 0 is the most resilient and 100 the most vulnerable. It assesses five key dimensions: public attitudes, political landscape, public administration, information landscape, and civic and academic space, with a particular focus directed towards the Kremlin’s and Beijing’s activities.

The Index’s importance goes beyond the Central European and Western Balkan regions, however. It is a test of how confrontation of the West against Russia on the one hand and China on the other is playing out in a strategically important part of the world – geographically peripheral members of EU and NATO or countries in their neighbourhood aspiring to membership or partnership.

Several overarching lessons could be derived from the Index results:

First, membership in international structures(the EU and NATO), contributes to a greater resilience from the perspective of common policy solutions, centres of excellence and collective defence, but differences in the quality of public administration, legislation or the protection of electoral integrity contribute to vulnerabilities of respective countries.

Second, mindsets matter often more than tangible structures such as institutions, administrative capacities and hard resources. And mindsets are shaped by the information space which is a delicate construct in all democracies, not to mention the still immature political systems of Central Europe and Western Balkans.

Third, even if over three decades have passed since the downfall of communism, all the countries in question suffer from legacy problems, connected to the instability of political institutions, volatility of public opinion, not to mention deeply entrenched problems of corruption, nepotism, clientelism and beyond.

Fourth, the Kremlin’s influence, activities and the debate about them is more prevalent in the region than the one about the growing presence of Beijing’s interests, which represents both an opportunity for proactive measures and communication, as well as potential vulnerability if the information vacuum is utilized by China first. Russia is far from a new player in the region. It is thus understood better whereas China is an enigma potentially able to disrupt the political and civic systems in the region.

Last, foreign malign activities constitute both a symptom and a cause of the weakness of the analyzed countries. Were China or Russia not present in the region, these states would still be grappling with corruption, state capture or erosion of media freedom. Foreign actions, even if they exploit the weaknesses, should not be understood as an explanation of all the deficiencies the countries in question have.

How do the analyzed countries compare against each other in the above-mentioned five areas of public life? What do the differences mean for the governments and societies? The readers can decide for themselves to what extent vulnerabilities captured in the Index are unique to the studied countries or they constitute a wider weakness of contemporary democracies.

The Index is the result of a two-year project supported by the U.S. Department of State’s Global Engagement Center.