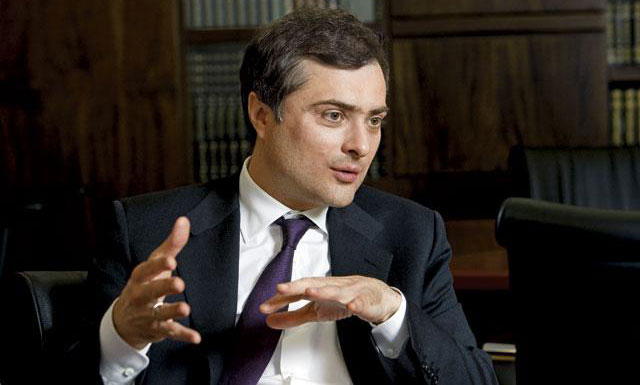 In Soviet Russia, everybody knew that they were being watched. Any deviation from officially sanctioned behavior would be treated with suspicion and most likely punished. The Soviet state saw itself as being at war with almost everything – foreign spies, class enemies, people wearing jeans or playing jazz. The regime’s dominant ideology was not Marxism-Leninism, but suspicion and animosity.

Not since the early 1980s, before the first rays of glasnost in Russia, have those dark times felt as close as they do now. Protecting society from enemies, foreign and domestic, is once again the order of the day. Indeed, an ethos of perpetual vigilance is central to sustaining President Vladimir Putin’s high popular-approval ratings. And no one plays a more important role in creating the necessary public atmosphere than Vladislav Surkov.

Once Putin’s chief of staff, Surkov served as Deputy Prime Minister from 2011 to 2013. He now formally advises Putin on foreign affairs, but is really the regime’s chief propagandist. He has been credited with the introduction of the concept of “managed democracy” in Russia, and he played a leading role in nurturing the secession of Abkhazia and South Ossetia from Georgia. More recently, he was a guiding hand behind Russia’s invasion of Ukraine and annexation of Crimea, inspiring the feverish media campaigns that have delivered near-universal public support for these moves.

Surkov is the man most responsible for nurturing pro-Putin sentiment, which increasingly resembles a Stalin-like cult of personality. Surkov is Chechen by descent, infused – like Stalin – with the saber-rattling mindset of the Caucasus. Under his watch, the central focus of the Kremlin’s communication strategy has been to sustain the perception that the West wants to destroy Russia. Thus, the conflict in Ukraine has been framed as a renewed struggle against fascism – and in defense of Russia’s true, anti-Western identity. The supposed threat to Russia today was underscored for the 70th anniversary of the end of World War II, with billboards springing up across Moscow to remind Russians of the sacrifices that victory required.

Like the Nazi propagandist Joseph Goebbels, Surkov is not overly concerned about facts. Emotions are at the core of the Kremlin’s message; indeed, they are the tie that binds Putin to his subjects. This is why Surkov portrays Putin, who recently divorced his wife of 30 years and is rumored to have fathered several children with a former Olympic gymnast, as an avatar of conservative values, with the Orthodox Patriarch constantly at his side. The Kremlin’s campaign against gay rights has secured the support of the church, while reminding ordinary Russians that the state takes a watchful interest in their lives.

Today’s Russian propaganda combines quintessentially Soviet-style heavy-handedness and state-of-the-art technique. There have been no mass purges and few large rallies. Western values may be under assault, but Western goods are welcome. A common sight in Russia is a shiny German-made car with a bumper sticker recalling the glories of World War II: “On to Berlin” or “Thank you, grandfather, for the victory, and grandmother for the tough bullets.”

For the last two decades, Russians have been able to travel internationally without restrictions. Now, however, many seem ready to give up this right. Last month, the Kremlin warned the country’s citizens that the United States was “hunting” Russians abroad. A few Russians have indeed been arrested and extradited to the US: the arms dealer Viktor Bout, for example, who is charged with providing aid to terrorists, or the hacker Vladimir Drinkman, who is accused of stealing millions of credit card numbers. There is no credible threat to ordinary Russians, yet Surkov’s campaign is having a profound impact.

Rather than risking mockery with outlandish claims – a staple of Soviet propagandists – that Russia will one day surpass the West economically, Surkov taps a deeper and safer emotion: fear. Whatever Russians think of the country’s economic malaise – GDP is expected to contract by 3.8% this year, while inflation could top 15% – they are assured that they would be much worse off without Putin.

And Russians have fallen into line. A few years ago, it seemed that every tenth person wore a white ribbon, a symbol of protest against Putin. Today, one gets the impression that every third Russian is wearing the Ribbon of Saint George, an orange and black symbol of patriotism and loyalty to the Kremlin. Those who do not wear the ribbon can expect to be asked – and not very politely – why they choose not to.

It is an insidious and effective strategy, one that marginalizes dissenters and generates the impression of near-universal support for the regime. On my last visit to Moscow, I noticed that a friend, a singer in the Bolshoi opera, had tied a small Ribbon of Saint George to her white Mercedes. Though she is no fan of Putin, she did not want to stand out unnecessarily.

It is through small surrenders like hers that men like Surkov ultimately succeed. Citizens pretending to be loyal build a culture of conformity. With dissent suppressed, the authenticity of citizens’ loyalty becomes irrelevant. Indeed, like Goebbels, Surkov understands that when public life and private expression can be turned into theater, there is no difference between performance and reality.

Nina L. Khrushcheva is a dean at The New School in New York, and a senior fellow at the World Policy Institute, where she directs the Russia Project