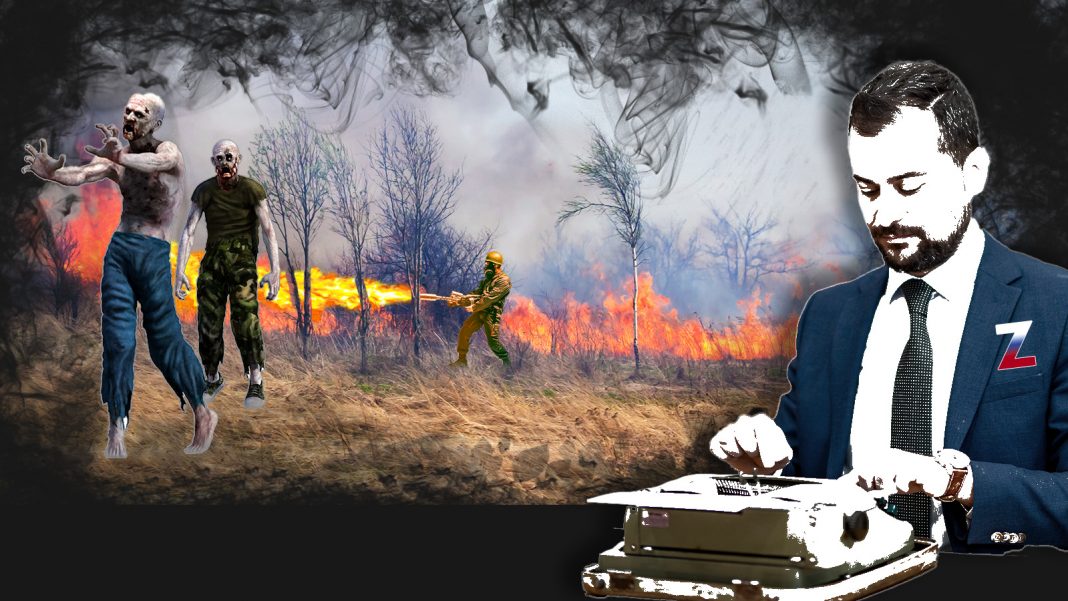 Russian propagandists paint the perfect enemy for the barbaric Z campaign by projecting their own image onto Ukrainians.

When not busy committing atrocities in the areas of Ukraine temporarily under their reign of terror, Russian Z-war combatants seek the ideological blessing of their political masters. To do so, they keep inventing fantastical reasons to justify the immense human suffering that follows their footprints on the battleground.

When fighting off the evil ‘Anglo-Saxons’, the EU, the West, or good-old-bad Nazis is not enough, enter Satan.

We reported in March and even before then that fighting the ‘satanic values’ of the West gives Z-war bandits, in particular Chechen forces, the excuse they need to loot, torture, and kill. These allegedly demonic values include respect for the basic human rights of the LGTBQI+ community.

However, fighting off the mighty ‘Gaytan’ is not going well for the ‘defenders’ of ‘threatened values’. A recent conservative Western estimates suggests current total Russian personnel casualties to be between 70,000-80,000 since the invasion’s start, with several thousand armoured vehicles also lost.

If we believe pro-Kremlin outlets and Russian lawmakers, more harm is on its way for already demoralised Z-war marauders. According to lawmakers’ jaw dropping comments, they will soon face genetically modified Ukrainian super soldiers, an apparent masterpiece of US-funded biolabs in Ukraine. Despite its repeated and thorough debunking, the disinformation narrative about biolabs and biological weapons continues to be one of most beloved lies of pro-Kremlin propagandists.

Finland and Sweden can’t have nice things like NATO membership

On 3 August, the US became the 23rd country to ratify Finland and Sweden’s accession to NATO. Meanwhile, pro-Kremlin outlets and their amplifiers continued their desperate efforts to stop those countries from joining the alliance.

Their key narratives follow classic Kremlin disinformation tropes such as threatening Finland and Sweden with grave consequences, suggesting that Finland and Sweden are acting under foreign (US, NATO) pressure, and insinuating that the Finnish and Swedish governments are acting against the will of their peoples.

In line with their favoured ‘lost sovereignty‘ narrative, pro-Kremlin disinformation outlets also claim that Finland and Sweden are now about to lose their sovereignty and that NATO enlargement threatens Russia and is part of a Western encirclement strategy. As always, this assertion conveniently ignores that only 6% of Russia’s land borders currently touch NATO countries.

Meduza reported earlier this month (more here) about the Putin administration’s messaging guides, which give pro-Kremlin outlets and Russian politicians alike detailed instructions on how to communicate about the ongoing war in Ukraine.

Meduza details in a snippet from the Kremlin guides: ‘One of the goals of the “special [military] operation,” according to the document, is to “fight against the godless,” characterized by the authors as “rapists, thieves, and murderers” who “[don’t] believe in anything”’. The guide offers further guidance to push messages such as, ‘Many of the Ukro-Nazis are open Satanists and followers of hateful cults’.

In addition to a flawless projection of self-image of godless rapists, thieves, and murderers onto their adversary, the Kremlin messaging guides also advocate dehumanising Ukrainians in the communications. As we have written before, dehumanisation and hate speech pave the road to remorseless killing.

In other disinformation news