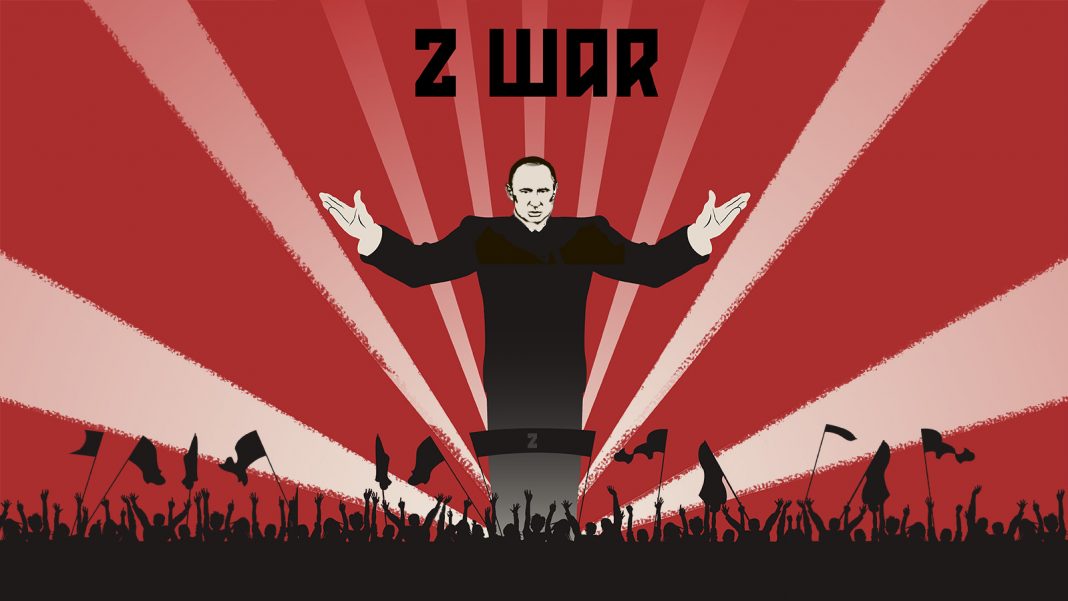 Weeks before the Russian attack on Ukraine, military specialists started to ask about strange markings on military vehicles massing along the borders. Several vehicles sported a white Z-sign on the doors or bonnets and experts tried to understand what they meant.

The Z is an attempt to create a cool symbol of the war. The Z is used for hashtags on social media: “#ZaМир” – for peace. The Kremlin’s precondition for the war was a lie; the attempt to market the war, oops, Special Operation, is a lie. Even the word ‘war’ must not be used; Russian authorities have forbidden media outlets to call the war a war.

The Latin Z functions as a recognisable tag kids can draw on the walls. The corresponding Cyrillic letter З looks like the digit 3 (three), and using that would have opened an avalanche of jokes, referring to the school mark 3 – the lowest approved – “Sufficient”. The Russian word ”троечник” is generally translated as “looser”. Specialists in marketing would call this bad optics.

The Russian journalist Maksim Trudolyubov writes in an essay that for several years the Kremlin has created an illusory Russian state, where anything real has been disregarded as “foreign”, “extremist” or “terrorist”. Writer Peter Pomerantsev wrote about this in his 2014 book Nothing is True and Everything is Possible. Long-time Kremlin aide Vyacheslav Surkov, a professional playwright, has conjured up a state ideology, based on a system of post-modern illusions.

In this context, a cute hashtag is no less important in a military operation than ammunition and diesel fuel for the trucks and tanks.

But the Z is not merely the Armed Forces symbol for the war against Ukraine. The Kremlin attempts to market the Z as a symbol of Russian unity. We meet the Z in a petition from a collection of fairly unknown writers expressing support for the attack on Ukraine. The regional council in Rostov, neighbouring Ukraine, has changed its spelling using the Latin Z. We see the Z in a video of young men in black shirtschanting the name of the leader. The agitated gentleman in the video condemns the voices in Russia, protesting the war:

Some people, here in Russia, pretending to be activists, use hypocritic slogans like “I am ashamed” and call on people to protest. The streets of Russia are the home front of our armed forces and we will not leave them without protection. The mission will be fulfilled.

And we meet the Z in a chilling action, set up by the management of a hospice for children, dying from leukaemia. The children were lined up outside the hospice to form the letter “Z” to demonstrate support for the war.

Bombs are falling on Ukraine, Russian military is targeting civilians. From Moldova by the Black Sea to Poland, several hundred thousands of Ukrainians are seeking a safe haven outside the war zone. Sunday 6 March, Russia organised a nationwide choral festival, mobilising singers from all over the country to sing “ZаМир” – “For the Peace”.

But the Z is not only a way of lying about the war. As we saw from the quote above, Russia’s enemy is within as well. Under the banner of the Z, Russian civil society and all forms of dissent are under attack. One of Russia’s oldest and most respected civil society organisations, Memorial, has been branded a “Foreign Agent” and forbidden to work in Russia. The offices of the organisation were “searched” by police, who left a message to the remaining staffers: “Memorial is finished” – and a large, carefully doodled Z. Memorial was misspelled “Memoreal” to begin with, but a police officer who actually could read and write corrected it.

We have no idea about the decision processes that preceded the illegal and brutal attack on Ukraine, but establishing a ‘cool’ symbol seems to have been a priority. Now, the Z has come to be a visible symbol of aggression against a peaceful neighbour and oppression against Russia’s own people.