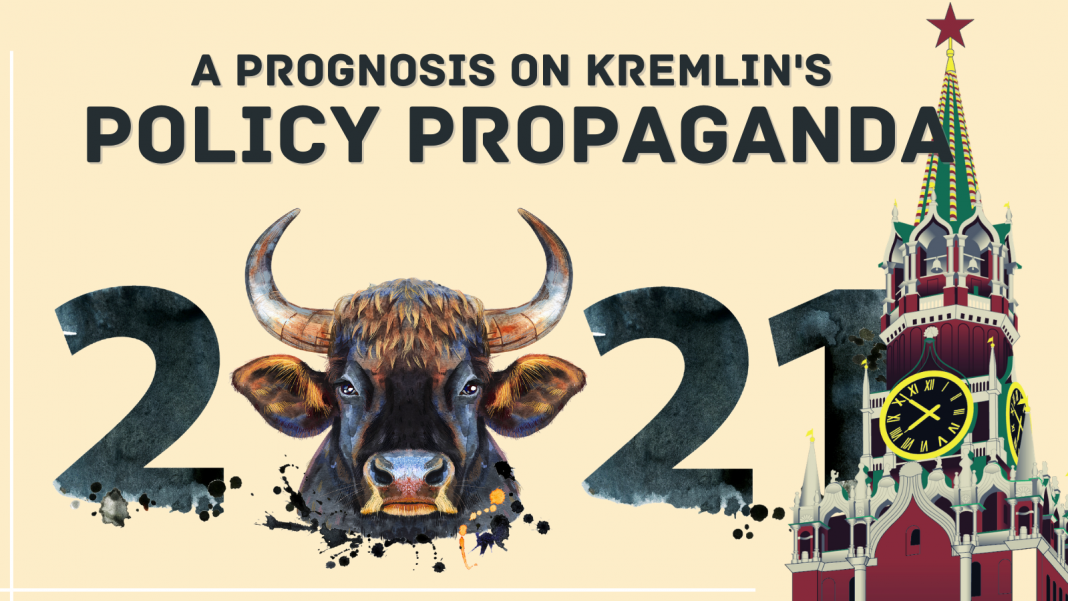 According to the Chinese zodiac, 12 February 2021 marked the beginning of the Year of the Bull. The word “bull” has several meanings in English. The first is, obviously, a bull: a specimen of male bovine cattle. Strangely enough, the word also denotes “empty, boastful talk”.

Since early February 2021, EUvsDisinfo has noted how Kremlin officials have started to intensively honour the Year of the Bull. One example here; some more here… We have demonstrated the Kremlin’s ideology of national whataboutism and the effect of said bovine’s faeces on the public discourse.

EUvsDisinfo has collected empty, boastful talk from the Kremlin for over five years, and the corpus of cases of bull allows us to see how certain patterns appear. We have written about Kremlin storytelling; how the disinformation mirrors age-old principles of narration, and we have identified a few dominating story lines, narratives, in the celebration of the bull.

For some, Russia’s Ministry of Foreign Affairs is only peripheral when it comes to Russia’s foreign policy. Nationalist ideologist Alexander Dugin writes in an essay that foreign policy in Russia is made up by one single person:

Any observer with a minimal insight in the issue knows the answer to the question on who is setting up foreign policy in Russia. The answer is unambiguous: no one but the President of the Russian Federation, Vladimir Vladimirovich Putin.

Even if some doubt Russia’s Ministry of Foreign Affairs’ credentials in foreign policy shaping, it is certainly significant in communicating policy. Any time the Kremlin violates international law, human rights or even Russian law, the Ministry’s job is to pretend that Russia adheres to a “Rule Based Order” and that everyone else is much worse. Bull, to put it shortly.

The weekly briefings of the Russian Ministry of Foreign Affairs is something of a ritual of pro-Kremlin bull. A sermon of sarcasm; a homily of hahaganda; a worship of whataboutism; a litany of lies. A standard briefing lasts around 90 minutes and is, as a rule, performed on Thursdays by the Ministry spokesperson Maria Zakharova, delivering the Bull of the Week. Most of the content is regurgitated from week to week, familiar, well-known tropes and speaking points.

This highly repetitive ceremony allows the EUvsDisinfo to offer a detailed prognosis on what bull to await for the upcoming year.

This first category contains long-term, strategic bull. The aim is to project an image of Russia as a world power, curbing the ambitions of aggressive foreign actors; the US, the EU, NATO etc.

Bull on the West

Allow me to remind you of some recent events in those countries – riots, violent clashes between protesters and the police, the use of all possible methods and means of suppressing protests, including firearms as in the United States some time ago. There is the never ending escalation in the level of violence, as we note. This is what our partners need to pay attention to – the situation in their own countries, and not try to rock Russia’s boat.

A catalogue of whataboutism. Ms Zakharova attempts to deflect criticism aimed at Russia, while pointing fingers at others, lining up randomly selected and emotionally loaded claims. Similar claims were forwarded here and here, and will be used again.

A quote from the 4 March Briefing, but similar lines can be found here. No other category of bull is more frequently represented in the EUvsDisinfo database: a staggering 4 000 cases – almost a third of the total number of cases in our database target Ukraine. Over 250 cases insist a coup d’état took place in February 2014. Almost 700 cases concern Crimea, aiming to deny illegal annexation. 321 cases attempt to describe Ukraine as “fascist”.

The regime change in Kyiv in February 2014 was not a result of a “coup”, but occurred as the incumbent President Yanukovych, unexpectedly and secretly, deserted Kyiv on February 22. As the whereabouts of the President were unknown, the Parliament Speaker assumed, according to Ukraine’s Constitution, the role as acting President.

The “referendum” in Crimea violated not only Ukrainian and international law, but also Russian legislation on referenda and elections; the process was flawed, both in terms of procedural and technical demands.

This category of bull reflects the current news cycle and the Kremlin’s ambitions to spin certain topics. There are uncertainties in this prognosis, as the global news cycle is hard to predict. A few topics will, without a doubt, appear.

Bull on the Pandemic

All they seem to want is to keep up anti-Russia propaganda under any, even the most absurd pretexts, believing that would make our country “pay the price” (as Josep Borrell himself put it) for its independent foreign policy line and obvious successes in fighting the pandemic.

The Kremlin does not disclose data on the progress of its vaccines campaign. Statistics from Johns Hopkins university from early March show that less than 1 per cent of Russia’s population has received vaccination. EU average – 2.48%.

Bull on the Navalny Case

We are convinced that the so-called “Navalny Case” is a set-up, artificially blown up to international levels for creating a false agenda in the information space in order to distract the global community from the real current issues, as an instrument for involvement in the internal affairs of our state.

A conspiracy theory, presented without any evidence. The Foreign Ministry has parroted Kremlin talking points on “the absence of evidence” at several occasions; a few examples: here, here, here:

The attempted assassination of Alexei Navalny, a leading voice of dissent in Russia, is a fact. The use of military grade, forbidden chemical substances has been proven by laboratories in Germany, France and Sweden. Russia has refused to open a criminal investigation into the fact that a Russian citizen falls acutely ill on a public means of transportation, showing obvious symptoms of poisoning. The swift action by the pilot of the aircraft and the professionalism of the ambulance staff at Omsk airport saved Mr Navalny’s life. Russia violated, again, its international commitments to disarmament of chemical weapons and to human rights.

The EUvsDisinfo database contains over 300 cases of disinformation, targeting Alexei Navalny. Most of the cases have appeared after the assassination attempt in August 2020.

Other examples of topical bull that can be awaited are MH17, Russophobia and comments on US news.

We suggest the European Union to change its tone of accusations. We call for a dialogue based on facts and on issues. We are ready for that dialogue, even in public. We have things to talk about. And of course, EU needs to refrain from the mindless rhetoric of confrontation and switch to a format of a constructive dialogue with our country based on equal rights and mutual benefit.

Accusations of other powers seeking “confrontation” is a Ministry’s bread-and-butter comment. Here, for instance, or here, or here. Pro-Kremlin disinformation efforts are a fact and an issue. The EU will continue to seek dialogue with Russia at all relevant levels, with all relevant stakeholders. Almost 250 cases in the EUvsDisinfo database concern claims of foreign powers attempting to “encircle Russia”.

Hahaganda is a core element of Kremlin rhetoric and a staple in the Ministry Briefings. Some elements appear frequently – sarcastic terms like “our Western partners” and “our esteemed colleague” are used condescending and with an intention to belittle and defame. The Year of the Bull will endow us with several examples of ministerial humour.

All the nonsense that is now being issued publicly or through EU institutions’ accounts on social media, we will respond to it with clear argumentation and truthful factual information.

Many, unfortunately, still believe in this inculcated nonsense.

Repeated thunderous statements that no one, except Moscow, could perpetrate this cyber-attack because it is impossible to implement such an attack without using a special state resource are absurd. This amounts to a pseudo-legal position and nonsense.

The British government has come to the correct conclusion that the term “highly likely” no longer makes any sense.

Most likely, these fantasies (and this is how they should be qualified) should be considered in the context of London’s tactics of accusing Russia in their preferred “highly likely” style we know so well

It is highly likely that our esteemed colleagues in Russia’s Ministry of Foreign Affairs will continue producing nonsense. The Year of the Bull has only just started.