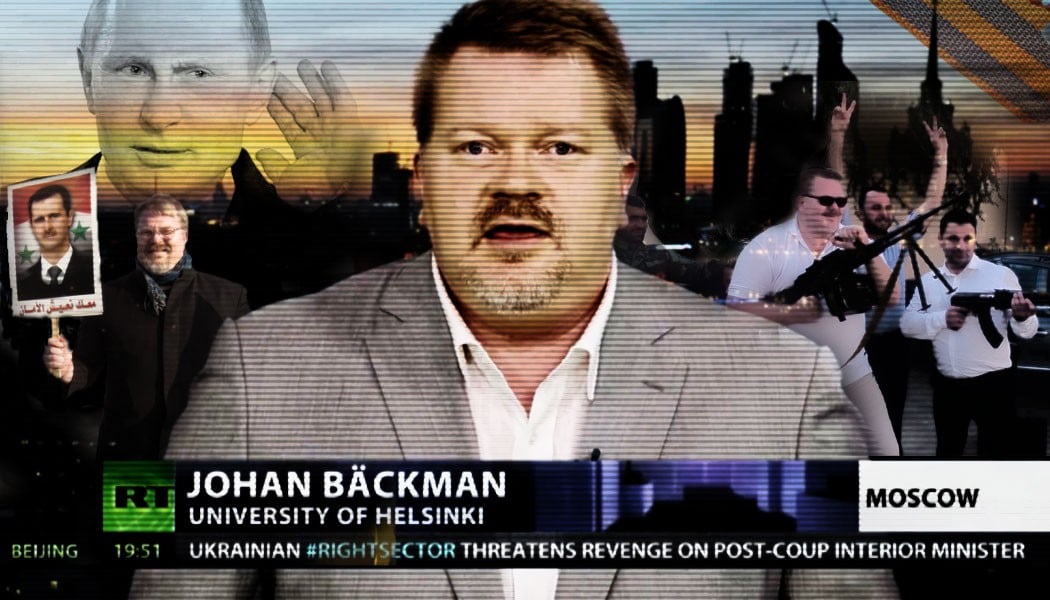 The Kremlin’s Voice, is a new UpNorth series profiling some of the most outspoken cheerleaders and spokesmen for the Putin regime around the world: former diplomats, academics, journalists, music stars and even movie stars who use their public profiles abroad to become international transmitters for the Kremlin’s propaganda messages.

We start this series by profiling a Finnish academic, Johan Bäckman, who in Finland is broadly considered to be a political bully and whose tactics and antics have raised questions about the motivations for his actions which are very logical and consistent with the overall interests of Vladimir Putin’s regime.

As is typical of the Kremlin’s proxies abroad, Johan Bäckman often portrays himself as an academic and a human rights activist. He is an adjunct professor (also called docent which is a title and not necessarily a position) of criminology and legal sociology at the universities of East Finland, Tampere and Helsinki. Being an academic, he is able to legitimize his opinions in media and present himself as an authority.

Bäckman was born in 1971 near Helsinki to a wealthy family. He attended an elite high school in Helsinki, the Sibelius-lukio, for musically talented and eventually graduated Helsinki University majoring in political science. During one period he worked at the University’s Institute of Criminology and Legal Policy. He wrote his doctoral thesis on media coverage of Russian and post-soviet organized crime in Finland.

Norwegian Documentary about Bäckman, “The Spokesman”

Bäckman’s father was a CEO for Finnish beverage giant, Hartwall, which is today a subsidiary of of the Danish Royal Unibrew corporation, which is known for its brands, Heineken, Pepsi, Vichy, Jaffa, Mountain Dew, Lapin Kulta and Foster’s. Johan Bäckman is considered a heir to this his family’s fortune. Thus his finances are seldom questioned.

Johan Bäckman has published academic works with Finland’s National Police Academy, which published his doctoral thesis in 2006. Bäckman also edited a collection of articles about Finlandization for a large publishing house, WSOY, as early as 2001.

Bäckman has frequently voiced concern about Finnish social services’ treatment on children. Bäckman only comments when one or both of the parents is of Russian origin. Such child custody issues provide Bäckman with extensive news coverage in Russian media. What is often left unmentioned is that Bäckman  lost custody of his own daughter whose mother is Russian.

What has Bäckman been up to in Finland and Estonia?

In 2007, Bäckman became very active in Estonian politics when a Soviet Red Army monument was relocated from the center of the capital, Tallinn, to a large war cemetery. It was at this moment that Johan Bäckman emerged as a public figure, becoming highly visible in Finland and Estonia when he captured mainstream media attention when he organized pro-Soviet demonstrations. He later wrote and published a highly controversial book “”The Bronze Soldier: The Backdrop and Content of the Estonian Monument Debates” about the incident in which he openly denied the occupation of the Baltic States, calling it a “myth.” A group of leading Estonian and Finnish cultural figures, including Sofi Oksanen, Imbi Paju, Iivi Anna Masso, Elhonen Saks and others wrote an open letter to the University of Helsinki comparing Bäckman’s denial of the Soviet occupation to those who deny the Holocaust.

Bäckman actively supported his “Anti-Fascist” Committee’s Estonian colleague, Arnold Meri in 2008, who was charged with the crime of Genocide for working with Soviet authorities and organizing the deportation of Estonians to Siberia – a crime to which he confessed. According to the Estonian prosecutor’s office, Meri’s victims were primarily women and children of whom dozens were killed during deportation. Meri was subsequently awarded the Russian Order of Honor when he died in 2009, by Russian President, Dmitry Medvedev.

In 2007 Bäckman wrote a highly offensive pamphlet about a Finnish MEP, Heidi Hautala, who was at a time connected to Andrei Nekrasov, a Russian director who was once critical of the Putin regime but who has recently emerged as a pro-Kremlin propagandist producing a film supporting Kremlin agents who stole $230 million during the Magnitsky affair.

Johan Bäckman has his own publishing company in Russia called Johan Beckman publications which is part of his Johan Beckman Institute. Some of his works, mostly consisting of interpretations of Finnish and Russian history, can be viewed here.

Bäckman is keen to influence decision makers in Finland and actively organizes seminars and roundtables as the representative of Russian Institute of Strategic Studies (RISS).

Bäckman published a pro-Russian Ukrainian separatist propaganda book by socialist Matti Rossi. The propagandist book, the title of which is translated to “Donbass Rises From The Ruins” (Raunioista nousee Donbass), was distributed to all 200 members of the Finnish parliament with a cover letter stating that members of parliament should oppose NATO and US influence in Finland.

Another way Johan Bäckman attempts to influence public opinion is by calling for criminal investigations. One of his latest targets has been a reporter from Finland’s national broadcasting company, YLE, Jessica Aro. However, Bäckman himself is now under criminal investigation for  defamation against Miss Aro. 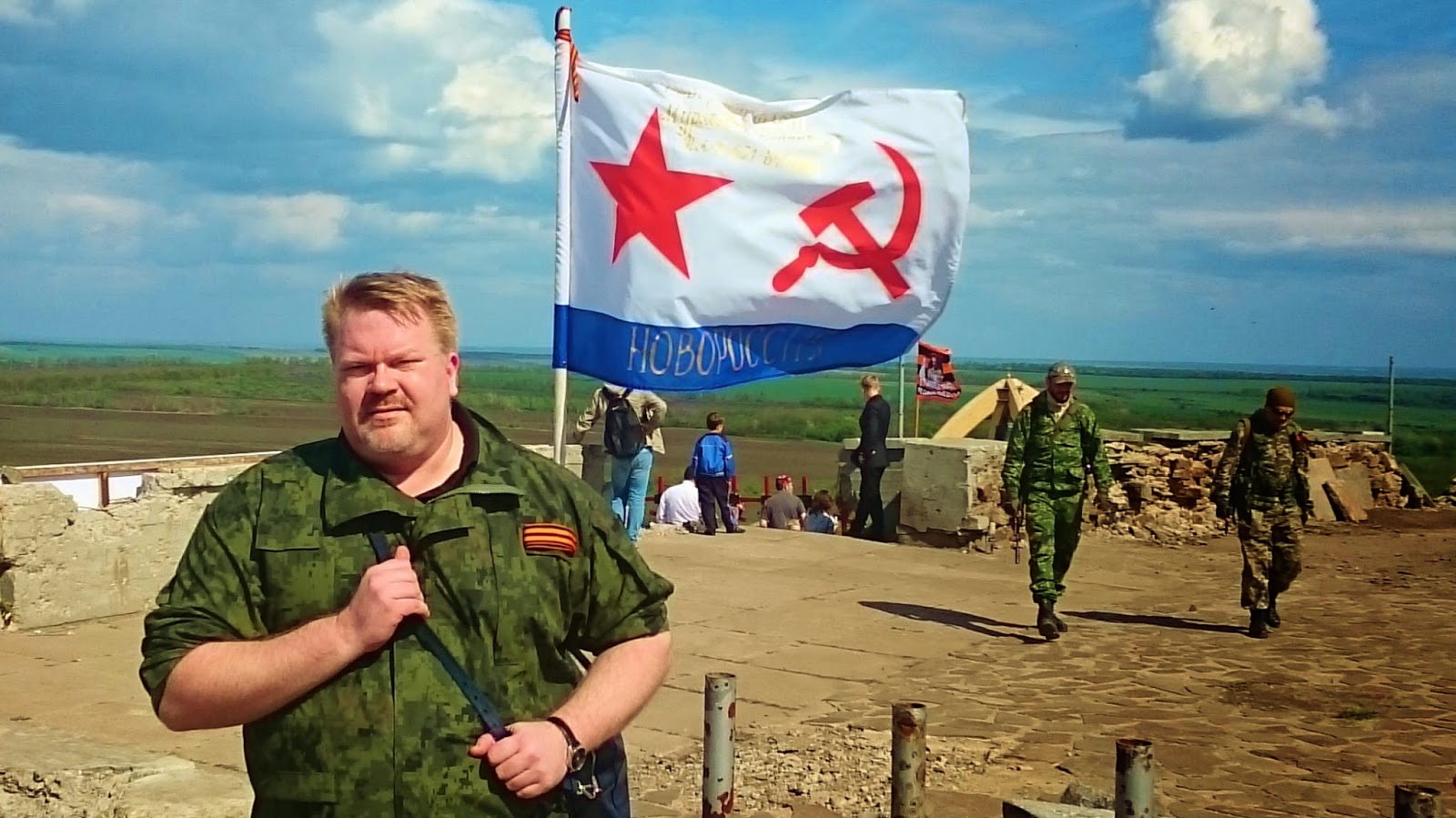 After the Maidan uprising in Kiev and Russia’s annexation of Crimea, Bäckman has enthusiastically defended Russia’s ongoing military action in both Crimea and Eastern Ukraine.

He acted as an electoral “observer” when Kremlin authorities organized a “referendum” in Crimea to cut ties with Ukraine in 2014 along with members of European far right. According to Bäckman he was invited to the participate in the “observer” mission by the Kremlin.

He also has had various other tasks as an “observer”, this summer in Donetsk and Luhansk area.

After Russia’s war against Ukraine Johan Bäckman carved out a niche for himself as a self-declared representative to Donetsk and Luhanska and even earned dubious recognition from Donetsk separatist leaders. He has set up the so-called “embassy of Novorossiya” in Finland, representing all Novorossiya in the European Union. His “embassy” is caved up in the study of his best friend and Stalinist, Petri Krohn.

Johan Bäckman is actively inviting and organizing visas and travel for Finnish citizens who wish to volunteer to fight along the Russian-backed separatists in Donetsk and Luhansk. To date, there are four. The blog entry which encourages his fellow Finns to join the Kremlin sponsored terror groups in Eastern Ukraine reads like a description from a travel company tour description: “travel to Donetsk begins with a flight to St. Petersburg or Moscow and then to Rostov Don (Rostov-on-Don) and from there by car to DNR Russia and across the border between the Donetsk region. Donbass can be driven directly by car from Finland via Russia, if you want to. Voluntary service is not paid a salary, but volunteers are entitled to daily allowances.” In 2014 Bäckman also tried to recruit individuals to help with teaching the “Novorossian army” to ski.

Just weeks before Russia started its military operations in Syria, Johan Bäckman appeared along a Russian delegation in Syria. He declared Bashar al-Assad to be a strong leader, publishing a photograph on himself shaking hands with Assad on social media. 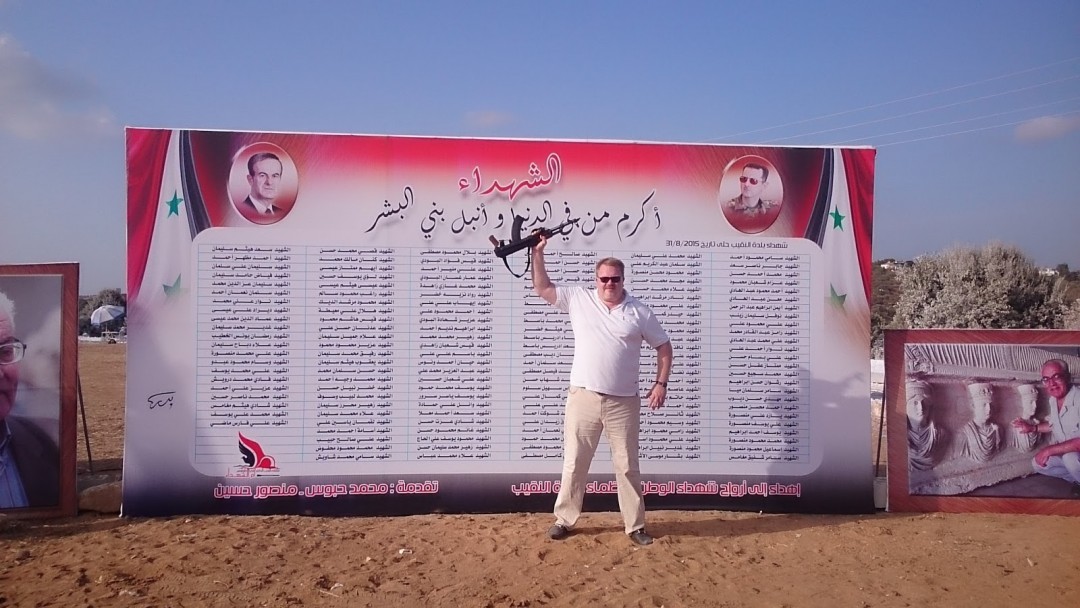 POSING WITH WEAPONS: Johan Bäckman says he is ready to fight for Syria, if necessary. Photo: aldrimer.no and JOHAN BÄCKMAN’S PRIVATE ARCHIVE

Bäckman appeared in Moldova several times up until 2014. He attended conferences as a speaker and gave interviews as an “international expert”. In his blog he writes that he has been to Moldova, for work, six times. Bäckman once appeared in Moldova with Russia’s deputy prime minister Dmitry Rogozin, who is the founder of the Russian neo-fascist organization, Congress of Russian Communities, which calls for the reconstitution of the Soviet Union by either peaceful or forceful means. Bäckman ranted about the horrible consequences of Moldova joining The European Union, advocating for Russia’s interests in keeping Moldova away from the EU. Bäckman’s activities in Moldova came to an end when he was arrested and declared persona non grata in May 2014.

Besides the aforementioned Donetsk embassy role-play, Johan Bäckman is a representative member of The Russian Institute of Strategic Studies in Northern Europe. RISS’s chief Leonid Resetnikov previously worked as the head of Russia’s foreign intelligence service, SVR’s, analysis department.  Resetnikov joined RISS in 2009 and Johan Bäckman was appointed in 2013. Before that Bäckman was a guest speaker at RISS seminars in Russia as early as 2010. Around 2012 Bäckman was eagerly promoting the Eurasian National Front, which is a fraction of All-Russia People’s Front, a nationalist organization led by president Putin. The Eurasian National Front’s interest is to create the conditions for establishing a Eurasian Union to counter The European Union. Recently this front has focused on legitimizing the people’s republics in Eastern Ukraine by handing out medals to individuals who have PR value.

There are three leaders in The Eurasian National Front. One of them is Bäckman, along with Dmitri Jermolayev. Jermolayev, in addition to reportedly being a Russian intellgence officer,  is the editor in chief to Rossiskiye Vesti, a newspaper founded by The Kremlin. Jermolayev is married to Nadezhda Jermolayevna, a reporter at Rossiskaya Gazeta, which frequently interviews Bäckman and specializes on articles that are negative towards Finland.

Dmitri Jermolayev has been declared persona non grata in Latvia and Johan Bäckman to Estonia.

Johan Bäckman also has ties to the Russian Liberation Movement (NOD), who looks to “liberate Russia from under the US influence”. The organization is considered ultra-nationalist and even neo-fascist. The organization operates in several Western countries including Finland, Canada and The United States. Johan Bäckman is well known to be a friend of the NOD’s representative in Finland, Olga Tshcick-Kinnunen. They have co-operated on propaganda concerning Finnish child custody issues since 2008.

@MikaelSkillt If you cross the border, we kill you, you Swedish Nazi swine

Johan Bäckman has very good connections with members and agents of the Putin regime and Russia. He is popular in the Russian media and is utilized whenever a foreigner is needed for an interview in order to support the Kremlin’s narrative. As is true with many of the Kremlin’s proxies in the Western world,  Bäckman’s status as an academic means that the public will take him seriously.

Johan Bäckman on RT from Moscow agitating about the Ukrainian situation

Bäckman’s connections in Russian society are diverse and exist at various levels of government, from media and academics to parliament members and deputy ministers. He is a clever man with fairly good social skills and demonstrates an ability to get things done, and producing results. His motivators remain unknown but he maintains a lifestyle of frequently traveling between Helsinki, Donetsk, St. Petersburg and Moscow. He should be considered a unique and remarkable risk to the Nordic narrative. His activities should cause serious concern and require greater study beyond the neo-fascist and brutish nature of this clown-like caricature.

The Propaganda Relief Collective is a group of concerned international journalists and activists who seek to unmask and expose the Kremlin’s proxy voices around the world who misrepresent themselves as impartial and independent observers and analysts.