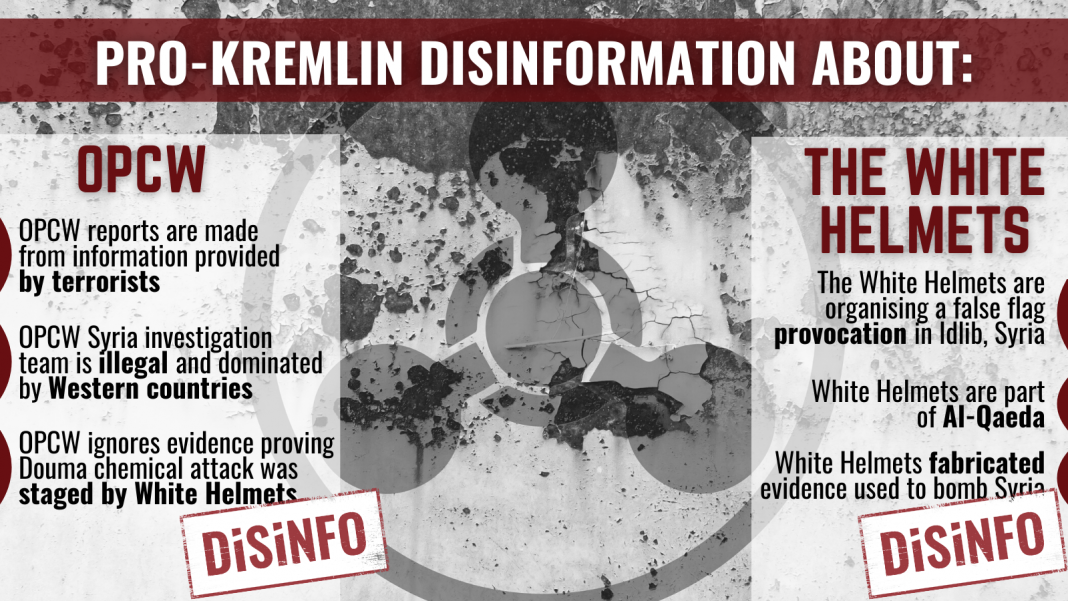 Russian Reconciliation Centre for Syria – a Key Purveyor of Disinformation

Despite the number of reports and the corroborating evidence presented over the years, the chemical file has been a fertile ground for recurring disinformation narratives from Russia and the Syrian regime.

Efforts at manipulating public opinion have particularly focused on delegitimising the objectivity, impartiality and independence of the OPCW – the 2013 Nobel Prize laureate – in an effort to deflect blame and avoid accountability for what possibly amounts to war crimes and crimes against humanity.

At the core of these efforts is the Russian Center for Reconciliation of Opposing Sides in Syria (RCROSS), a key purveyor of disinformation.

The Russian Reconciliation Centre’s role is manifest when revisiting the facts lying under the chemical warfare. But what are those facts?

On 21 August 2013, the Syrian regime launched a chemical attack on the civilian population in Ghouta, just three weeks before officially pledging to comply with the Chemical Weapons Convention. Over the next five years, the regime would commit an average of seven chemical attacks annually.

By April 2018, the United Nations had confirmed 39 chemical attacks perpetrated since the beginning of the conflict, 33 of which are attributed to Damascus; those responsible for the remaining six “have not been sufficiently identified.”

On 12 April 2021, the Investigation and Identification team of the OPCW sent a report to the UN Secretary General which concludes that units of the regime’s Air Force used chemical weapons in Saraqib on 4 February 2018.

The overarching narrative informing these claims paints any perceived adversary of the Assad regime as a terrorist proxy tasked to stage a “false-flag” chemical attack, which could then be plausibly blamed on Moscow’s embattled ally and used as a pretext for Western military intervention. The regime had already used this tactic at the beginning of the Syrian uprising. When a decade ago, Syrians peacefully took to the streets to protest against the arrest and torture of some schoolkids, the regime blamed alleged foreign conspirators, called the protesters terrorists and violently crushed the spontaneous uprising.

When evidence of chemical attacks started emerging, the regime and its Russian ally launched a massive disinformation campaign.

Many of these alleged provocations have been blamed on the White Helmets, an organisation which occupies a special place in pro-Kremlin demonology. But, evidently for the sake of variety, similar accusations were also levelled against “terrorists,” “foreign media,” “France and Belgium,” and others.

An early example of this disinformation claim is a Sputnik article which cites a “military and diplomatic source” as saying that an unspecified “European country” commissioned Al-Jazeera to stage and film a bogus chemical attack in Syria’s Idlib province. In its response, the Qatari news agency pointed out that Sputnik’s claims questioning the authenticity of previous chemical attacks had been refuted “by other impartial agencies and the Independent International Commission of Inquiry,” and that such allegations amount to libel punishable by law. Two days later, Sputnik doubled down on the claim and, instead of providing any supporting evidence, simply said that Al-Jazeera had “denied these allegations.”

Now, let’s set aside the fact that a successful “false-flag” manoeuvre of this sort would require superhuman levels of precision and logistical expertise, as well as perfect cooperation of possibly thousands of people in the area. The cunning of these claims lay elsewhere: they are literally impossible to debunk. They are unfalsifiable statements.

An unfalsifiable statement is so lacking in positive evidence, or reliant on so many assumptions, that it’s not possible to disprove it. This does not mean the statement is a bullet-proof factual claim. On the contrary, it simply means that there is no way to evaluate its merits.

As such, Moscow’s messaging on the chemical attacks in Syria closely adheres to the general model laid out in a 2016 study by the RAND Corporation, which examines pro-Kremlin disinformation from the perspective of social and experimental psychology. Under this approach, a set of claims comprising a particular narrative need not be factual or even internally consistent. Instead, emphasis is made on sheer volume, which makes a narrative more persuasive; and on repetition, which “leads to familiarity, and familiarity leads to acceptance.” In 2018, Russian state media have employed the same model in their coverage of the 2018 Skripal poisoning (see pp. 101-14) and the chemical attack in Douma.

Regarding pro-Kremlin reporting on chemical weapons use in Syria, a December 2018 analysis by Bellingcat demonstrates well the rift between the amount of coverage and the actual evidence supporting these claims. Although no fewer than 22 identified articles warned of an imminent provocation with the use of chemical weapons, “no chemical attacks were accurately predicted,” not least due to the fact that the “sum of all verifiable evidence provided was a single 9-second video clip and a single image.”

A sample of Syria-related news reports published by RT and Sputnik in English seems to confirm that RCROSS pays little heed to logical coherence when formulating its divinations. The latter can be grouped into two rather conflicting sub-narratives.

Under the first one, enemies of Syria are preparing to stage a fake chemical attack scene without the actual use of toxic chemicals, so purely for the sake of throwing together a convincing bit of video footage. In 2017, the rogue actor was Al-Jazeera acting on the orders of a “European country”; in 2020, White Helmets cooperated with “local terrorists”; and in March 2021, it was “militants” representing the Hayat Tahrir al-Sham organisation. The only evidence which the Russian military provided of these forthcoming provocations consisted, respectively, of testimony from “local residents,” “several independent sources,” and “information.”

According to the second sub-narrative, the designated anti-Assad bogeyman is also planning a chemical attack, only this time said attack is going to be real – complete with “victims and injured among the residents” – in a bid to “accuse the Syrian [regime]’s forces of using chemical weapons against civilians.”

Repeating a lie does not make it true

As illustrated with such overview, RCROSS together with pro-Kremlin media and Syrian pro-regime media have been distorting facts, amplifying conspiracy theories and fueling adversarial narratives vis-à-vis Western countries and international institutions (OPCW, EU, UN) with a view to rewrite history and whitewash the responsibility of the Syrian regime.

After a decade of chemical and narrative warfare, it is about time to revisit history with facts rather than rewriting history with lies.

EUvsDisinfo has been continuously exposing, documenting and disproving pro-Kremlin disinformation narratives around the chemical attacks in Syria since 2011. Examples here, here, and here.

For more information, dive deeper into our database of Syria-related cases.