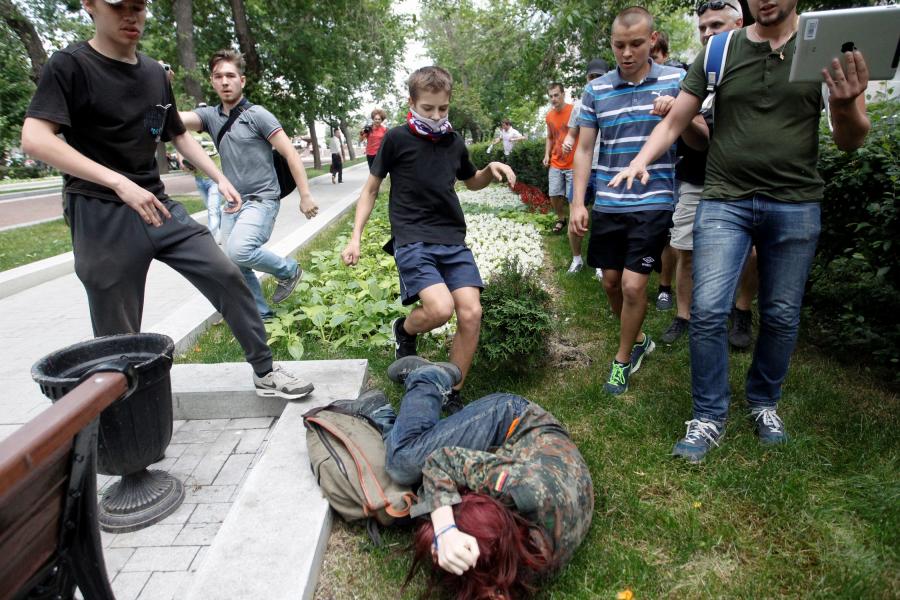 Russian propaganda, which has reached an unprecedented scale, is readily compared to its Soviet ancestor. Indeed, the similarity of maneuvers often reaches the absurd and now the tale of a Soviet agitprop about AIDS having been developed by Americans is reproduced in the form of allusions or even direct accusations aimed at the USA concerning the creation of the ‘biological weapon’ which has come to be known as the Ebola virus. And even patriotic posters – masterpieces of Soviet propaganda – which were thought to have been confined to taking pride of place in the collections of lovers of the genre forever – have reemerged today in the form of memes: no less patriotic or absurd, which have flooded Runet.

It is common knowledge that everything new is well forgotten old, and it is only logical that even the same main enemy has been selected today – the West – in keeping with the best traditions of succession. However, the crucial difference between the two approaches lies in the fact that Soviet propaganda presented Western capitalism as an enemy and confronted it with communism as an alternative model for development, whereas today the West has become purely ideological opponent: embodying a certain mentality and a set of values. Against the backdrop of the systemic crisis of the Russian resource-based economy, even the most rabid agitators do not undertake to speak seriously of the existence of an alternative method of economic development, and the focus is on more abstract and less tangible ‘matters’ such as ‘the Russian world’ (Russkiy Mir) or ‘a special path’ devoid of a particular vector: it is much more difficult to ‘feel’ and assess their validity than if we were dealing with money, technologies, armies or the number of scientific discoveries. Open borders and free access to the Internet today make it impossible to do what the Soviet leaders or today’s regime in North Korea managed to – to deceive their citizens about the levels of advancement in ‘hostile’ countries and the well-being of their populations. However, it is impossible to gauge, for example, the ‘level of spirituality’ with the naked eye. Hence, it is easy to manipulate such abstract categories despite the globalization of the information space.

Despite the apparent similarity between Soviet and today’s Kremlin propaganda, there is a colossal difference between them which affects the end ‘consumer’ of the information. Propaganda in the days of the USSR had a ‘positive charge’ to it: a new bright future was ‘being built’, in accordance with the news reports of the time, five-year plans were ‘overfulfilled’ and, in general, ‘development’ went forth in leaps and bounds in contrast to ‘rotting’ capitalist countries. Western countries rather served as a backdrop for even further aggrandizement of artificially overstated successes of the Soviet Union.

Today’s approach differs in terms of mood as it bears a minus sign: we have not managed to build anything outstanding ourselves, and the West is to blame. And Russians are meant to praise the events which happened 70 years ago with patriotic pathos inflated around them, which eventually leads them to wrongly believe in the right of ‘the nation-the winner over fascism’ to decide the fate of neighboring countries. Setting to one side all the sonorous and secondary phraseologies, it turns out that Soviet propaganda imputed that people should live for the sake of ‘a bright future’ which was due to arrive at an undetermined future date whereas today’s propaganda espouses living in order to ‘wipe America’s eye’.

One has to realize that the negativistic rhetoric of the Kremlin’s mouthpieces accompanied by the orientation towards the past over the future does not pass by without having an effect on public mental ‘health’. Phobias (homophobia, liberalophobia and Americanophobia which tops the list) supported and stimulated by the media lead to a rise in intolerance and, subsequently, aggression in a society; a surge in which can be observed even now. Back in 2013, experts from the Institute of Psychology of the Russian Academy of Sciences published the results of their study on the assessment of changes in the typical psychological profile of a Russian citizen from 1981 to 2011. It turned out that Russians became three times more aggressive and rude over the course of twenty years and it was also noted that the media, among others, spark the trend for aggression.

However, a lot has changed since 2011, including the manner in which information is presented, which also differentiates the contemporary system of manipulation of public opinion from the Soviet one. In the days of the USSR, trained presenters read the news in orator-style voices using official and sometimes stilted language, whereas today Kisilev’s style is at the peak of popularity featuring typical jibes, threats, an aggressive manner of presenting information and over-the-top theatricality. And even though quite recently Kiselev himself was seen as an exceptional phenomenon (a kind of Zhirinovsky of the screen), now the majority of TV channel’s presenters and journalists copy his trademark aggressive ‘style’ which can be defined as ‘militant pseudo-patriotism’. Thus, the media (especially since the days of Maidan in Ukraine and the annexation of Crimea) have greatly accelerated their fomenting of aggressive moods. That’s why, compared to 1981, the psychological profile of Russians has changed even more dramatically than experts assumed based on the 2011 data.

The increase in aggressive moods inevitably leads to an increase in the number of crimes committed, which is confirmed by the official statistics of the Ministry of the Interior. Thus, in the period between January and July 2015, 1.3 million crimes were recorded in Russia, which is almost 5% more than in the same period of last year. Against the backdrop of the topic of ‘the fifth Jewish column’ actively developed in the media, anti-Semitism is raising its head while labeling the citizens dissenting Putin’s regime as ‘agents of the State Dept’ leads, on the one hand, to the perpetuation of the myth of ‘the paid-for’ oppositionists among society and the need to fight them (in the last year survey by the Levada Centre, 36% of Russians were in favor of the authorities’ battle against ‘Western agents’ and ‘the fifth column’). And, on the other hand, it leads to the fact that Russians critical of the authorities who are not engaged in political or media activity refrain from voicing their views for fear of stigma or being labelled a ‘traitor of the homeland’.

The fact that the current situation is not static and, in time, the atmosphere of intolerance created by the propaganda is most likely to grow in scope and depth should be borne in mind. The economic crisis is here to stay in Russia for the long term and its consequences are only now beginning to be fully felt, which will inevitably result in an increase in the levels of dissatisfaction with life and the intensification of depressive moods among society. These moods, mixed with aggression towards the otherwise-minded, West along with anything that may pose a threat to the regime, when stoked by the media, have the potential to turn into a wave of violence and social unrest. By a twist of fate, the regime itself, among others, may in the end become the victim of them.

The warriors of the invisible front

Yet another novelty introduced by the orchestrators of Russian propaganda are ‘Kremlin bots’ (or ‘trolls’) flooding both Russian and foreign websites. One of their offices is located in the Petersburg district of Olgino. Their activity is aimed at misinformation but, more generally, it negatively impacts on the psyche of those who are used to getting their information from the Internet. Firstly, the vocabulary and tone adopted by paid-for commentators is far more aggressive. They often make direct calls for extremism. Secondly, swarm attacks by ‘trolls’ result in the fact that the majority of liberal, or simply moderate web editions, opt to disable their comments sections altogether; depriving the online community of the opportunity to exchange real views. And on those websites where ‘comments’ still remain open, one anti-Putin statement is counteracted by a flurry of offerings in the spirit of Kisilev’s ‘militant pseudo-patriotism’. This results in the fact that those who fully or partially disagree with policies pursued by Putin start to experience a feeling of isolation which, in turn, prompts them to resort to the practice of self-censorship in a bid to avoid provoking the overly aggressive ‘majority’ and standing out from the crowd. It is obvious that ‘trolls’ have been created not in order to really prove something to somebody on the Internet, but in order to create the illusion of the existence of an active majority which supports anything and all the regime does both for the internal and external recipient. Thus, a situation arises, when a Russian critical of the current authorities is practically told in a straightforward manner: either you grin and bear and tacitly support (or dissent in silence) it, or leave the country taking your ‘wrong’ views with you. And a different message is sent to those who are passively ‘in favor’: it is not enough to be ‘in favor’, one should be openly and aggressively against those who are not supportive of the Kremlin. Following these behavior models can unfortunately lead to the emergence of mental disorders and an intensification of the persecution of the opposition. Thus, it turns out that methods of present-day Russian propaganda examined above are bound to lead to the even greater radicalization of Russian society in the nearest future.