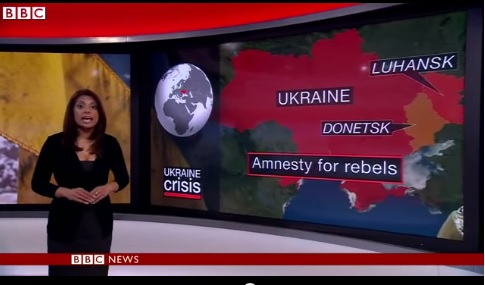 The West’s latest round of sanctions against Russia and the fragile truce between Moscow and Kiev fails to alter the fact that the Kremlin has already succeeded in achieving most of its aims in Ukraine. Crimea is an all-but-accepted lost cause, and territories in Eastern and Southern Ukraine are under serious pressure to follow suit.  But the US and the EU should realize that it was not solely militias in Eastern Ukraine or Russian weaponry that secured the upper hand for the Kremlin.  In its campaign in Ukraine, Russia’s propaganda and information warfare have been far more effective than military action in helping Moscow achieve its agenda while largely tying the West’s hands in its attempts to respond.

The significance of Moscow-spun propaganda needs to be recognized and should not be underestimated. Much of the point of view of that propaganda has insinuated itself into and been internalized by the Western media, complementing Russia’s military tactics in achieving Putin’s expansionist goals.  Since the start of the Kremlin’s campaign to take over Crimea in March, five myths successfully promulgated by the Russian propaganda machine have played a central role in allowing Putin to consolidate his gains in Ukraine.

The first myth, and the one that set the events in motion, was the narrative that depicts Crimea and Eastern Ukraine as essentially Russian. Moscow’s arguments promote the concept of a Kievan Rus, or a 9th century cradle of Slavic [Russian according to Moscow] civilization in the territory of Ukraine. Yet, whatever slim basis this notion might have in medieval history, in today’s reality, according to the 2001 census, out of Ukraine’s 24 regions, only the Donetsk and Luhansk regions had populations where Russian speakers totaled more than 50 percent.  And even this figure fails to distinguish the fact that in former Soviet countries, where for many years Russian was the administrative language, a Russian speaker is not necessarily an ethnic Russian. For instance, pre-conflict Crimea was 77 percent Russian speaking but only 58 percent ethnically Russian, with Ukrainians and Crimean Tatars making up the balance.

The second myth of Russian propaganda posits that since the Euromaidan revolution toppled the government in Kiev, Eastern Ukrainians have been calling for Russian protection from the new government. While this notion was widely disseminated and even routinely believed, the Gallup Organization conducted polls in Ukraine April 2014, which found that only 8 percent of the population in Eastern Ukraine responded ‘definitely yes’ to wanting protection by the Russian army. In contrast 52 percent responded ‘definitely no.’ Likewise, 11 percent responded ‘rather yes’ while 17 percent responded ‘rather no.’ These first two inventions – which can be summarized as Russia was only responding to Russians asking for protection from Russia – were used as the initial pretext for Russian military adventurism in Crimea and Eastern Ukraine.

The third myth of the Russian propaganda effort, the frequent reference to militias in Ukraine’s Donbas region as local “separatists,” is one that is highly relevant today and continues to obscure the facts on the ground in Ukraine.  It is an open secret that these “separatists” are largely composed of Russian special-forces, Russian militias of former (contract) soldiers, Cossack and Chechen militias, and local mercenaries. The ongoing use of the term “separatists” by the Western media reinforces the Kremlin’s construction of events, which denies Russian interference and characterizes the war as a conflict between Kiev and a group of local, homegrown rebels.

A fourth, particularly cynical myth broadcast by Russia – one that has been seen as transparent in the West – is the proposition that the Ukrainian government consists of “fascists” as the Russian media would have the people of Eastern Ukraine and the rest of the world believe. This portrayal of the government in Kiev enables Russia to propound the fifth and most insidious propaganda myth: that the Russian government and its proxies are “anti-fascists.” Recently Putin compared the struggle for Donetsk with the heroic anti-fascist struggle of the Russians during the siege of Leningrad in World War II.  The truth, however, is that present-day Russian “anti-fascism” is nothing more than a nationalist and xenophobic self-celebration. It has nothing to do with genuine anti-fascism, which is characterized by adherence to democratic principles, respect for international law, and the protection of human rights.
What present-day Russia calls “anti-fascism” is rather the expression of a jingoist, nationalist mood, which in fact comes close, very close indeed, to a modern variant of fascism itself.  It is, therefore, no coincidence and has been well documented that Putin’s friends in Europe can be found in particular in neo-fascist and extreme right parties.

It is important to debunk all these myths and in particular this final, most sinister myth of Russian “anti-fascism” and call Putin’s regime what it is:  ultranationalist, populist, nativist, and directly opposed to liberal democracy.  Or put another way: neo-fascist.

Ms. Grigas is a fellow at the McKinnon center for Global Affairs at Occidental College. Mr. Van Herpen is director of the Cicero Foundation.