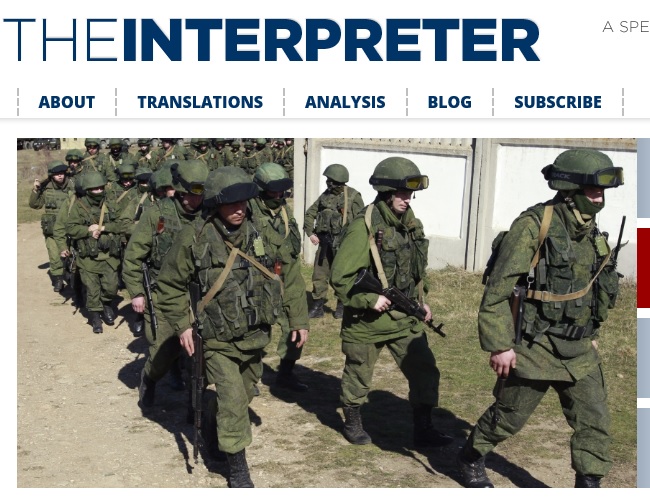 This is a Special Report on the Kremlin’s information war presented by The Interpreter, a project of the Institute of Modern Russia.

• The Kremlin exploits the idea of freedom of information to inject disinformation into society. The effect is not to persuade (as in classic public diplomacy) or earn credibility but to sow confusion via conspiracy theories and proliferate falsehoods.

• The Kremlin is increasing its “information war” budget. RT, which includes multilingual rolling news, a wire service and radio channels, has an estimated budget of over $300 million, set to increase by 41% to include German- and Frenchlanguage channels. There is increasing use of social media to spread disinformation and trolls to attack publications and personalities.

• Unlike in the Cold War, when Soviets largely supported leftist groups, a fluid approach to ideology now allows the Kremlin to simultaneously back far-left and far-right movements, greens, anti-globalists and financial elites. The aim is to exacerbate divides and create an echo chamber of Kremlin support.

• The Kremlin exploits the openness of liberal democracies to use the Orthodox Church and expatriate NGOs to further aggressive foreign policy goals.

• There is an attempt to co-opt parts of the expert community in the West via such bodies as the Valdai Forum, which critics accuse of swapping access for acquiescence. Other senior Western experts are given positions in Russian companies and become de facto communications representatives of the Kremlin.

• Financial PR firms and hired influencers help the Kremlin’s cause by arguing that “finance and politics should be kept separate.” But whereas the liberal idea of globalization sees money as politically neutral, with global commerce leading to peace and interdependence, the Kremlin uses the openness of global markets as an opportunity to employ money, commerce and energy as foreign policy weapons.

• The West’s acquiescence to sheltering corrupt Russian money demoralizes the Russian opposition while making the West more dependent on the Kremlin.

• The Kremlin is helping foster an anti-Western, authoritarian Internationale that is becoming ever more popular in Central Europe and throughout the world.

• The weaponization of information, culture and money is a vital part of the Kremlin’s hybrid, or non-linear, war, which combines the above elements with covert and small-scale military operations. The conflict in Ukraine saw non-linear war in action. Other rising authoritarian states will look to copy Moscow’s model of hybrid war—and the West has no institutional or analytical tools to deal with it.

• The Kremlin applies different approaches to different regions across the world, using local rivalries and resentments to divide and conquer.

• The Kremlin exploits systemic weak spots in the Western system, providing a sort of X-ray of the underbelly of liberal democracy.

• The Kremlin successfully erodes the integrity of investigative and political journalism, producing a lack of faith in traditional media.

• Offshore zones and opaque shell companies help sustain Kremlin corruption and aid its influence. For journalists, the threat of libel means few publications are ready to take on Kremlin-connected figures.

• Lack of transparency in funding and the blurring of distinctions between think tanks and lobbying helps the Kremlin push its agendas forward without due scrutiny.

The full version of this analysis you can read on the website of The Interpreter.