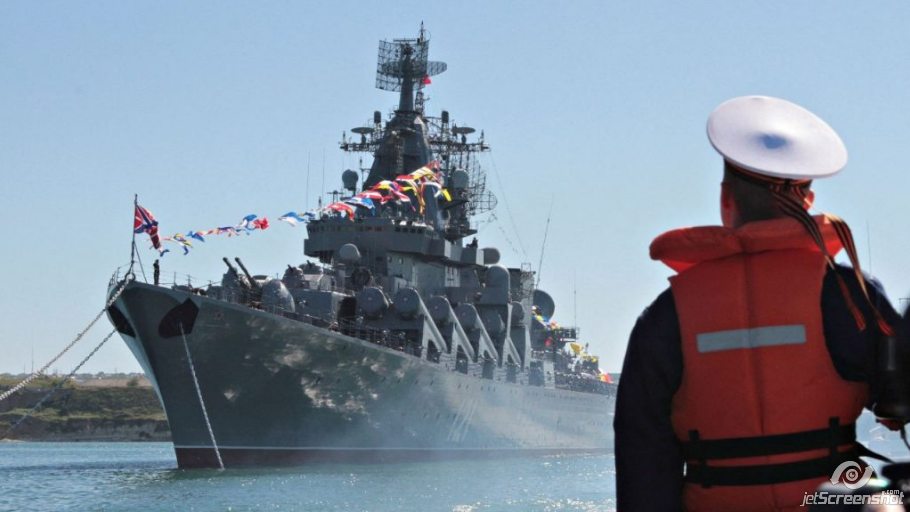 The US is to blame for everything in the topsy turvy world of Russian propaganda, except the things it’s actually involved in.

The truth holds little power in Vladimir Putin’s Russia. On May 9, the Kremlin engaged in a breast-beating display of military power far from the reality of twisted tanks and burned-out armored fighting vehicles on the plains of Eastern Ukraine. The serried ranks of marching troops do not — of course — involve the legions of the dead.

The purpose is supposedly to celebrate the Soviet victory over Nazi Germany and yet the other 14 republics are barely mentioned. And what is anyone to understand by the Putin-era slogan of “We can do it again”? To whom?

Clearly, to the Ukrainians who Putin once again stated had no legitimate national existence; but also to the United States, which Russian propaganda elevates to the position of the malign puppet master-in-chief. the ultimate evil. There is no depth to which the US will not sink in its desperate schemes to destroy Russia. Its leaders have an irrational hatred of Russia, a phobia, which is so strong that it cannot be contained.

Since the Soviet days, the United States has been continuously accused of everything from the creation of AIDS and the coronavirus, to organizing protests within Russia and its neighbors, election interference, and outright attacks, like its supposed sinking of the submarine, Kursk. When things go wrong for Russia, within or without, the US is immediately blamed. Months before Russia launched its assault on Ukraine, the Kremlin-directed media was awash with headlines like “Defense Ministry: NATO is preparing for a large-scale armed conflict with Russia.” There were so many that it is now clear that the Russian people were being primed for their eventual full-blown war against Ukraine. Weeks prior to the invasion, Russia conducted numerous false flag operations, in the Russian-occupied territories of Luhansk and Donetsk, only to blame the US and Ukraine.

And since this new invasion, Russia has issued baseless “warnings” of the US-prepared chemical attacks and dirty bomb attacks inside Ukraine, the dispatch of mercenaries, and threats of severe consequences should NATO and the US continue supplying Ukraine with lethal weapons.

All of which was breathtaking but predictable.

But then NBC News reported that the US had directly assisted the Ukrainian armed forces in targeting Russia’s Black Sea flagship, the cruiser Moskva, which was struck by anti-ship missiles on April 13. The vessel sank some hours later with an unknown number of casualties.

US officials told NBC that it had provided intelligence on the ship’s identity and location before the strike in response to a Ukrainian appeal for assistance. The Russian Ministry of Defense announced that the ship suffered a fire, causing ammunition to detonate.

This is really quite strange. Russian media has been issuing constant drumbeats of disinformation on US involvement in the war. Its hyperactive analysts have suggested that the reason Russia’s armed forces are having such a tough time is that they’re actually fighting NATO. How else to explain the extraordinary Ukrainian military successes?

So why hold back on the Moskva? Is the Kremlin in fact hesitant to have a direct confrontation with the United States?

Russian state news agencies, such as TASS and RIA Novosti, follow US headlines very closely, but did not report on the breaking news of US intelligence helping Ukrainian forces to sink the Moskva. Yet only the previous day, the agencies had relayed a New York Times report that US intelligence assisted in the battlefield deaths of a dozen Russian generals.

Only one outlet, Moskovsky Komsomolets, over a century old and known to have ties to Russia’s FSB security service, published a CNN headline confirming the US role in the sinking. The Kremlin issued a statement so vague that it failed even to mention the Moskva. Kremlin spokesman Dmitry Peskov responded to the reports on senior Russian officer casualties by saying dismissively: “Our military is well aware that the United States, Britain, and NATO as a whole are constantly transmitting intelligence and other parameters to the Ukrainian armed forces.” Moskovsky Komsomolets removed its Moskva report from its website, though the article can still be found on a Google search.

The Kremlin’s reticence can be explained in two ways. Firstly, Putin has projected an image of strength for two decades. Here is a man who takes his shirt off when riding horses, who is a skilled karate practitioner, and a ruthless ice hockey player. Caution is not his thing. So an admission that his Black Sea flagship was sunk with US involvement would beg the question from Russians — what are you going to do about it? The answer right now is, nothing much.

Secondly, the Kremlin continues to say that the special military operation is going according to plan. It would be hard, even for the most ardent regime loyalist, to make the case that the plan foresaw a 12,000-ton warship settled on the seabed.

Russia has always excelled at conducting operations and attacks against the West, where it enjoys plausible deniability. Despite endless, splenetic propaganda and lies about imminent attacks by Ukraine and the West, Putin is showing caution when dealing with actual events. His Western opponents should have a careful think about the implications of this.

Olga Lautman is the host of the Kremlin File podcast  and an analyst/researcher focusing on Russia, Ukraine, and Eastern Europe.