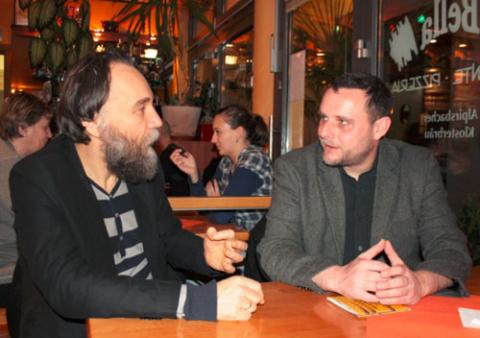 Manuel Ochsenreiter is not a household name either in the United States or in his native Germany. He’s the editor of “Zuerst! German News Magazine” whose promotional material says that it’s “committed only to the life and survival interests of the German people and the precious heritage of our European culture“, and describes other German media as being under the control of “foreign interests.” In a format familiar to readers of mainstream news magazines, Zuerst! promotes Neue Rechte and Völkisch ideas such as the preservation of “German ethnical (sic) identity”, burnishing the image of the Third Reich in popular culture and opposing what it regards as the humiliating legacy of denazification.

The current edition of Zuerst! features a story about “welfare immigrants” and another about “gypsy pickpockets”. Other articles focus on the evils of globalization and loss of ethnic identity. A piece combining art criticism with implications of corruption slams Berlin’s Holocaust memorial. (They also have a piece which implausibly claims that many Russians would like to return Kaliningrad to Germany, comparing this to the situation in Crimea.)  Zuerst!’s publisher is longtime far-right Dietmar Munier, a veteran of Germany’s far-right political scene and reportedly a friend to several Holocaust deniers.

Shortly after Zuerst! began publication in 2010,  workers for its distributor, Bauer Media,threatened to strike, refusing to handle a pro-Nazi magazine. Bauer, which is Germany’s largest magazine publisher and has a growing worldwide presence, washed its hands of Zuerst! after an embarrassing expose in Der Spiegel. (More here.) (At the same time Bauer broke its ties with several other far-right and pro-Nazi German publications, and with a producer of Nazi-themed pornography.)

RT has singled Manuel Ochsenreiter out as their primary on-air spokesman for the German point of view, featuring him on talk shows and extended interviews on the network scores of times over the past four years. While it may seem strange for RT to choose the editor of a neo-Nazi magazine to be their expert on German public opinion, in a way it makes perfect sense precisely because so few people know who he is. RT identifies him on air only as a German journalist. Moreover, judging by his on-air performance, he is very happy to say whatever it takes to keep his patrons at RT happy.

For example, on the March 17 edition of the RT talk show Cross Talk (entitled “Welcome Crimea!”), Ochsenreiter started by comparing the Crimea invasion to the reunification of Germany, then veered off-script to state that, contrary to virtually every other report on the subject, Tatars in Crimea who are not in the pay of the EU actually support secession from Ukraine. The program’s host interrupted this implausible report to ask a leading question about the freedom of the voting in the Crimea secession referendum. In reply to this, Ochsenreiter laughed as he reported that the voting did not take place “under the gun…there were no guns”. Then, as he stared somewhat forlornly at the camera, a fellow guest corrected this obvious distortion by arguing that the referendum could safely take place only under the protection of Russian guns – that in fact the guns were there to protect democracy from pro-Nazi Ukrainian nationalists.

Again at the prompting of the program’s host, Ochsenreiter turned his attention from the purported non-violence of Russia’s presence in Crimea, to parroting almost word for word the host’s statement that German taxpayers were being asked by the EU to pay Ukraine’s debts. You may think that such servile on-the-spot reproductions of a party line by an English-speaking alleged journalist are easy to come by, but you’d be wrong. For that reason alone, it’s perfectly understandable that RT would resort to airing the views of the editor of a neo-Nazi propaganda magazine.