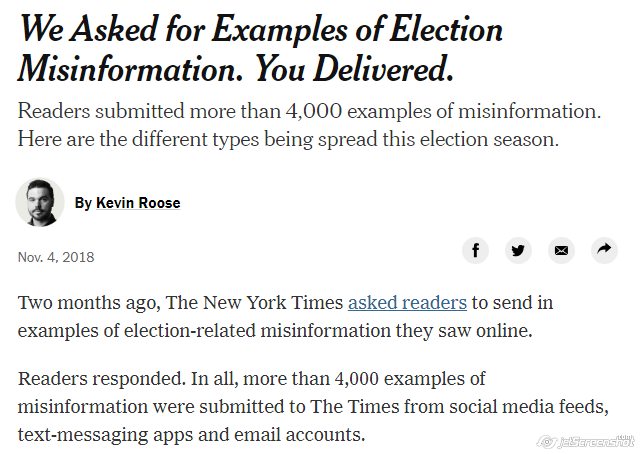 This election might have less misinformation than 2016’s race, but “Christine Blasey Ford — proudly posing with Soros” and “We’re making a Woman’s Vote Worth more by staying home” are still out there.

The New York Times’ Kevin Roose (and other reporters and editors) sifted through more than 4,000 examples of misinformation on social media, messaging apps, and emails submitted by readers over the past two months. “Times journalists are hoping to use your tips to advance our reporting. If you see a suspicious post or text, please take a screenshot and upload it with the form below,” Roose wrote in mid-September.

The submissions helped fuel the Times’ reporting (engagement work pioneered by ProPublica and others) and chronicle the types of misinformation spread around the internet. Heck, maybe it even helped readers think twice about that sketchy text message “BREAKING: Andrew Gillum may be under an ‘active criminal investigation.’”

The callout asked only about disinformation; the post about the responses, however, focused on misinformation. While we are glad to see no mention of f— news in either writeup, it would probably help the discussion to make the distinction between the two: disinformation being the intentional dissemination of false info to deceive, misinformation being false info spread possibly on accident when people really don’t realize it’s not true. This might be a chicken-and-an-egg scenario — when does disinformation turn into misinformation? Did the readers submit the bad posts after seeing it from the Russian Facebook pages or their friends who believed it and shared it? — but cheers for those academic terms starting to enter mainstream media more.

Yeah, I’ve been vacillating more than I’d like. The issue is that something can start as deliberate disinfo and then be shared by people who believe it, which makes it more like misinfo. Which do you use?

The top disinformation themes that New York Times readers sent in include:

See the reader-submitted screenshots (and the Times’ follow-up reporting here).