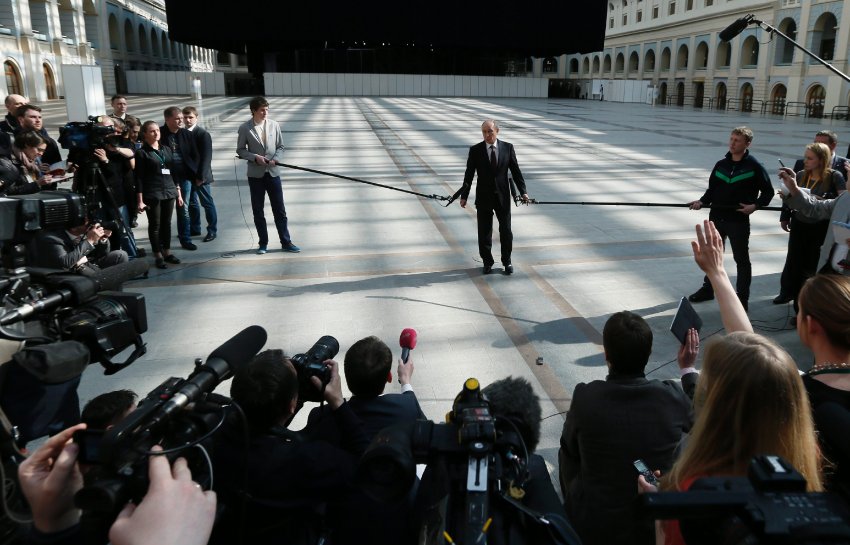 With the help of news services like RT and Ruptly, the Kremlin is seeking to reshape the way the world thinks about Russia. And it has been highly successful: Vladimir Putin has won the propaganda war over Ukraine and the West is divided.

Ivan Rodionov sits in his office at Berlin’s Postdamer Platz and seems to relish his role as the bad guy. He rails in almost accent-free German, with a quiet, but sharp voice, on the German media, which, he claims, have been walking in “lockstep” when it comes to their coverage of the Ukraine crisis. During recent appearances on two major German talk shows, Rodionov disputed allegations that Russian soldiers had infiltrated Crimea prior to the controversial referendum and its annexation by Russia. He says it’s the “radical right-wing views” of the Kiev government, and not Russia, that poses the threat. “Western politicians,” he says, “are either helping directly or are at least looking on.”

Rodionov defends President Vladimir Putin so vehemently that one could be forgiven for confusing him with a Kremlin spokesperson. But Rodionov views himself as a journalist. The 49-year-old is the head of the video news agency Ruptly, founded one year ago and financed by the Russian government. The eighth floor of the office building has a grand view of Germany’s house of parliament, the Reichstag. It’s a posh location and the Kremlin doesn’t seem to mind spending quite a bit of money to disseminate its view of the world from here. Around 110 people from Spain, Britain, Russia and Poland work day and night in the three-floor office space on videos that are then syndicated to the international media.

At first glance, it’s not obvious that Ruptly is actually Kremlin TV. In addition to Putin speeches, there are also numerous other video clips available in its archive, ranging from Pussy Riot to arrests of members of the Russian opposition. When it comes to eastern Ukraine, however, the agency offers almost exclusively videos that are favorable towards pro-Russian supporters of the “People’s Republic of Donetsk,” which was founded by separatists. You’ll also find right-wing radicals like Britain’s Nick Griffin or German far-right extremist Olaf Rose, an ideologist with the neo-Nazi National Democratic Party (NPD), stirring up hatred towards the European Union and its Ukraine policies.

Rodionov says that, since its founding, Ruptly has attracted 14 subscribers and over 200 customers, including German broadcasters “both public and private.” Subsidies from Moscow enable Ruptly to offer professionally produced videos at prices cheaper than those of the private competition.

The battle over Ukraine is being fought with diverse means — with harsh words and soft diplomacy, with natural gas, weapons and intelligence services. But perhaps the most important instruments being deployed by Moscow are the Internet, newspapers and television, including allegedly neutral journalists and pundits dispatched around the world to propagate the Kremlin position.

“We’re in the middle of a relentless propaganda war,” says Andrew Weiss, vice president of studies at the Carnegie Endowment for International Peace, an influential Washington think tank. Weiss describes this propaganda as a crucial tool used by Russia to conduct its foreign policy.

Moscow is looking beyond the short-term, seeking to influence opinion in the long-run to create “an alternative discourse in Western countries as well,” says Margarita Simonyan, editor in chief of Kremlin foreign broadcaster RT, formerly known as Russia Today, which owns Ruptly.

The Kremlin invests around €100 million ($136 million) a year in Russian media abroad in order to influence public opinion in the West. This effort also helps explain why Putin addressed Germans directly in his speech on the annexation of Crimea. Noting the Kremlin had supported Germany’s reunification process, he called on Germans to back Russia’s reunification with Crimea. Putin’s popularity in Germany has declined steadily over the years, but his worldview remains quite popular.

Sources within the Kremlin express satisfaction these days when talking about Moscow’s information policies. “We may have won the war in Georgia in 2008, but we lost the propaganda battle against America and the West by a mile,” says one. “Thanks to RT and the Internet, though, we are now closing the gap.”

Whereas Ruptly is seeking to establish itself as an alternative to Reuters and the Associated Press in providing video footage, RT has already successfully established itself in the nine years since its creation, recently surpassing even CNN when it comes to clips viewed on YouTube. With close to 1.2 billion views, the BBC is the only media outlet ahead of RT. In Britain, RT has more viewers than the Europe-wide news station Euronews and in some major US cities, the channel is the most-viewed of all foreign broadcasters. RT’s 2,500 employees report and broadcast in Russian, English, Spanish and Arabic with German to be added soon.

The triumphant advance of Putin’s broadcaster began in a former factory in northeast Moscow. Founding RT editor Simonyan was just 25 at the time Putin appointed her in 2005. Her assignment from the Russian president: to “break the monopoly of the Anglo-Saxon mass media.”

It’s a mandate she has been pursuing successfully ever since. “There’s large demand for media that doesn’t just parrot the uniform pulp from the Western press,” says Simonyan. “Even in Western countries.” RT gives pro-Russian representatives from Eastern Ukraine far more air time than supporters of the government in Kiev, and not even Simonyan disputes this fact. “We’re something along the lines of Russia’s Information Defense Ministry,” her co-workers say, not without pride.

Ruptly and RT are only the most visible instruments being used by the Kremlin. Other propaganda methods being exploited can be less obvious.

For example, when German talk shows invite Russian journalists to speak about the Ukraine crisis, they are almost always pundits who could have been taken directly out of the Kremlin propaganda department. Programmers, of course, like to book these guests because they generate heated and provocative discussion. But it’s also a function of the fact that experts critical of the government either don’t want to talk or are kept from doing so. Take the example of Sergej Sumlenny, who served until January as the German correspondent for the Russian business magazine Expert. Early on, he appeared often on German talk shows, intelligently and pointedly criticizing Putin’s policies. He has since been driven out at the magazine.

In his stead, the Russian perspective is now represented on German talk shows by people like Anna Rose, who is generally introduced as a correspondent for Rossiyskaya Gazeta, or Russian Gazette. The name sounds innocuous enough, but eyebrows should be raised immediately when this “serious” Russian journalist begins claiming that the Ukrainian army could be shooting “at women and children” and that Russian soldiers need to provide them with protection. Her positions suddenly become more understandable with the knowledge that Rossiyskaya Gazeta is the Russian government’s official newspaper.

Those who read comments posted under articles about Ukraine on news websites will have noticed in recent months that they have been filled with missives that always seem to follow the same line of argumentation. Moscow’s independent business daily Vedomosti reported recently that, since the start of the Ukraine crisis, the presidential administration in Moscow has been testing how public opinion in the United States and Europe can be manipulated using the Internet and social networks. The paper reported that most of the professional comment posters active in Germany are Russian immigrants who submit their pro-Russian comments on Facebook and on news websites.

In addition, journalists and editors at German websites and publications report receiving letters and emails offering “explosive information about the Ukraine crisis” on an almost daily basis. The “sources” often mention they have evidence about the right-wing nature of the Kiev government that they would like to supply to journalists. The letters are written in German, but appear to include direct translations of Russian phrases. They would seem to have been written by mother-tongue Russian speakers.

Other forms of propaganda have also been deployed in recent months. For example, there have been frequent incidences of intercepted conversations of Western diplomats or Kiev politicians getting published in ways that serve Russia’s interests. From the “Fuck the EU” statement by Victoria Nuland, the top US diplomat to Europe, right up to statements made by Estonia’s foreign minister that were apparently supposed to prove who was responsible for the deaths of protesters on Maidan Square. The Russian media also seemed to take pleasure in reporting in mid-April that CIA head John Brennan had traveled to Kiev.

Part 2 – ‘The West Has Never Gotten over Putin’s Return’.

Translated from the German by Daryl Lindsey.