When the aim is to discredit the opponent as a hypocritical liar, the denigrator faces a problem: where to get the evidence from to support the blackmailing efforts?  The producers of pro-Kremlin disinformation have several answers that we saw in action this week.

First, do not underestimate the effect of the almost endless circulation and reuse of a false online image. A photo showing Hillary Clinton shaking hands with the founder of al-Qaeda Osama bin Laden has been circulating for ten years on the internet since it was first created for a Photoshop contest held by the website FreakingNews.

Last year, the photo was recycled by pro-Kremlin Twitter accounts, and at the end of October the spokesperson of Russian Foreign Ministry – despite the fact that the image had been shown to be fake many times before – referred to “fantastic, mind-boggling photographs of how Bin Laden was hosted in the White House” to explain how the lobbying culture works in the US.  Well, the original photo documented Mrs Clinton meeting musician Shubhashish Mukherjee. 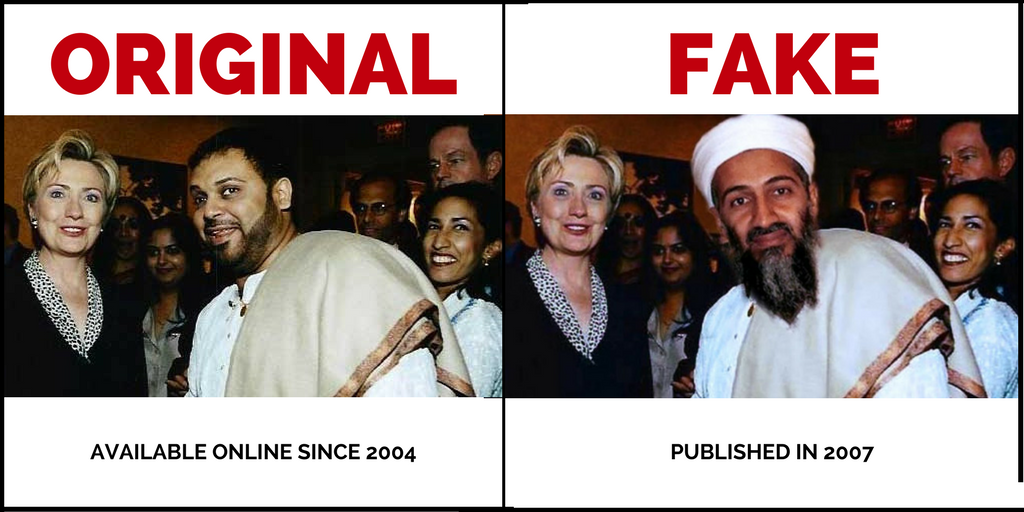 To actually create false evidence about the target’s opinions is more time consuming. Then, a fake Facebook profile is an easy option. This week, we heard that a Czech Parliamentarian would prefer to see five million Muslim migrants in the Czech Republic than five million voters for the Czech president. But the statement was made from a fake Facebook profile disguising itself as belonging to the MP in question.

A more challenging disinformation tactic is to write a false letter and spread it. In October, a fake letter allegedly written by the High Representative of the European Union for Foreign Affairs and Security Policy and addressed to the Secretary of State of European affairs of the Ministry of Foreign Affairs of Poland appeared. It was first published on Reddit in English and quickly spread in Russian language websites with headlines like “Mogherini allowed human rights to be violated in Ukraine” and on social media claiming “Mogherini openly supports the Nazis” It did not spread to the established media. See the debunk here.

This week we also saw official claims that it was Finland that wants Russia to join the European Centre of Excellence for Countering Hybrid Threats. No such proposal was ever made, and in fact participation in the centre is open only to EU Member States and Nato Allies – and the centre counters hybrid threats coming from Russia, among other actors.

Biological weapons here, there, and everywhere

One of the key themes of the past two weeks of disinformation was biological weapons. We heard that the US is collecting biological material in Russia to create a biological weapon of the next generation, which will specifically act on Russians. The shortcoming in this conspiracy theory is that both international and Russian experts stated that it is not possible to create such a weapon.

A similar narrative about biological weapons has been spread particularly regarding Georgia, Armenia, and Ukraine, for years. Besides Russia, it was now time for Georgia again. The conspiracies stated that both deadly pathogens and insects are being planted by the West in Georgia.

And just to cheer you up for the conclusion: We can tell you that the British government is not, in fact, planning to replace the term “pregnant women” with “pregnant people”!