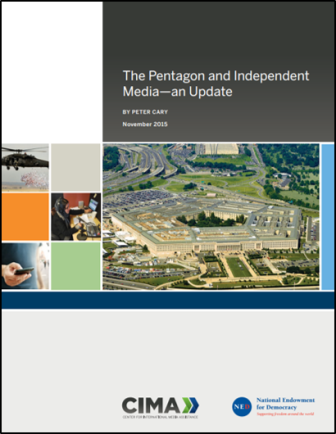 The U.S. Defense Department has long had an uneasy relationship with independent media. On the one hand, it needs the trusted voice of media to portray U.S. military activities in a positive light, both to maintain the support of citizens at home and to help fight its battles abroad. And to the extent that U.S. military intervention serves as a lever to encourage and create democracies, the support of free and independent media in those countries should be part of the plan. On the other hand, an unfettered media may be critical of the U.S. military and its allies, making its operations more difficult, losing it support at home or overseas, and even giving comfort to the enemy.

Such tensions came into sharp focus during the heat of the U.S. military’s participation in the wars in Iraq and Afghanistan when the U.S. military felt the need to use media to shape the battlefield. While the U.S. State Department and USAID, as well as European governments and NGOs, were working to create free and independent media outlets in these countries, the U.S. military’s information operations at times were at odds with their efforts.

A report issued by the Center for International Media Assistance in 2010, The Pentagon, Information Operations, and International Media Development, covered in great detail information operations activities of the Department of Defense (DoD) that caused tensions and difficulties for independent media and its developers. The activities included creating “good news” stories under fictitious bylines and placing them in media in Iraq; paying handsome sums to fledgling radio stations in Afghanistan to run military messaging, in some cases eroding their credibility; creating eight news and information websites targeting global conflict regions, an action thought by some to have veered way too far into the realm of public diplomacy, the province of the State Department or the Broadcasting Board of Governors. These and other activities occurred while—and perhaps because—the information operations apparatus at DoD was becoming an octopus with tentacles in a dozen agencies, with no one person in charge, and a budget that was nearly impossible to track and parse.

But since that report was issued in 2010 a lot has changed. Information operations activity in the DoD has been reined in, its structure rationalized. The eight global news and information websites, which seemed too much like public diplomacy, have been taken down. And incidents of working at cross purposes have been significantly reduced in Afghanistan and Iraq, partly because of the diminished U.S. military presence there and a decrease in warfighting activities, and partly because the media in these countries are less fragile than before. (It should also be noted that the hot wars in Iraq and Afghanistan were somewhat unique in that battles were being fought in the same places where NGOs were trying to build civil society, making military-NGO conflicts likely, if not inevitable.) It is also likely that the Pentagon paid attention to criticism generated by various media-related blunders and took corrective action.

Yet with the hot wars behind it, at least for the moment, new media challenges for the DoD have emerged. One has been divining how to best use the Internet and social media to combat enemies like al-Qaeda, the Taliban, and the Islamic State (IS or ISIS) in cyberspace. Another has been deciding how to incorporate social media into the personal and professional lives of soldiers and sailors.

Concerns by those in the media development business have shifted also. Gone are the days of complaints about information operations and psychological operations (PSYOPS) undermining media development being pursued by USAID and its contractors. But those have been replaced by broader concerns that the U.S government overall may now be too focused on counter-messaging at the expense of independent media development. “We are concerned that there is an increasing shift away from supporting genuinely independent media towards what might be termed counter-propaganda and promoting counter narratives,” says James Deane, director of policy and learning at BBC Media Action.

Leon Morse, deputy director of media development at IREX, for instance, notes that while working on a project in Syria he saw U.S. efforts directed not so much at creation or support of independent media as support for existing media outlets, mainly radio stations that could be counted on for their opposition to the Assad regime. “Parallel to the military conflict has been an intense media war being waged by the different sides in the conflict,” states a white paper by the Global Forum for Media Development. The outlets on both sides do not pursue “the essential need for Syrian citizens to have access to accurate, independent and professional news and information,” the report says.

Morse says the State Department, starting in 2012, provided direct funding to a number of Syrian media groups, but the funding was short term and was not really for media development. The stations supported—they were given stipends of perhaps five, ten, or fifteen thousand dollars—were ones that were either “opposition or opposition-leaning,” Morse says. In their day-to-day news coverage they were reasonably independent, Morse says but asks, “Were they critical of the U.S. or the West in the Syrian effort?” In his view, what the State Department backed in Syria shows a “lack of understanding of what a good fourth estate can accomplish.”

Mark Whitehouse, who was an official at IREX during the period Morse was discussing (he is now an independent media consultant) shares Morse’s concerns. He says he understood there were ongoing discussions at the State Department about the best approach in Syria: whether to do social media counter-messaging, whether to do more traditional media development, or whether to fund the media efforts of the opposition—or not. In the media development community, he says, “the general consensus is that the most effective approach is for Syrians to talk to Syrians—for moderate Syrian journalists and citizen-journalists to have a voice. That, in the long run, is the most effective strategy to counter extremism.”

Similar concerns are voiced by Deane, of BBC Media Action. He says there is a sense, as the United States engages in information warfare from Ukraine to Iraq to Syria, that it has shifted its focus “away from supporting genuinely independent media towards what might be termed counter-propaganda and promoting counter narratives.” The source of this effort, he offers, is not necessarily military and likely includes diplomatic and development considerations. In Iraq, it can be seen as support to the Abadi government to get its message out. All this, he says, may fall under the rubric of counter-terrorism and may not actually undermine local media but it is not media development. “We would argue that continuing to invest in people having access to genuinely independent, balanced news and platforms for public debate is a better response to this situation than investing purely in what some would call counter-propaganda. I think that’s an argument that is still to be won.” Whitehouse’s assessment is a bit direr: “The worry in the media development community is that media development is losing out and that counter-propaganda will be winning,” he said.

Morse voices one other broader concern—that a country’s human rights stance or record could diminish in importance versus its position as an ally in the war against Islamic terrorism. He cites Ethiopia as an example of a country that had passed laws that made it nearly impossible for its NGOs to receive outside funding. Yet Ethiopia provides a base for U.S. drones that overfly Somalia, so it can push back against criticism from the State Department and USAID over its human rights record. In Morse’s view, “the war on terror has really undercut our ability to leverage human rights-type work, including media freedom.

Excerpted and used with permission from The Pentagon and Independent Media—an Update, published by the Center for International Media Assistance in November 2015. Peter Cary is a consultant based outside of Washington, D.C. who specializes in writing, editing, and investigative projects. He is a former managing editor, investigative editor, and Pentagon reporter at U.S. News & World Report magazine.