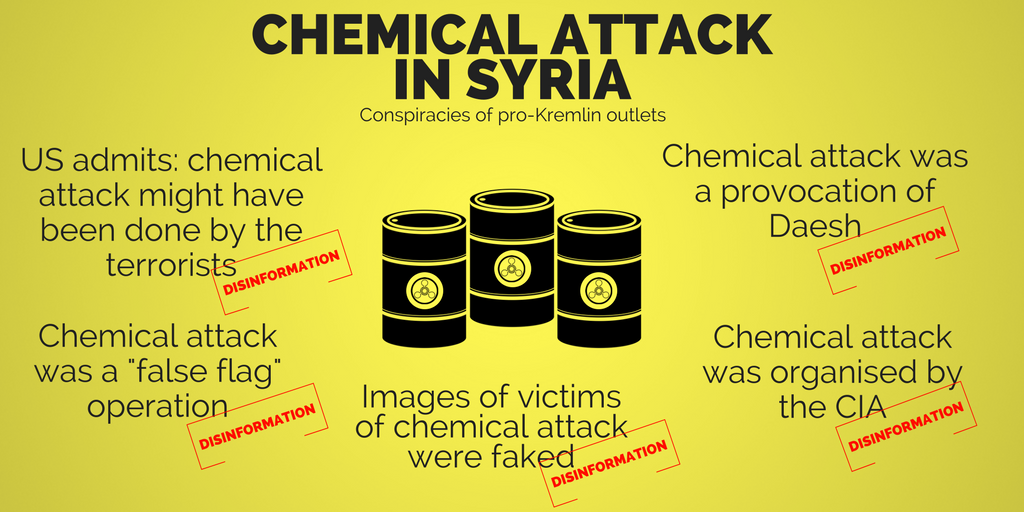 On Thursday, the UN-OPCW Joint Investigative Mechanism (JIM) is about to release a report on who was responsible for a chemical attack on 4 April on the town of Khan Sheikhoun in Syria. Predictably we saw this week how the pro-Kremlin disinformation machine prepared for the date of publication with efforts to sow mistrust in the investigation and confuse the public about this tragedy.

The most recent strategy was to imply that the US has admitted that the chemical attack might have been committed by terrorists, and hence the US missile strike on Shayrat Airbase was a waste of money. The US has not stated any such thing.

Going back to the attack in April, the pro-Kremlin disinformation approach then was to spread contradictory reports: that the attack happened five hours later than it actually occurred, that the Syrian army had hit stockpiles of terrorists’ chemical weapons, that the attack was a false-flag operation, that it was a provocation by Daesh, that the images of the victims were faked, or that the attack had been organised by the CIA and the Pentagon. This is a well-used strategy. For debunks see our detailed report on the topic. And see how the same disinformation techniques have been used in the shooting down of MH17 and the attack on the humanitarian convoy in Aleppo.

Another popular disinformation strategy has been to discredit other actors in Syria. The method is to repeatedly and constantly accuse the US of creating Daesh and supporting it in Syria. This false claim was again expressed this week on Russian Channel One.

Historical revisionism is another perennial favourite of the pro-Kremlin disinformation campaign. And it was in active use this week. So forget about the Age of Enlightenment or the industrial revolution: we heard instead that it was the USSR that forced the West to form a middle class, overcome segregation and develop education and human rights.

Life in Tsarist Russia was apparently more pleasant than in the European countries and living standards higher, so there would have been no need for the February revolution that was “inspired from outside”. The latter disinformation travelled from an article published by a nationalistic Russian newspaper in 2013 to a Georgian newspaper.  Only Ukraine, in the minds of the disinformers, is still as devastated now as it was in the 17th century. 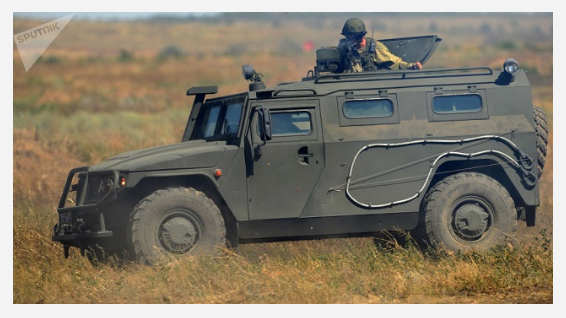 Modern Russia was also portrayed as a superior military trading partner for NATO countries. But the claim that Slovakia plans to buy the Russian armoured vehicle Tigr on a regular basis was quickly debunked by the Ministry of Interior and Ministry of Defence of Slovakia.

The worst crimes against humanity exploited

A third convenient method for pro-Kremlin disinformation tacticians is to pick some of the worst crimes against humanity, place them in a modern context, and accuse the opponent of these very crimes. From the disinformation distributor’s point of view, one of the advantages of this technique is that it serves as a way to normalise viewing your counterpart as an enemy.

This week, we heard that the West is preparing a “final solution” for destroying Russia, that this is why Russia is to be turned into a “symbol of absolute Evil” and that the West is “dehumanising” Russia in the same way the Nazis were dehumanising the Jews. If you want to vaccinate yourself against this particularly offensive form of disinformation, take a look at the track record of past efforts to further cooperation between the EU, Nato, and Russia.

We also learned that a massacre similar to Srebrenica might be repeated in Ukraine, if the border of separatist-controlled regions of eastern Ukraine with Russia is closed.  According to the International Criminal Tribunal for the Former Yugoslavia, the killings at Srebrenica amounted to genocide.

There is absolutely no evidence of a threat of genocide in Ukraine. But, according to our monitoring, disinformation practitioners have claimed that there is – on dozens of occasions during the last two years.