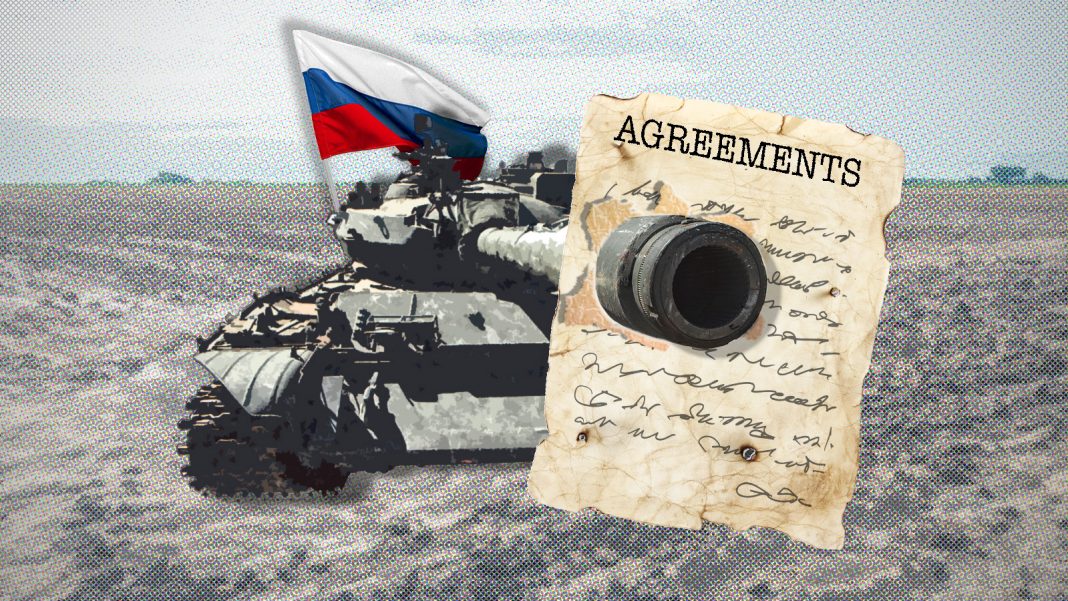 There is no crisis in Ukraine, but a naked Russian attempt to overthrow structures that uphold peace in Europe.

The ultimatums presented back in December 2021 in the disguise of so-called treaties with the US and with NATO, and the diplomatic messages that have emanated from Moscow since, make clear that the Kremlin is insincere in its search for a diplomatic solution to this crisis of its own making.

As Russia continues to be in violation of international law and treaties and has a military foothold within the internationally recognised borders of Georgia, Ukraine, and Moldova, it seeks to further expand its sphere of influence back into the heart of Europe.

In addition to Ukraine and Georgia, the Kremlin seeks to limit the sovereignty and freedom of decision within its neighbourhood, including in EU member states such as Sweden and Finland, and alliance members, such as the Baltic countries.

The Kremlin’s imperial appetite reaches even further with demands for NATO retroactively to nullify the wishes of tens of millions of EU citizens, allegedly orphaned by the departing Soviet occupation forces, who decided to support their nations to apply and join the alliance after 1997.

Turn up the volume of disinformation

To support this imperial appetite, and to serve the legacy-seeking masters in the Kremlin, pro-Kremlin outlets keep firing a continuous barrage of disinformation, which aims to confuse, deceive, and mislead both internal and external audiences.

Pro-Kremlin disinformation paints a sad picture of a military Goliath, and the largest country in the world, being afraid of a much smaller neighbour, Ukraine, which is mainly concerned with its survival, national integrity, and continued democratic development. A Western military alliance dedicated to the collective defence of its members, NATO, is depicted in pro-Kremlin propaganda as an aggressive, mortal threat planning to attack Russia at any point, which it clearly is not.

In addition to inventing external enemies, domestic voices of Memorial and other organisations that are upholding Russian society’s connection with its past are silenced and violently suppressed, including those of the democratic opposition.

Denying the right to exist

The US is claimed by the Russian leadership and pro-Kremlin outlets to be the villain, masterminding and controlling all of Europe and now allegedly pushing Ukraine into war with Russia. We are also told that Ukraine is an artificial state, not a viable entity outside the greater Russian sphere.

Such disinformation messages are mind-numbingly repetitive, as pro-Kremlin outlets made the same groundless claims in 2015, 2016, 2017, 2018, 2019, 2020… And yet, President Putin signed a summer 2021 article which argued at length that, essentially, the entire history of Ukraine, Ukrainian culture, and traditions are Russian. Right up to the development of the economy and Soviet Ukraine.

Simply put, according to the Kremlin all good comes from Moscow. Kyiv and the territory known as Ukraine was and should be an integral part of Greater Russia. The idea of an independent Ukraine in such narratives is portrayed the sick brainchild of Poles or Lithuanian knights, or their imperialist descendants. In these stories, Ukrainians are portrayed as misled by corrupt leaders, who are just puppets of Washington and Brussels organising orange revolutions and forced to comply with instructions from the Western powers.

Whataboutism about spheres of influence: Cuba and Ukraine

Another deliberate misrepresentation of history is found in the Cuban missile case.

The Cuba crisis is a frequent trope of whataboutism in defence of spheres of influence in the pro-Kremlin ecosystem of commentators. Summarised, the logic goes: Ukraine belongs in the Russian sphere of influence just like Cuba belongs in the US’s since the US would not accept Cuba becoming a member of the Warsaw Pact.

However, a closer examination reveals more interesting details than the superficial whataboutism suggests. The US accepted a system in Cuba based on a communist ideology directly at odds with its own, capitalist system. The Castro regime went on spreading the idea of socialist revolution across Latin America and beyond, as far as Ethiopia and Angola, without Havana being invaded. Foreign troops, Soviet soldiers, remained on the island.

The whataboutism about Cuba in the Warsaw Pact also suggests another false presumption: that the Warsaw Pact was something countries voluntarily applied for and where established members decided whether to accept new allies. Whereas in reality, the Warsaw Pact was a blunt instrument to secure Moscow’s stationing of Soviet occupation troops and politically control the states where they were deployed.

All this is diametrically opposed to the Western alliance, where sovereign states decide themselves to apply, or not, to become an alliance member, and whether or not to host alliance troops and assets.

See through the fog of disinformation

At this time, maybe more than ever, it is of outmost importance to be able to see through the fog of pro-Kremlin disinformation aimed at dividing the Western community and at deceiving the Western citizenry and decision-makers alike.

There is no crisis in Ukraine, but a naked attempt by Russia to use force to violate a security architecture that has secured peace and human rights in Europe during the past decades.

A successful and democratic Ukraine serves as an inspiration for citizens in countries such as Belarus and Russia, suggesting that change is possible also for them. An inspired and empowered citizenry led by an example from a successful neighbouring country is a mortal threat to aging autocrats.

Nato Salesman Of The Year Is Surprised By His Own Efficiency