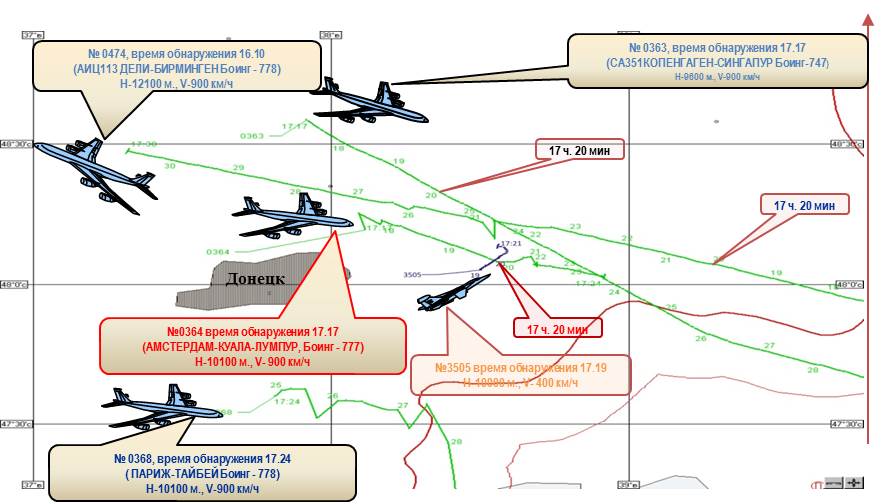 On July 21st 2014 the Russian Defence Ministry presented their evidence relating to the downing of Flight MH17 on July 17th 2014. Bellingcat has previously examined the claims made in this press conference in great detail, demonstrating how all the major claims made in the press conference were false, from claims about satellite imagery to claims about the movements of Buk missile launchers.

Today, the Russian Defence Ministry produced fresh radar data, supposedly previously misplaced, that showed the situation above Ukraine on July 17th 2014. In this presentation MH17 was identified and tracked from 13:04 onwards:

On July 21st 2014 the Russian Defence Ministry produced the following graphic, claiming the following: “Besides it, Russian system of air control detected the Ukrainian Air Force aircraft, purposed Su-25, moving upwards toward to the Malaysian Boeing-777. The distance between aircrafts was 3-5 kilometers.” They would also go on to claim that shortly after MH17 began to break up an object appeared on radar that they identified as an aircraft close to MH17.

In today’s press conference the story had changed completely. No longer was the Russian Defence Ministry talking about SU-25s, but now there was in fact no other aircraft, or any other object close to MH17. Now we have the Russian Defence Ministry themselves confirming Bellingcat’s earlier work that demonstrated they had produced false evidence at their July 21st 2014 MH17 press conference.

In addition to this, during today’s press conference the radar data showed the flight path of MH17 in the time before it was shot down: This flight path clearly contradicts the Russian Defence Ministry’s July 21st 2014 claims, debunked by Bellingcat and others, that MH17 had made a significant course change shortly before being shot down: