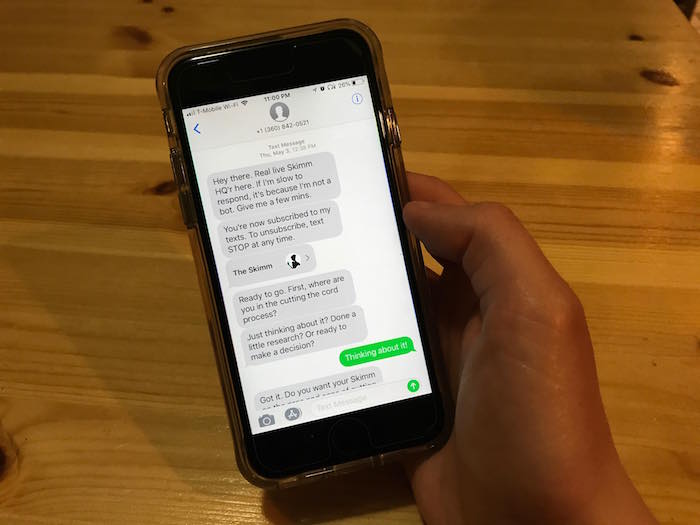 “People are always on their phones, but this isn’t ‘Let’s just start shooting them info over text.’ When you integrate into somebody’s routine in an intimate way, it has to feel right for the platform.”

If you’re thinking about cutting the cord on a cable TV subscription, would you Google the pros and cons? Post on Facebook? Call your parents? …Text The Skimm? If you’re one of their 7 million newsletter subscribers, you just might. On Wednesday, The Skimm pulled the curtain off a 1:1, Q&A texting service — no bots, just humans for now — to help its paid app subscribers contextualize the news of the day in their own lives.

“Our product strategy is based on finding questions that our audience has throughout their day, throughout their week, throughout their lives that The Skimm can help answer in a relatable tone — and marrying that with things they’re doing on their phones and in their routines,” Dheerja Kaur, The Skimm’s head of product, said.

But the team didn’t want to just send out The Daily Skimm newsletter in SMS form, either.

“People are always on their phones, but this isn’t ‘Let’s just start shooting them info over text,’” she explained. “When you integrate into somebody’s routine in an intimate way, it has to feel right for the platform.”

To match the personal nature of texting, Kaur and the product team wanted to create a contextualized sense of the week’s news, throwing in an extra layer of “how does this apply to me?” In the tests I tried, I could debate the pros and cons of starting or ending a cable TV subscription, or brainstorm ways to ask for a raise, though sometimes there was a lag between our exchanges (around 15 or 20 minutes), since I was texting with a human and not a bot. The Skimm’s voice is fairly well-refined after six years of daily takes on headlines, but Kaur believes that text interaction is a sacred space that bots just aren’t good enough for yet.

The technology is just not there to actually have a conversation with somebody,” she said. “[Bots] are good for a bare-bones experience and for pushing content at someone. We went straight to this human interaction because we felt the value that comes from having a 1:1 conversation is actually helping them get to a point where they can make a decision.”

How do they handle all that human interaction, though? For the first test, immediately after coming up with the idea, Kaur said the team huddled to research the topic (pros and cons of the new iPhone options) and communicate with users. They had spontaneously decided to send out a push notification to their app users, and “within five minutes we had this influx of incredible conversations,” Kaur said.

Now the weekly texting sessions are a bit more structured. The team picks a newsworthy topic (like the tax bill earlier this spring) and sets up a window of time when they will be at their computers and prepared for the questions, so there’s a clear start and end to the experience. The existing editorial team, about eight to ten people on rotation, takes the lead in responding. (“It’s not like we’re going to hire 200 people to run a hotline,” Kaur said.) They plan to gradually introduce a thin layer of automation to go through the initial screening of a text interaction, like what kind of phone the texter has and if they’re eligible for an upgrade, to use the previous example. Kaur guesses around 15 to 20 percent of the interaction will be automated in the service’s next evolution, but only as a more efficient, straight shot to the human element. At launch — aka now — the service is 100 percent human. This texting service is only for people who pay to subscribe to The Skimm’s app ($2.99/month, or $29.99/year). The app subscription also includes the Skimm Ahead calendar and the audio deep-dive Skimm Notes. (Kaur wouldn’t tell me how many paying subscribers the app has, beyond saying, “We’re a top-three-grossing news app.”).

Text The Skimm joins the app and a number of additional products The Skimm has launched over the past few months. In the fall, the 72-person company kicked off several video series on Facebook Watch, from political interviews to an entrepreneurship competition (though some have trickled off for now — other publishers have slowed their Facebook Watch content as Facebook subsidies are wrapping up). Skimm Notes was introduced to the app then too, pushing convenience to convert more newsletter subscribers to paid-app subscribers.

“The whole bundle is creating these services that make it easier to live smarter,” Kaur said. “The newsletter is really the gateway and the subscription is building out this set of services with the calendar, audio, and messaging.”

The Skimm is using Purple, the messaging startup that has swung between SMS and Facebook Messenger and then left it behind for helping journalists monetize their following through SMS. Text the Skimm is SMS only, even though the Skimm’s app could suffice as a messaging platform (not unlike the New York Times’ pivot to its app from SMS). Kaur isn’t fazed: “If we try to make it app-only, it defeats the whole purpose,” she said. “So much of [this product] is about being in the routine of texting.”

As the product moves out of testing, The Skimm plans to introducing some breaking news topics; one example might be learning about Facebook privacy settings in light of the Cambridge Analytica scandal. The team is also looking ahead to its 2018 midterms mobilization campaign; part of its recently closed, $12 million Series C funding round will go toward that. (The Skimm’s 2016 general election effort helped register more than 110,000 U.S. voters.)

SMS is cute, but does it really work for news organizations?

— With its new Olympics texting experiment, the Times is saying goodbye to SMS, hello to personalization: “What we’ve created is a bot-like exchange, but in the voice and tone of a person.”

— In Chicago, two news orgs are using texting and live events to widen the reach of their reporting on lead: “We’re trying to empower folks to make their own decisions, and that requires that we get them the right information.”

— BuzzFeed News’ podcast cohost, Jojo the bot, wants to help listeners follow along without friction: “One of our goals has been to talk about the news in a way that invites our audience into the news cycle. We’re trying to make it a little bit easier for people to be engaged.”