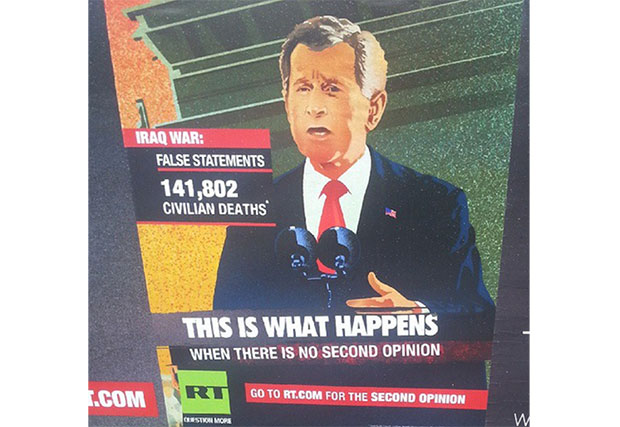 There’s a poster near my house in London, writes Padraig Reidy for www.indexoncensorship.org. It shows a poorly illustrated George W. Bush, aboard the USS Abraham Lincoln early in the Iraq war, with the now infamous “Mission Accomplished” banner behind him. To his side, the tally of dead in the Iraq War (at least according to Iraq Body Count). Underneath is emblazoned the slogan: “This is what happens when there is no second opinion.” It is an advert for Russian propaganda channel RT (formerly Russia Today). It’s a slightly muddled poster, but the signal is clear: did you feel lied to about the Iraq war? Watch RT.

Curiously, RT, which launched a UK channel on 30 October, seems to believe the poster doesn’t exist. A “report” on the RT website, dated 9 October, claims that the campaign of which this poster is part was “rejected for outdoor displays in London because of their ‘political overtones’”. The story goes on to claim that the “rejected” posters were replaced by ones that simply say “redacted”, before urging readers to download an RT app to view the ads on their phones.

But I have seen the poster. I even took a picture. Yet RT insists it has been banned, saying that outdoor advertising companies cited the Communications Act 2003, which “prohibits political advertising”. This prohibition is indeed to be found in the act, but only applies to broadcast advertisements, not billboard advertisements for broadcasters.

This is a fairly crude illustration of RT’s attitude to the truth. It is simply not an issue. What’s important is something that might sound true, something just about plausible, to suit the agenda (in this case, the agenda is threefold: one, to get people to download the app; two, to sow the belief that “they” are scared of RT; and three, to introduce the notion that political advertising is subject to a blanket ban in the UK).

Fair enough, you might say. But have you seen Fox News? Don’t all sorts of news organisations bend the truth to fit their agenda? There’s a case to be made, but there’s also a crucial difference. RT is funded and controlled by the Kremlin and is on a mission; a mission outlined in a new report by The Interpreter, part of the Institute of Modern Russia (disclosure: Index on Censorship has on occassion crossposted content from The Interpreter).

“The Menace of Unreality: How the Kremlin Weaponizes Information, Culture and Money” elucidates what we had already long suspected: the Soviet Union may be dead, but Soviet tactics remain. And while the west may not want to believe it is in conflict with Russia, the Russians are already acting like it is (witness reports of heightened Russian air force activity in and near Nato airspace).

The report’s authors, Michael Weiss and Peter Pomerantsev, describe disinformation techniques dating back to the Soviet era: straight propaganda, certainly, but also Dezinformatsiya — the planting of false stories to undermine confidence in western governments. These include alleged coup plots, the bizarre theory that AIDS was created by the CIA, even the suggestion that the assassination of Kennedy was an inside job.

The suggestion is that democracy is a sham, and that democratic governments are at best hypocrites and at worst constantly, deliberately acting against the interests of their own populations.

The best false stories always have a ring of truth and a ring of empathy. Many politicians are hypocrites, some politicians act against the interests of those they should represent. If this much is true, is it that much of a leap to imagine that the entire system is a crock? That democracy and human rights are empty terms? We’re just asking legitimate questions, as every conspiracy theorist ever has said at some point.

Conspiracy theorists find a home at RT. Presenter Abby Martin, for example, who briefly won praise for apparently criticising Russia’s actions in Ukraine, says she still has “many questions” (just asking questions!) about the September 2001 attacks on the World Trade Center, and has used her show to expound on “false flag” attacks, alleged Israeli eugenics, and every US conspiracy theorists’ favourite, the massacre in Waco, Texas of David Koresh’s Branch Davidian cult in 1993.

All this would mean nothing if RT didn’t have a willing audience in the UK, the US and beyond. But a combination of a large budget, photogenic presenters and a certain way with a YouTube clip makes RT a serious player. It never quite veers into the straight out lunacy of Iran’s Press TV, which is quite open about its conspiracist contributors, and it looks like a serious operation. Furthermore, its positioning as an “alternative news source”, albeit one controlled by an increasingly authoritarian, paranoid and erratic Russian state, finds it fans among people who would rail against their own liberal states and societies (on the two occasions I visited the Occupy St Paul’s encampment in London, Russia Today was playing on a large screen there). All the while, the autocratic Putin is strengthened as democracy in undermined worldwide (witness how easily Putin was able to put the kibosh on effective intervention against Syria’s Assad through the relentless repetition of the line that helping the opposition would mean helping jihadist terrorists).

So what, as Lenin himself once asked, is to be done? After reports of UK broadcast regulator Ofcom’s recent investigations into RT for bias earlier this week, some people saw a chance to get RT taken off the air just weeks after it had begun. But this impulse is too close to political censorship in principle, and in practice, an ineffective sanction against a force that has huge power online, with millions upon millions of YouTube hits.

Decent democrats that they are, Weiss and Pomerantsev suggest eternal vigilance is required: we must be able to combat RT’s half truths and insinuations effectively, with hard facts and hard arguments, in order to stop them spreading. As ever, when arguments for counterspeech as the best defence against poison is suggested, one remembers Yeats’s lines: “The best lack all conviction, while the worst/Are full of passionate intensity.”

But this time 25 years ago, as East and West Germans embraced on top of the Berlin Wall, the world showed that the right argument can win even against the very worst. The Kremlin is playing the same games now as it did in its darkest days. Democrats should be ready to fight back.