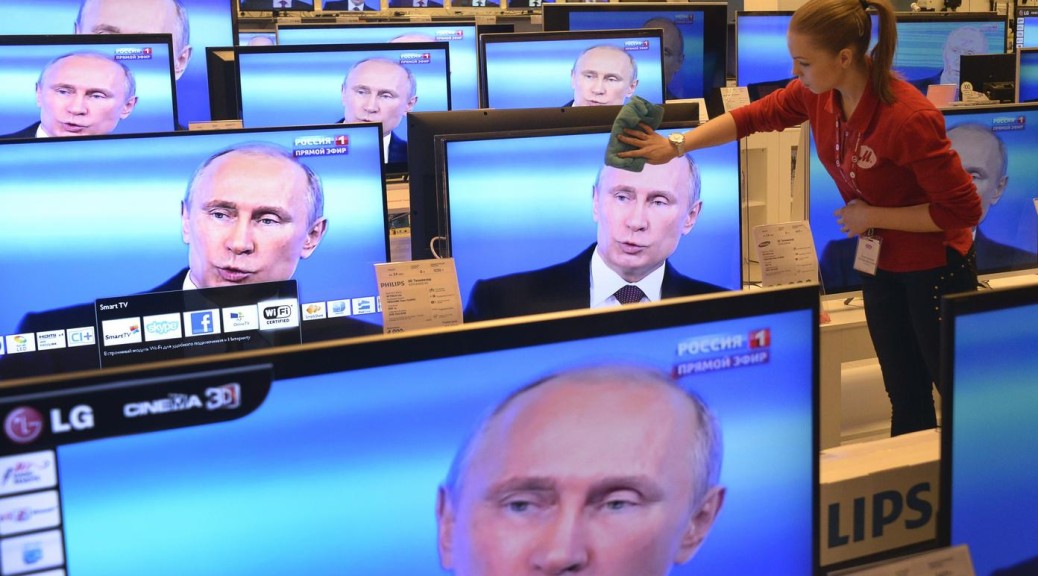 According to the Kremlin-controlled media, only Vladimir Putin is capable of dealing with the situation.

However, there are other propaganda techniques that make even the nastiest, most aggressive and ugly lies into something attractive to the public. These include the exploitation of certain subconscious archetypes embedded in Russian (and not only Russian) psyche from childhood; skillful manipulation of psychological needs, as well as direct flattery.

The simplest and most common means used by all totalitarian regimes is, of course, exploitation of the sense of the collective, i.e. a person’s need to feel part of a large close-knit community – the sense of “belonging.” The famous Soviet writer Yevgeniy Zamyatin explored this in his novel “We.” From the beginning propaganda has exploited the collective principle through contrasting the “patriotic majority”, the “nation”, “normal people who reject fascism,” and corresponding negative images: “national traitors” minorities, “liberals”, and similar “overt and covert enemies.”  Such contrasts create a simplistic but clear view of the world. The public is made to believe that the government is protecting them, and they should support it. The idea that enemies surround them bolsters this mythical collective, and belonging to the majority gives the individual the illusion of strength and security.

In contrast to the Soviet era, Russian propaganda now also exploits individualism and elitism, the sense of being “chosen” because of one’s unique moral qualities or special awareness. If in Soviet times all the citizens of the USSR were to be “conscious and patriotic” by definition, today’s propaganda emphasizes patriotism and commitment to sacrifice for the sake of the homeland as a rare trait that only a few were able to sustain throughout the “dashing 90s” and the “false values of the consumer society.”

The exploitation of “secret knowledge” plays on childhood experiences. Almost every one of us at some young age read detective stories, watched movies about cops and criminals, and wanted to discover the unknown.  Propaganda skillfully gives its consumers easy and affordable access to such “secret materials”. Just look at some of the journalistic “investigations” of NTV. They purport to be “impartial” and “well-documented,” full of “declassified” documents, financial reports, secret audio recordings and hidden camera video made in closed meetings. Some of these documents are real, but some are faked.  In most countries, such information is under the purview of the security services, but in Russia it becomes a propaganda tool supposedly revealing the “sacred truth” but in most cases adding to a mere grain of truth tons of fabrication. Usually these “investigations”” depict the USA as a “mighty adversary” which “secretly manipulates” policies in order to “harm” or “weaken” Russia. “Documentation,” both real and faked, serves such anti-American stance.

Such “investigations” draw the viewers in like a spy movie but featuring real people, and many are taken in. It awakens in the viewers the sense that they are being allowed into the “holy of holies” – to the depths of secret “enemy plots and dirty laundry” exposed by Russia’s diligent security services. After viewing this, the public believes they know the intricacies of the “machinations of the (US) State Department.”

Russian propaganda exploits yet another archetype of childhood: a black-and-white vision of the world, the division between “us” (the “heroes”, “patriots”, “good citizens”) and “them” (the “US agents”, “spies”, “extremists”, “liberals”, “traitors”). Some very intelligent friends often complained to me that common sense tells them they should not believe Russian propaganda, but they would very much like to do so. “How simple and clear then the world would be, and what a pity that it is really not like that,” – they complain. The desire to believe in a righteous fight, in the idea that there are just villains in the opposite camp is a favorite subject of children’s play, with heroes and villains – and nothing else.

Totalitarian society immerses people in childhood fantasies. There is always a “father” (leader of the nation, strong and infallible), enemies from which the “father” protects his “children”; there is a collective (analogue of family) elitism similar to parental praise; there is a secret and duels, almost like in the books of Alexandre Dumas. But this carries with it a serious risk for the propagandist:  if a society is not prepared for totalitarian mobilization, the number of people tempted by the “sweet poison” may be fewer than the dictator wishes.

This may be happening in modern Russia. If the initial euphoria of the annexation of the Crimea, as well as the horrors unfolding in the Donbass war paralyzed the ability of many to think critically, and propaganda plunged the majority of Russians into an illusory world, the euphoria now has cooled. Most people cannot remain indefinitely excited and nervous, and despite relentless propaganda, initial fears, hatred and other strong emotions wane, followed by something completely different: dissatisfaction, anxiety about deteriorating living conditions, frustration. Some people try to understand of what is happening, while moral principles are awakened in others.

“People approach me in the store where I work and on the street, greet and encourage me, and no one, thank God, spits in my face. Not everyone is courageous enough to openly express their dissent, but people are starting to wake up.” – Yekaterina Vologzheninova from Ekaterinburg unjustly convicted of extremism after she re-posted a text from a Facebook page critical of Russian aggression in Ukraine.

Support for Yekaterina is growing despite propaganda against her on local TV, where she was labeled “a Russophobe and Ukrainian nationalist.” It became clear that in her case the law enforcers and informers, through a fabricated criminal case, waged a war against this defenseless single mother exclusively for her anti-war stance. As Yetaterina says, she was supported even by those who at first condemned her views.

Strengthening the collectivist sense in contemporary Russian society is difficult because of an increasing atomization of the society and strong mutual distrust. Mass passivity formed during the years of authoritarian rule is also not so easy to translate into the mobilization of a Stalinist-type regime.

As a result, the propaganda of hatred and aggression yields not so much the results desired by the authorities of a cohesive society, but rather to increasing its division. If the influence of the first massive wave of deceptive television propaganda was almost universal, it is becoming increasingly evident that there is a division between those who entirely succumbed to the “sweet poison” and now are happily involved in persecution and denunciation against “enemies” and those who have become disenchanted. Such people, as Vologzheninova rightly observed, are still afraid to openly express their dissatisfaction, but their number is growing more than might be suspected.

As the crisis and repression grow, both categories, adherents and opponents, become more radicalized, and this trend pushes Russian society toward the dangerous brink of possible civil war. Continued propaganda hysteria amplifies this risk, creating an unbridgeable gap between those who fit into the mainstream of the “sweet lies”, and those who fiercely oppose it.

Ksenia Kirillova is a publicist, journalist of the New Region