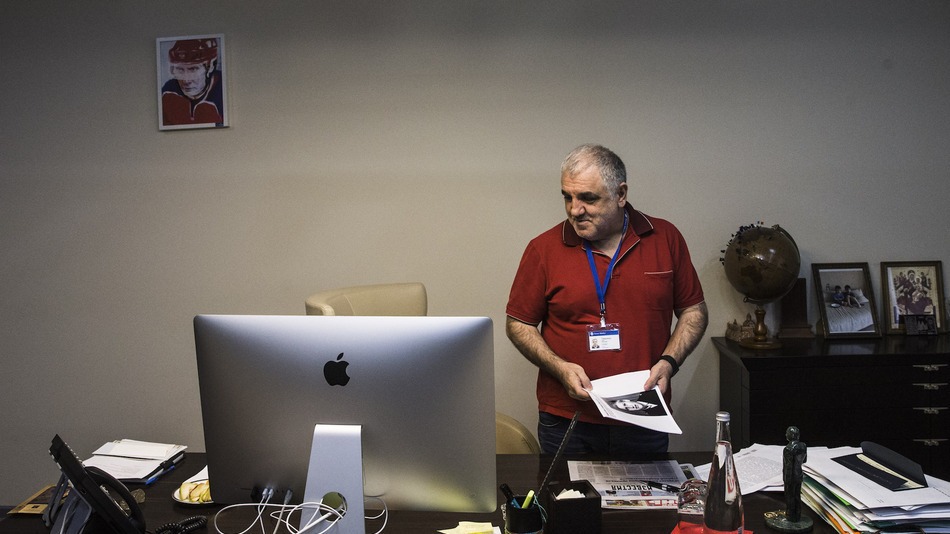 Aram Gabrelyanov isn’t a man to mince words. And what this tabloid king really dislikes are “assholes” and “traitors” who challenge Russian President Vladimir Putin.

As if to dispel any doubts about his allegiance, his office has been decorated as a shrine to the president: On the wall above his desk hangs a portrait of Putin in hockey gear; a collection of photos of the president — as a young man, a KGB agent and as the leader of Russia — is displayed prominently on a bookshelf.

“I believe that the national leader should be beyond criticism,” says Gabrelyanov, in the Moscow offices of LifeNews, the sensationalist and popular 24-hour television channel and website he founded with his son Ashot. (His son served as general director until last year when he quit and moved to Brooklyn to launch a news app named Babo.)

The older Gabrelyanov resembles a boxer out of a 1930s gangster noir — he is jowly, sports dark stubble and his handshake is crushing. But his disposition is gregarious rather than menacing, and he has a ready arsenal of witty anecdotes and scintillating stories.

The channel is owned by the News Media holding company, fifty percent of which in turn is owned by the National Media Group of Yury Kovalchuk and Gennady Timchenko, two of Putin’s billionaire cronies who are on the U.S. government’s sanctions list.

Gabrelyanov denies that Russian security services use the channel to spread stories but freely admits that “doctors, nurses, police officers, politicians, all sorts of people” are on the LifeNews payroll. He calls these leakers “agents” and while he pays his staff salaries nearly five times what other outlets pay, the newsroom understands that a big portion of their wages are meant to buy off sources.

The channel also gets a lot of unsolicited material for which they pay as much as $10,000 per video — visually arresting or newsy events such as the arrival of NSA whistleblower Edward Snowden in Russia in 2013.

Despite its reach and high-profile nature, this media empire isn’t housed in a shiny high-rise on one of Moscow’s broad boulevards but rather on the outskirts of the capital, penned up against a highway overpass and tucked inside the crumbling shell of a hulking Soviet-era building that’s also home to several state-controlled media companies.

If LifeNews offers any lessons it would be that appearances can be deceptive.

Inside this building are state-of-the-art studios and more than 600 reporters and producers who write stories and create television shows that shape how Russians see the world.

And that world isn’t always balanced — or pretty.

After two female suicide bombers blew themselves up inside Moscow’s metro during morning rush hour in March 2010, LifeNews editors didn’t hesitate to publish photos of their severed heads on the website.

LifeNews reporters also broadcast extremely graphic images of bodies at the crash site of Malaysia Airlines Flight 17, and even though the plane was brought down in an area of eastern Ukraine controlled by Russia-backed separatists, the television station has worked hard to blame the crash on Ukrainian forces, often described as “fascists” or “Nazis” on air.

LifeNews regularly airs glowing features about two pro-Russian rebels known as Motorola and Givi — men who in eastern Ukraine are known for their brutality. (Motorola has boasted of killing 15 Ukrainian prisoners and Givi has threatened Ukrainian captives with a machete, forcing them to eat their insignias.)

Conspiracy theorists feature prominently on the channel. After the deadly shooting at the magazine Charlie Hebdo in Paris, a so-called analyst got considerable airtime with the claim that American intelligence services were behind the attack.

“We make mistakes but we never lie on purpose,” Gabrelyanov says. “We tell the truth — of course — but we tell it the way that will lead the audience to the conclusions we need. That is what our country, our ideology, needs.”

Some might call that propaganda. But it may be more accurate to say that in today’s Russia “the idea of truth is irrelevant” as Peter Pomerantsev, who spent several years as a producer for Russian television, wrote recently.

“On Russian ‘news’ broadcasts, the borders between fact and fiction have become utterly blurred,” Pomerantsev wrote.

“I say that Navalny is a part of the fifth column and he works to pull the country apart,” Gabrelyanov says. “How else can we describe someone who gets support from the American embassy?”

“I know our authorities are not perfect…but that doesn’t mean I should wait for Navalny to organize a [revolution] to throw people in garbage cans as they do in Ukraine,” he says. “I won’t let it happen.”

When asked about Boris Nemtsov, the former deputy prime minister and opposition leader who was gunned down in a gangland-style assassination near the Kremlin in February, he simply says: “It’s a bad thing that Nemtsov was killed. But honestly I was not upset when it happened.”

Putin is “the only thing that keeps the country together,” he says.

Zhanna Nemtsova, Nemtsov’s daughter, recently wrote in an op-ed that propaganda by pro-Kremlin outlets is dangerous. “Russian propaganda kills,” she wrote. “It kills not only intelligence and common sense, but it literally kills.”

As things stand, the Kremlin enjoys nearly full control over the media, especially television from which most Russians get their news. All the major channels are either owned by the state, loyal to it, or directly overseen by Kremlin officials who dictate what should — and shouldn’t — be broadcast.

The country’s only independent television channel — TV Rain — operates on a razor’s edge, constantly harassed by authorities and with little money to produce programs.

“There’s no trouble if a certain part of the mass media is scoop-y, yellow and politically biased,” said Vasily Gatov, an expert on Russian media and a senior fellow at the University of Southern California. “The trouble comes when the mainstream is becoming like LifeNews.”

In Russia, state-controlled media all take a page from the LifeNews book, serving up sensationalist, pro-Kremlin, hyper-nationalist news — perhaps contributing to Putin’s approval rating of 86%.

Gabrelyanov studied journalism at Moscow State University as a young man and it was here, at the library, he was exposed to western tabloids which he found more interesting than the Soviet press. “I figured out…how they affected people’s minds,” he says, “and pushed readers to the conclusions they needed.”

During the 1980s, in the provincial town of Ulyanovsk, he founded what would eventually become a formidable media empire, at first fueled by the success of the gossip-filled Zhizn, which now has a circulation of more than 1.5 million.

Today, LifeNews and the various titles of News Media gives Gabrelyanov a platform to further his stated aim: to restore Russia to its rightful place in the world — at the top. And reestablishing Russia as a global superpower is a goal he shares with Putin.

“It was shameful for us when [President Boris] Yeltsin was drunk and tried to lead an orchestra. And I was so ashamed when [President Mikhail] Gorbachev gave away all the interests of the country,” he says.

“But Putin is a man I am proud of,” he adds. “Fifteen years ago when he took the power, the land was ruined and robbed. Now we are on our way to develop our values.”