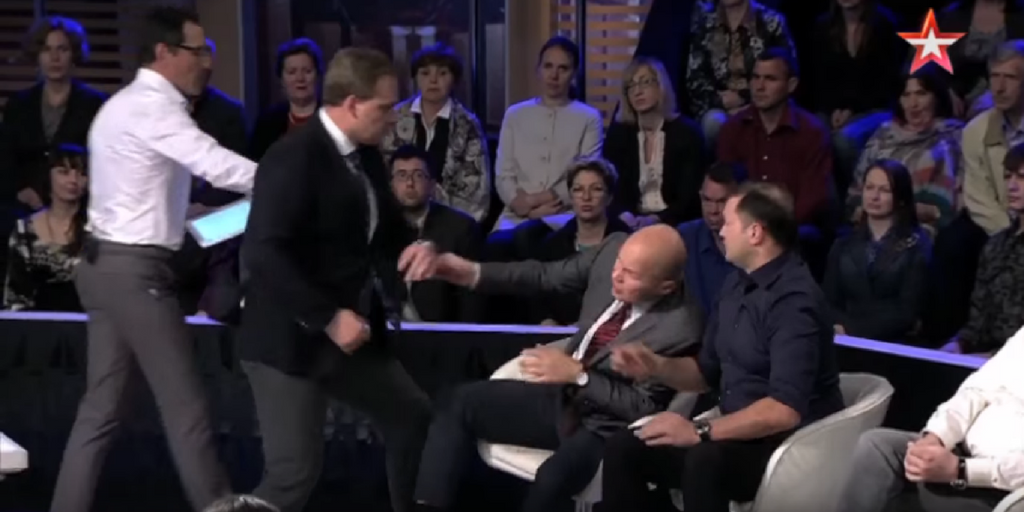 The atmosphere in talk shows on Russian state-controlled TV channels has become increasingly aggressive over the past three years. More and more often, aggression does not limit itself to shouting and verbal intimidation. Physical attacks live on air have become a central part of debate programmes, and the most frequent victims of these attacks are foreign nationals.

Below are three examples of incidents when participants of non-Russian background have been subjected to physical violence from the side of hosts and other participants in talk shows on Russian national TV:

Click to watch the 27 seconds during which Michael Bohm, an American commentator, is physically attacked by talk show host Artyom Sheynin. The incident occurred on 12 October in the Vremya Pokazhet (“Time will show”) talk show on state TV Pervy Kanal during a discussion on the closure of the Russian consulate in San Francisco.

Click to watch Polish commentator Tomasz Maciejczuk being attacked by another guest, chief editor of Politrussia, Ruslan Ostashko, in a discussion about the role of the Soviet Union in World War 2. The incident took place on 26 April 2017 during the talk show Mesto Vstrechi (“Meeting place”) on government-controlled NTV.

Click to watch Ukrainian commentator Vyacheslav Kovtun attacked in a talk show on the official TV channel of Russia’s armed forces, Zvezda, in a debate over current affairs in Ukraine. Mr Kovtun, who expresses pro-Ukrainian views, is attacked by a Ukrainian national with pro-Kremlin views, Yuriy Kot. The incident occurred on 26 May 2016.

Where there is physical violence against foreigners on TV channels controlled by the Russian government, there is also disinformation. For an overview of disinformation appearing in the talk shows and on the channels mentioned in the above examples, follow these links to our database with examples of pro-Kremlin disinformation:

Examples of disinformation appearing during the talk show Vremya Pokazhet (“Time will show”) on state-owned Rossiya-1.

Examples of disinformation spread by Zvezda (“The Star”), the official TV channel of Russia’s armed forces.