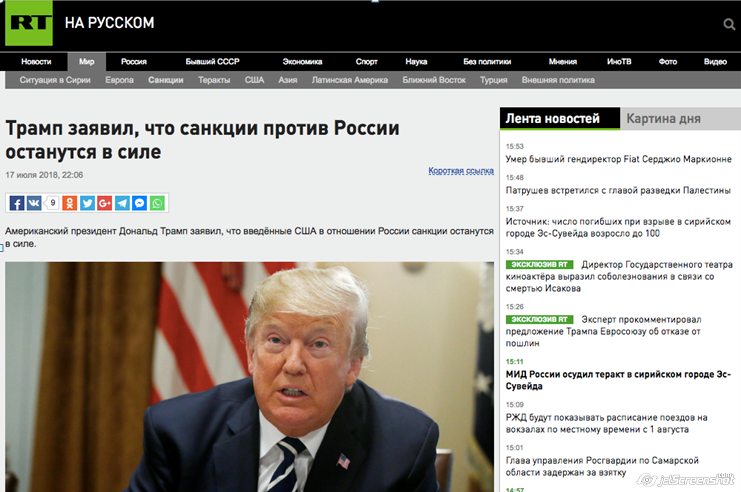 After last weekend’s summit between Donald Trump and Vladimir Putin in Helsinki, widely held in the West as a blow to American global leadership but hailed by Russian foreign minister Sergei Lavrov as “better than super,”[1] one would expect the Kremlin to be “having caviar,” in the words for American Senator Bob Corker.[2] Indeed, presenters on Russian state television seemed as bewildered as their American counterparts with Trump’s “very bizarre” obsequiousness.[3] From such comments, some Western pundits assumed that the Russian state-run media must be having a field day after the summit, while in fact, self-congratulation has been the exception. Although some pieces in RT, Kommersant, TASS and other Russian-language news outlets emphasized parity between Trump and Putin, this hardly amounts to declaring the two leaders “BFFs,” let alone the U.S. and Russia “allies.”[4]

To the contrary, Russian coverage of the summit displayed a degree pessimism unusual even for the land of Dostoevsky, ranging from cynicism to outright animosity towards the U.S. The vast majority of headlines in Russian media in the week before and after the summit fell under one of three meta-narratives: first, Trump actually talked tough on Putin; second, the summit didn’t change anything; third, the liberal ‘establishment’ is in hysterics over the very idea of improving U.S.-Russia relations. These deliberately confrontational narratives hint at what diplomats dealing with Russia have been saying for years: Putin doesn’t actually want good relations with the United States.

Before the dust had settled on Trump’s weak behaviour in the days following the summit, Russian media articles picked up on Trump’s few negative statements about Russia to suggest that the American president had in fact stood up to Putin. RT featured an article titled “Trump said he agreed with the intelligence report on “Russia’s interference” in the US elections,”[5] while another linked to an article from Fox News titled, “I’m not for Russia.”[6] Curiously, one headline edited in Trump’s correction from ‘would’ to ‘wouldn’t’ into the original quote about Russian interference to make the original statement sound more confrontational: “’No collusion, but I don’t see any reason it wouldn’t be Russia.”[7] TASS also ran an article proclaiming that “Trump says he would hold Putin responsible for alleged interference.”[8] A lot of Americans would be relieved to hear this, because it seemed to many that he refused to do exactly that.

f it had wanted to, pro-Kremlin media could have easily looked past Trump’s tepid to non-existent criticism of election meddling given the volume of attention which has already been given the issue in the two years since the Intelligence Community’s seminal report. That they have dragged the meddling narrative on to this extent suggests either that Putin derives a reputational benefit from being cast as the “ ever-victorious master strategist,”[10] or the issue is being used as a wedge between the countries, emphasizing Russia’s victimization (or both.) This could also explain why it was Putin who introduced the theme of election meddling in his opening speech to the press conference,[11] and why Russian media has had to insist that Trump does in fact disagree with Putin on Crimea, contrary to Western fears.[12]

Narrative #2: The summit changed nothing.

Before the conference, many articles echoed previous statements[13] by Trump National Security Advisor John Bolton that “the very fact of the meeting is a positive event”[14] urging low expectations on both sides. For instance, RT contributor Stephen Cohen alleged that the meeting was doomed from the start because of the Mueller investigation in the U.S. was “crippling Trump’s presidential duty to cope with the gravest international threats” while Kremlin hardliners dismissed Putin’s “illusion” of being able to negotiate with the West. Others traced the original sin further back, to the expansion of NATO which “gambled” relations in the last decade leaving Trump “powerless” to change the state of affairs. Afterwards, the tone ranged from nonchalance to defeatism: “In fact, it was quite a harmless encounter, which changed little,” explained one RT editorial;[15] “No meetings will help,” another analyst moaned.[16] Any positive outcomes from the summit must be discounted to account for the “extreme fragility and instability of Trump’s power;”[17] he is an “alien (chuzhoi) against everyone.”[18]

Narrative #3: The Western establishment is hysterical at the thought of merely talking to Russia

The effort to dismiss any historical significance attached to the contemporary Helsinki summit folds nicely into the third Russian media narrative: that the West has erupted into “hysterics” at Trump’s innocent attempts to defuse tensions with Russia. Before the conference, articles portrayed uncertainty among U.S. and allied policymakers about the agenda of the meeting to suggest a conspiracy against the mere “prospect of the presidents of the US and Russia getting together.”[20] Headlines reacted in mock surprise: “Apocalyptic reaction,”[21] “Summit of Betrayal,”[22] “Fantasies and absurdity.”[23] Labelling opponents as paranoid, hysterical or otherwise mentally unstable is a time-tested Soviet tactic which has also been used to cast doubt on the Skripal poisonings.[24] Pundits theorized about the potential explanations behind the rabid reaction, including a “Deep State” obsessed with demonizing Vladimir Putin, “collusion” between the State Department and Congress to block Trump’s outreach, and “defense industry lobbyists” pumping up a chimerical threat for profit.

Above and beyond these narratives, one must also note the dog that didn’t bark: the lack of attention to substantive issues such as sanctions, Crimea, Nord Stream II or Syria both before and after the summit. This is particularly perplexing given the ample opportunity “black belt” negotiator Putin had to extract some sort of concession from Trump in their two-hour private chat. Yet, despite the Russian Embassy in the United States’ tweet that the military is “ready for the practical implementation of agreements”[25] from Helsinki, and Lavrov’s teaser that the two leaders “will tell you everything soon,”[26] not a single deliverable has followed.

Sorry Trump, Putin’s just not that into you

The only conversation to which we are privy is that concerning the exchange of American activist and businessman Bill Browder and former U.S. Ambassador Michael McFaul for interviews with GRU agents, which Putin (although seemingly not Trump) must have understood would fuel outrage[27] in all corners of the American government. Threatening to interrogate a former diplomat on patently absurd charges is not what you do to launch a new era of cooperation and friendship. Similarly, Russia’s vocal, acerbic reaction to the indictment of suspected Russian spy Maria Butina in the United States suggests, at the very least, their lack of attempt to minimize confrontational issues for the sake of cooperation with the U.S. Indeed, #FreeMariaButina stories quickly drowned out coverage of Helsinki on the front pages of many news sites, one point taking the top spot in the Helsinki section of TASS’ website. Thus, the Kremlin’s unexpected dismissal of a second meeting at Trump’s invitation might not be designed to help Trump’s domestic reputation[28] so much as Putin’s.

The theory that the Kremlin does not see a benefit in truly befriending America lines up with the sudden reversal that architects of the Reset policy experienced following Putin’s return to office in 2012. When Russians took to the streets to protest his ‘re-election,’ at the same time as Arabs toppled their dictators in the Middle East, Putin abandoned the cooperation which had characterized Medvedev’s term and blamed the CIA for trying to foment revolution.[29] It is not clear that fortress Russia can let down its drawbridges to a country so often portrayed as enemy #1. If not America, whom else can Putin blame for Russia’s draining coffers, dying soldiers, inflating prices and diminishing life expectancy? Once the promise of sanctions relief was torpedoed by firm Congressional guarantees, and while Ukrainian sovereignty over Crimea remains widely recognized in the West, there is little substantively that Russia can demand from America. Yet rhetorically, the United States plays a vital role as the stage upon which the Russian media enacts Surkovian fantasies to keep its population insulated and paranoid. As we saw in Helsinki, the Kremlin seems to know precisely which strings to pull to get America to play its role with vigor.