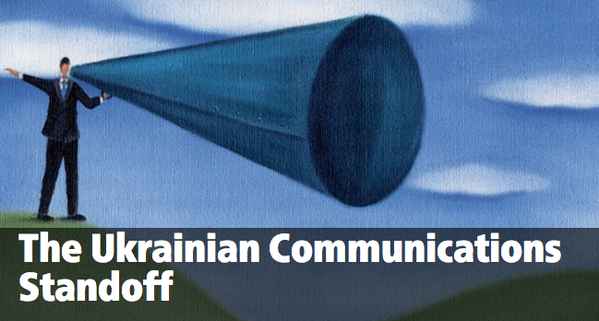 In all political conflicts, when feverish crisis management turns into stalemate and the focus shifts from who acts quickest to who lasts longest, communications becomes of the essence. This moment has now been reached in the Ukrainian standoff between the West and Russia.

Granted, escalation dominance still lies with the Kremlin. Moscow is in the tactically advantageous position of being able to scale up or down its involvement in Ukraine’s eastern Luhansk and Donetsk regions almost as it wishes.

No one really knows what further ambitions Russian President Vladimir Putin harbors, or what additional show of strength he needs for long-term political survival at home. He might be satisfied with the status quo, having created another frozen conflict that guarantees him unlimited access to Ukrainian domestic affairs for the foreseeable future. Or the world might wake up tomorrow to see more territories occupied, more borders moved, and more people’s lives ruined.

After what everyone thought was a nerve-racking crisis, the real nerve game starts now. The two sides have taken their positions. The West is siding with the new government in Kiev and has slapped sanctions on Russia for its aggressive violations of international law and of several treaties and agreements. The West’s hope is that sanctions will bite and that Ukrainian President Petro Poroshenko can make his country a success quickly enough that Moscow realizes it must change course. The longer the standoff lasts, those in the West believe, the more urgent it will be for Putin to crumble.

On the other side of the equation, Russia has annexed Crimea and is quickly solidifying its position in eastern Ukraine. Moscow hopes to undermine Poroshenko’s reform effort with the ultimate goal of winning back political control of all of Ukraine.

Putin, in the hope that the economic costs of sanctions will eventually undermine the Western position, is banking on Western short-termism to prevail. The longer the standoff lasts, he believes, the higher the chances that the West will succumb to its usual greed and lack of spine.

To speed up this process, the Kremlin has unleashed a carefully crafted and skillfully executed communications campaign to sway public opinion in key Western countries. Audiences around the world, but specifically in Europe, are being hit hard by a combination of internationally targeted propaganda and a locally fine-tuned communications support effort.

I received my first personal taste of this when I was targeted by the Kremlin’s now-famous army of online trolls last week. I had been invited to discuss the West’s relationship with Russia on one of Germany’s prominent political talk shows. A day before the live broadcast, the show’s lineup was announced on Twitter, and within minutes, the smear campaign started.

Scores of unknown and mostly unidentifiable people heaped scorn on me, mostly on my own Twitter account, about 50 of them within the first two hours alone. It was enormously flattering, but it was also creepy and disturbing.

I am not the first person to experience such a barrage, of course. But to me, this episode demonstrated several things.

At first glance, it struck me how well organized the Kremlin’s propaganda crusade seemed. The timing was excellent, the Twitter profiles looked real enough, and the variations in messaging appeared reasonably wide.

Yet a closer analysis revealed how unprofessional the propagandists really are. Much of the actual text they sent was crude, unpolished cookie-cutter material, often repeated in slightly monotonous ways, as if taken from a list of suggested formulations. The campaign seems to have money and people, but it doesn’t seem to have anyone who can write, research, and react flexibly.

The experience also showed how desperate the online trolls are. When these guys have enough time to worry about me, they really are concerned about winning the information war. And that reveals how determined they are.

All in all, the episode reminded me of old Red Army tactics—not particularly sophisticated but massive in scope, well organized, and disciplined.

But it also made me ask another question: What is the West doing to counter this offensive? To be sure, some prime ministers, chancellors, and presidents have been outspoken. Also, NATO has repeatedly released very helpful material on the real state of affairs in the war between Ukrainian forces and Russian-backed separatists.

Generally, however, the official Western effort to oppose the tsunami of misinformation and deception coming directly from Moscow, even from top Russian political figures personally, has been very timid. Clever countertrolling, as conducted by the UK embassy in Kiev, has been the rare exception.

This lax response is a shame. Not only is it doing truth a huge disservice, it is also hurting the West’s chances to prevail in the nerve game that the Ukraine crisis has become.

The West need not worry about embarking on a more sophisticated strategic communications effort. It might look like the burden is unevenly shared in this war. Putin, who for the time being has less concern for critical voters or a free and investigative media at home, is able to focus on the propaganda campaign abroad. Western governments, by contrast, are forced to maintain public support for a complex diplomatic high-wire act and must find a convincing voice in the cacophony of open society’s noisy marketplace of ideas.

In his market back home, Putin has almost complete freedom to frame the issue on his terms, whereas Western governments have very little of that ability in theirs. This is especially true as considerable parts of the press in the West have at least a modicum of sympathy for Putin, to put it mildly.

Western governments should brief the global press and their publics at home about progress in Ukraine on a regular basis, at least twice a week. Web sites with authentic material should be compiled and promoted as soon as possible. Social media should be seen as the crucial channel that cannot be left to the Kremlin-paid goons.

This is a low-cost, high-yield strategy. In fact, it’s also rather fun. A bit like Angry Birds, actually—crushing one brittle house of lies after another. One should play it more often. It can’t hurt to enjoy some comic relief in a communications game of nerves.