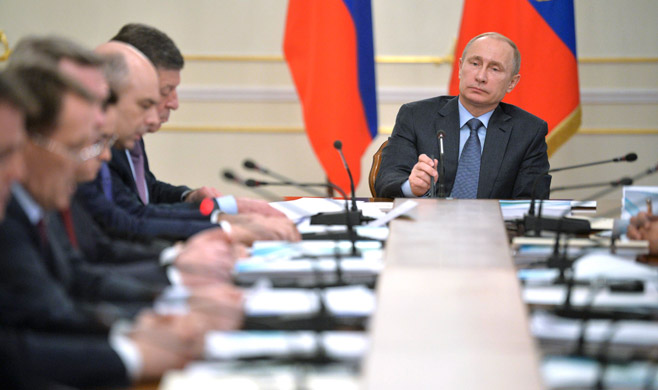 At the beginning of the Ukraine crisis, German Chancellor Angela Merkel is said to have told U.S. President Barack Obama that Russian President Vladimir Putin was “in another world.” After months of near-constant shuttle diplomacy, a mere 48 hours after Minsk II was concluded, the West had to watch a humiliating Ukrainian rout at Debaltseve.

While on a recent visit to Hungary, Putin gloated, “Obviously it’s bad to lose, but life is life and it still goes on.” It seems more and more clear that if anyone is living in another world, it is Western leaders.

Minsk and the subsequent Debaltseve collapse revealed the reality of the West’s own situation — it negotiated with Putin on his terms and in his world. It is clear that the West has an interlocutor in Putin whose objectives are not transparent, promises are not trustworthy, and who is making decisions that have heightened conflict in the region.

Last December, an international consortium of investigative journalists, the Organized Crime and Corruption Reporting Project (OCCRP) named Putin their “person of the year” for 2014, “for his work in turning Russia into a major money laundering center for enabling organized crime in Crimea and in the Donbass region of eastern Ukraine; for his unblemished record of failing to prosecute criminal activity; and for advancing a government policy of working with and using crime groups.”

A runner-up was Hungary’s authoritarian Prime Minister Viktor Orban who is on record as wanting to establish an “illiberal democracy” in Hungary.

Most analysts concede the depth of Kremlin thievery and U.S. sanctions specifically target “team Putin.” The question however is whether kleptocratic tendencies are central or peripheral to the conduct of Russian policy. Those, like myself, who say they are central agree with opposition activists like Boris Nemtsov that Putin’s building and renovation of 20 palaces, his receipt of $700,000 in watches and his unlimited access to yachts, planes, and a Kremlin property management department with a staff of more than 60,000, and an annual presidential office budget of $2.41 billion is costly in terms more than treasure.

It also reveals that at the system’s heart is total bespredel — limitlessness. Unconstrained by laws, rules, or any sense of decency, Putin stands astride the world’s largest gap between rich and poor.

Credit Suisse noted in 2014 that “inequality in Russia is so far above [all other countries] that it deserves to be placed in a separate category.” The top decile of wealth holders owns 85 percent of all household wealth in Russia, while 83 percent of the population has less than $10,000 in personal wealth.

Instead of the state acting as a market regulator and redistributive agent, kleptocratic interests at the top have only fueled the tendency toward monopoly and state capitalism. Allowing Kremlin cronies to raid less protected entrepreneurs has stymied development and encouraged capital flight, exceeding $150 billion in 2014.

Russians can only secure property rights by keeping money in foreign banks or buying apartments abroad. But by doing so, they never develop a vested interest in the emergence of sustainable legal and financial systems in Russia.

Transparency International ranks Russia positively in terms of human development but negatively in terms of judicial independence, press freedom and corruption. The population has the skills to make a transition to a law-based society, but the state has taken the country in the opposite direction.

As regimes close politically, the quality of decision-making always declines. And when closeness to the leader also depends on willingness to maintain a tribute system based on gifts, fealty and silence, professional advice takes a backseat to slavish expressions of loyalty.

More and more of the high-ranking posts are going to people not just connected to Putin since the St. Petersburg days, but also his own relatives and relatives of his friends. Sitting on the Scientific Council of Moscow State University and director of Innopraktika — a $1.7 billion project to build a Russian Silicon Valley — is a certain Katerina Tikhonova. Russian opposition figures claimed at the end of January that she is Putin’s 28-year-old daughter.

Two sons of Putin’s cousins similarly hold positions in the gas industry, as do many other top leaders’ children.

In addition to officials being placed in positions less because of their expertise than their relationship to Kremlin officials, decision-making is slowed while everyone waits for Putin. Even in his first year in office a fire in the Ostankino television tower burned out of control until he had given the order to cut the electricity. Three firemen died.

Also in 2000, 118 young men aboard the nuclear submarine Kursk died a slow death at the bottom of the Barents Sea tapping out rescue messages as the military waited for Putin’s decision to accept international help. Over the time of Putin’s tenure, Kremlin insiders have come to talk less about the “vertical of power” — decisions made along a chain of command, and more about “manual control” — all decisions made at the top.

The pressures of making all the decisions, combined with fear by subordinates of making any, only weaken state response to crisis. One could see this in Putin’s rambling answer last December during his annual news conference to a question on the government’s response to the ruble and oil price collapse.

“I said that given the most unfavorable foreign economic situation this could last (approximately, because no one can say for certain) for about two years. However, it may not last that long and the situation could take a turn for the better sooner. It could improve in the first or second quarter of next year, by the middle of next year, or by its end. Nobody can tell. There are many uncertain factors.”

Should anyone criticize the president for his less than commanding performance, they could easily be branded as an enemy. The reemergence in the official political lexicon of denunciations of opponents as speculators, fifth columnists, traitors, foreign agents and fascists further weaken the quality of decisions.

Those Kremlin elites who came to power to become rich now are faced with sanctions and visa bans that keep them in Russia. It might be hoped that over time they will lobby for real laws to protect their gains. But the state takeover of Sistema’s subsidiary Bashneft late last year suggests the Kremlin will continue to consume juicy morsels at will.

It is not encouraging for Russia, for the West or for Ukraine and the Baltic states that Russia is ruled by a leader whose actions he may describe as serving Russia’s interests, but which clearly do not in the long run.

Unless we recognize what we are dealing with here — a kleptocratic authoritarian regime which has and will use many levers to undermine, divide and defeat the West, it may be historians who will ultimately write that it was the West and not Vladimir Putin who once lived in another world.

By Karen Dawisha, The Moskow Times

Karen Dawisha is the author of “Putin’s Kleptocracy: Who Owns Russia?” and the director of the Havighurst Center for Russian and Post-Soviet Studies at Miami University in Ohio.