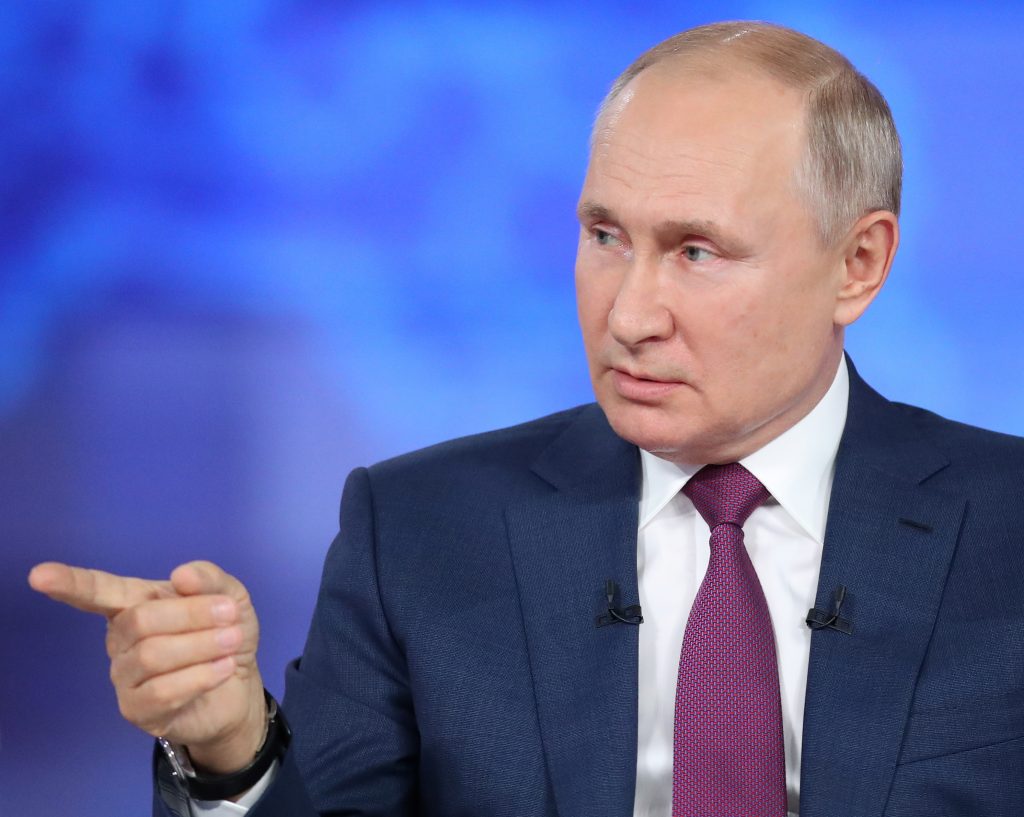 Russian President Vladimir Putin has finally published his hotly-anticipated essay on the “historical unity” of Russians and Ukrainians, and it did not disappoint.

This 5,000 word epic doesn’t contain anything entirely new, but it does serve as an important official record of the many myths and conspiracy theories that have long fueled Putin’s obsession with Ukraine. It also makes clear that he views his ongoing campaign of aggression against Ukraine as both an historic mission and a noble cause. Far from seeking to promote understanding and reconciliation between the two nations, the Russian leader’s article reads like a justification for an even larger war.

Throughout his rambling essay, Putin issues a number of thinly-veiled threats and repeatedly demonstrates his contempt for Ukrainian statehood. Independent Ukraine, he declares, “is entirely the brainchild of the Soviet era, and was to a large extent created at the expense of historical Russian lands.” He argues at length that today’s Ukraine is little more than a Western project designed solely to undermine Russia, and likens Ukraine’s post-Soviet nation-building efforts to weapons of mass destruction. Putin’s most ominous comments are reserved for the final few paragraphs. “I am convinced that true Ukrainian sovereignty is only possible in partnership with Russia,” he notes. “After all, we are one people.”

It would be easy to dismiss Putin’s historically illiterate assertions as harmless political posturing. But these are deadly delusions. Over fourteen thousand Ukrainians have been killed and millions displaced by Russian aggression since 2014. Russia continues to occupy Crimea and much of eastern Ukraine’s Donbas region, while the Kremlin has concentrated a large number of additional army units close to the border with Ukraine. When Putin publicly states that Ukraine is an anti-Russian project that can only be sovereign with Russia’s consent, the international community needs to take him very seriously indeed.

Greater international awareness of the reasons behind Putin’s Ukraine obsession would certainly be helpful.

Despite more than seven years of Russian aggression against Ukraine, many outside observers still struggle to grasp the true nature of the conflict and fail to understand why the Kremlin strongman is prepared to pay such a disproportionately high price to prevent the loss of Ukraine. Since the attack on Ukraine began in early 2014, Russia has been hit by successive waves of sanctions. Meanwhile, the country’s relations with the Western world have entered into a downward spiral of mutual suspicion and hybrid hostilities. What is it about Ukraine that has persuaded Putin to plunge the entire world into a new Cold War?

Putin himself provides part of the answer to this question with his constant references to Ukraine’s central role in Russia’s national story. He appears to sincerely regard Ukraine as an indivisible part of Russia’s historical heartlands, and views the country’s potential defection to the West as the next stage in a Russian retreat that began decades ago with the fall of the Berlin Wall and the collapse of the Soviet Union.

This resonates personally with Putin, who was an eyewitness to the disintegration of Soviet power in Central Europe during the late 1980s. The humiliation he felt while stationed in East Germany remains the formative experience of his political life and continues to inform his decisions, particularly in relation to Ukraine.

Ever since the 2004 Orange Revolution, Putin has been haunted by the idea of Ukraine acting as the catalyst for a new pro-democracy wave that could ultimately bring down his own authoritarian regime. When Ukrainians took to the streets again in 2014, he responded by ordering the invasion of Crimea and eastern Ukraine. These drastic measures reflected Putin’s conviction that the emergence of a genuinely independent, democratic, and Western-leaning Ukraine would eventually pose an existential threat to Russia itself.

Little has changed during the intervening seven years. Despite overwhelming evidence that his war against Ukraine has been a self-defeating blunder, Putin remains firmly in denial. He refuses to recognize the agency of the Ukrainian people or their increasingly obvious preference for Euro-Atlantic integration, and prefers to blame everything on far-fetched anti-Russian plots allegedly orchestrated by the West.

On numerous occasions since 2014, Putin has directly questioned Ukraine’s historical legitimacy and claimed that much of today’s Ukraine was unjustly taken from Russia. This unambiguously imperialistic approach to Ukraine shines through in his latest essay, which is as close as we are ever likely to get to a declaration of war against the entire notion of Ukrainian statehood.

The Russian leader’s recent article may not signal an imminent escalation in hostilities, but it does underline his continuing preoccupation with Ukraine and unwavering resolve to prevent the country from ever leaving the Kremlin orbit entirely. Putin’s obsession with Ukraine shows no signs of abating and remains one of the greatest threats to international security in the world today.

As long as the current confrontation remains unresolved, the possibility of a major war in Eastern Europe cannot be ruled out. Putin has already demonstrated his readiness to accept today’s Cold War climate as the cost of defending Russia’s claim to Ukraine. Given the right circumstances, he could yet seek a more conventional military solution to his Ukraine problem. his menacing essay is a reminder of the need for strong messages of deterrence from Western leaders.

This summer’s thirtieth anniversary of Ukrainian independence presents the democratic world with the ideal opportunity to answer Putin’s recent treatise. The Russian president has clearly stated his belief that Ukraine belongs with Russia. Ukrainian Independence Day on 24 August would be the perfect time for the West to make equally clear that Ukrainians have the right to choose their own future.