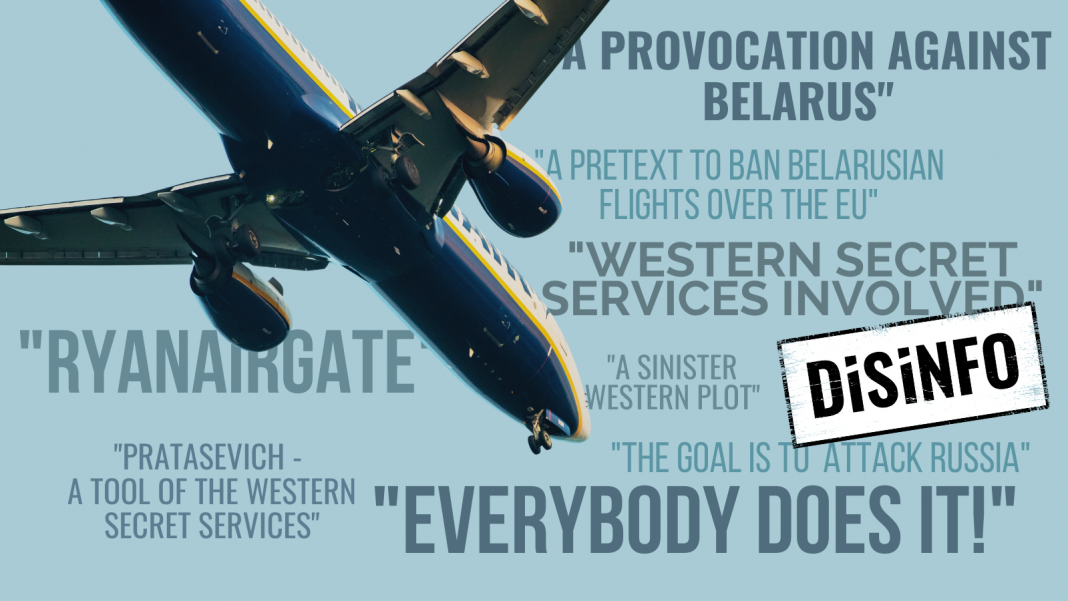 This week saw the continuation of pro-Kremlin disinformation efforts to justify the forced diversion and landing of a Ryanair flight in Minsk, in order to detain a Belarusian dissident, journalist Raman Pratasevich.

In a manner similar to disinformation campaigns following the poisoning and arrest of Russian opposition politician Alexey Navalny, pro-Kremlin outlets started to claim that this blatant act of state-sponsored piracy was in fact a provocation against Belarus and that Western secret services were involved in it.

According to the Lithuanian edition of Sputnik, Western secret services leaked information about Pratasevich’s journey to Minsk, as a pretext to ban Belarusian flights over the EU. The Spanish edition of the same outlet alleges that the goal of “Ryanairgate” was to sabotage the Minsk Agreements, whereas in Armenia, Sputnik claims that Pratasevich simply became a burden on his Western handlers and was abandoned. Abandoned, to provoke sanctions against Belarus.

Such messages, although hardly convincing, have several purposes. Firstly, they present the perpetrators as victims, aiming to obscure the link between the actions of Belarusian (Russian) authorities and their consequences for the country. Secondly, presenting Raman Pratasevich (Alexey Navalny) as a tool of Western secret services takes away their agency – opposing increasingly authoritarian regimes is thus never a matter of individual will, but rather a sinister Western plot. And finally, many different claims, even if mutually exclusive and perpetuating some wild conspiracy theories, also serve as a smoke-screen to create confusion about what actually happened. We saw such disinformation tactics applied to other difficult-to-defend acts, for instance the recent Russian military build-up near Ukraine.

This week, both the pro-Kremlin and Belarusian state-controlled media found one more way to defend the embattled Alyaksandr Lukashenka – by blaming the West for alleged “double standards”.

The catalyst for this kind of narrative was the unscheduled landing of a Ryanair flight from Dublin to Krakow in Berlin on 30 May 2021 due to a possible security threat on board.

The next morning, the spokesperson of the Russian Ministry of Foreign Affairs asked, on Facebook, why NATO did not make a statement and why nobody demanded an international investigation.

The answer is obvious for anyone outside of the pro-Kremlin disinformation circle: unlike a week earlier, the diversion of the flight was not forced, and when no actual danger on the plane was detected, all of the passengers continued their journey.

But the false equivalence was not going to stop the disinformers. The incident was broadly covered on Belarusian state-controlled TV, generously sharing the position of the spokesperson of the Russian MFA, and with Belarusian politicians alleging that this was the most obvious case of “double standards”.

Such a claim is a continuation of a disinformation mantra we observed last week: it not just that “everybody does it”, but, supposedly, it also happens “all the time”.

In a similar manner, the denigration of Raman Pratasevich continues. The pro-Kremlin media consistently portray him not just as a “bad guy”, but a “very bad guy” – an extremist and a mercenary, suspected of genocide and terror, having fought alongside “neo-Nazis” in Ukraine.

There is no evidence for any of these claims, as the investigation by independent outlet Meduza shows, nor are they in any way relevant to the case. But for pro-Kremlin outlets, such messages help to kill two birds with one stone: not only to discredit the jailed Belarusian dissident, but also to perpetuate the narrative of “Nazi Ukraine”.

The World of Hate

The pro-Kremlin disinformation about the forced diversion and landing of a civilian plane the and subsequent arrest of a Belarusian journalist aims not only to defend the illegitimate president of Belarus.

Notably, covering the meeting between the Russian and Belarusian presidents in Sochi, the pro-Kremlin media did not have to resort to disinformation, stating that:

“for Belarus, Russia is now the only neighbour where its planes can fly. This Sochi meeting is to be like no other as Belarus has found itself in the deepest crisis with the West ever”.

No need to lie, the job here is done.

Nonetheless, focusing on Belarus and international reactions to its actions allows pro-Kremlin spin-doctors to paint the world as full of “double standards” and hate directed at Russia and its friends. In the words of a Russian TV host Dmitry Kiselyov, currently under EU sanctions:

“The hatred towards Russia and Belarus, and we are in the same boat here, can be explained by the fact that we don’t give in to the Western madness – America and Europe – who have abandoned the way of their traditional culture, from gay parades and sex-change operations to destroying the monuments of founding fathers and admiring Nazism in Ukraine. We are different and in this sense, we are aliens to the West”.

The world of disinformation indeed is a dark and alienating one.