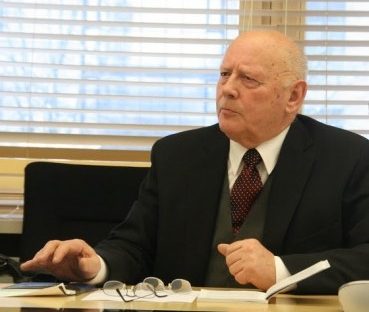 By Povilas Venciūnas, for Evolution

Although the Russian government’s propaganda and constructed narratives justifying its acts of war were previously known, they are now the subject of an international criminal law process that will be thoroughly investigated by prosecutors and defense lawyers.

An interview with Liudvikas Narcizas Rasimas, a signatory to Lithuania’s Act of Independence, a lawyer, a member of the working group for the writing of the Republic of Lithuania’s Constitution, and a member of the delegation to the Treaty of Russia.

An international inquiry into war crimes has been begun as a result of the ongoing Russia‘s agression in Ukraine. Do you see that both sides are preparing for it, despite the fact that it is too early to discuss it?

Neither side can usually objectively analyze the consequences of military action while it is taking place. War, no matter how it sounds, has its own set of rules. Each of the opposing sides is responsible for their own actions. This is one of international law’s earliest rules. Unfortunately, the reports we’re getting currently show that, in Russia’s opinion, international law does not apply to them. Nonetheless, I believe that Russia’s international defense will be built on “long-running” misinformation. As a lawyer, I think that the offenders will be brought to justice, and that efforts are already being made in that direction: evidence has been gathered, events have been documented, and international prosecutors have visited the war zone.

Materials are easy to come by in today’s world thanks to existing technology, which will make this procedure much easier. However, we are unable to speculate on the prospective outcomes of such a process at this time.

– In any case, for a long time, the Russian side has been disseminating its own version of events.

Yes, of course. In a decent world, Russia will be difficult to believe. It will now be critical for Russia to give a version of its defense that states that are still “in question” can trust. To be honest, Russia has been trying for a long time to come up with a narrative that would be acceptable to those who are hesitant to engage in this conflict for a variety of economic and internal political reasons.

As seen by the UN vote on Russia’s condemnation, the list of questioning (abstinent) states is not that short.

Russia is currently trying to convince that after the collapse of the Soviet Union, Boris Yeltsin and Eduard Shevardnadze as said „promised by foreign partners“, there will be no geopolitical coup and NATO will not expand towards the East. It is alleged that there are supporting documents (minutes of negotiations) and that these guarantees have not been complied with.

The truth is that once the Soviet Union fell apart, there were numerous meetings with international colleagues, including meetings with both Yeltsin and Shevardnadze. The situation in Russia at the time, however, compelled the country’s leaders to reconsider their preconceptions. For example, when Russia and Lithuania reached an agreement, Yeltsin, representing Russia, signed a document that said that both Lithuania and Russia were allowed to choose state unions, including defensive ones. The parties’ positions were established in the contract, thus any transcripts of the oral interviews were disregarded.

The West has made no commitments about the scope of NATO expansion. There was nothing like that. On the contrary, Russia tore Crimea, Ossetia, Abkhazia, and created the quasi-states of Donbass, Luhansk, and Transnistria, not the West. After then, surrounding states, observing Russia’s policies and objectively assessing their situation, sought and continue to seek various means to deter Russian aggression. The enlargement of NATO was clearly prompted by Russia’s aggressive activities.

And how is Russia’s power to decide on the statehood of other countries seen legally?

You mentioned that our knowledge has gotten entirely Westernized in the last 30 years. Another sovereign state’s fate cannot be decided by one sovereign state. Unfortunately, in the last decade of the previous century, things were very different. Due to the prevalent Soviet mentality at the time, many conversations were feasible in the negotiations – such a tone of discourse was given by the dissolving Soviet union and the political activists it had bred. Russian people at the period desired change and refused to accept vague requests, prompting a shift in Russian leaders’ attitudes. All of this was represented in the international treaties and bilateral agreements that had been inked.

– Russia accuses the West of continuing its provocations in Ukraine. Ukraine was encouraged to pick a side, whether it was with the West or with the East.

The problem is that Russia cannot attach itself to anyone, whether East or West, and occasionally refers to itself as part of Eurasia. The Russian government does not and cannot take part in other countries’ decisions. This is where the great chasm exists. Ukraine’s people have taken their own path, embracing Western principles, which Russia obviously cannot accept.

Russia also accuses that of Yanukovych’s refusal to sign an association agreement with the European Union (2013), Brussels has allegedly organized the Maidan in revenge.

The Ukrainian people have opted to grow in a Western direction. And then-President Viktor Yanukovych chose a different path: stealing his country (remember the “golden loaf” found in his extremely luxorious palace) and then violence. This sparked the Maidan and all subsequent events in Ukraine. Following the shooting of an unarmed mob, the Ukrainian president was terrified of the consequences and fled to Russia with the support of Russian special forces. Following that, democratic elections were held. As a result, the world community acknowledged Ukraine’s government as legitimate. Ukraine was administered by a democratically elected government following the elections. A change of administration was also secured, something that Russia, alas, cannot claim.

International law affirms the freedom of nations and individuals to revolt by overthrowing unpopular leaders. If, after such events and the leadership of those leaders, their convictions, escapes, democratic elections take place. If the state continues to function, all these governments are recognized in the international community.

There are many examples in the world about the overthrowing unwanted “nation rulers.” Spain, ruled by dictator Franco, existed until the dictator’s death in 1975, and the dictatorship of Nicolau Ceausescu ended tragically in 1989 by a decision of the military tribunal. Chile, despite having many problems, still got rid of dictator Augusto Rosé Ramon Pinochet Ugarte and became a democracy. Finally, peaceful transition of a dictator to a democratically elected leader in Belarus would have caused untold horror to the Kremlin leadership.

– There are often accusations about the status of the Russian language in Ukraine. Such resentment has long been escalated in the Baltic States. Ukraine is accused of discriminating against Russians, calling Russians not even humans.

The status of the Russian language, as in all states that were occupied or joined the USSR, was established and forcibly introduced by the Soviet Union itself. This emphasis on the Russian language dates back to Soviet times. Even now, we remember those situations from Soviet times: “speak the language of the people” (Russian: govorite po liudsky), and understand that other languages are not considered human languages other than Russian.

There is no such thing as the global status of the Russian language. The status of any language is decided by the states themselves. They decide on all the languages used and their status in the domestic life of the states. Unfortunately, the Russian-speaking population now fleeing the destruction of Kharkiv cannot believe that Russian army want to free them from the oppression of the “Russophobes”.

Regarding the names and nicknames On the contrary, the Russian authorities have launched a campaign calling the Ukrainians “breakaway Russians,” “chochols” and, finally, even drug addicts, Nazis and fascists. Finally, is this a reason to start aggression against another sovereign state?

-Accuses Ukraine that allegedly they did not want to see the Russians in Crimea.

First of all, we all forget that the Crimea is neither Russian nor Ukrainian. A completely different ethnic nation lives in the Crimea—the Crimean Tatars. According to the norms of international law, it is not the Russians but the Tatars who have the right to exercise the right of nations to self-determination. Therefore, even raising such an issue seems legally unjustified, but we all understand that it is a matter of politics here. Indeed, in tearing Crimea away from Ukraine, Russia has primarily broken its commitment to Ukraine to protect its territorial integrity and borders.

Following that, subsequent agreements in Minsk are drafted in such a way that almost no side can implement them without breaking them. Control of the disputed borders of the so-called LNR and DNA structures from Russia, for example, was agreed to be given over to the Ukrainians, and Ukrainian law (including Ukrainian electoral law) should have applied in those territories. And how will it be implemented if the so-called LNR and DNA forces are backed up by Russian army that is continuously attempting to expand the seized territory? In the last eight years, 14,000 Ukrainian soldiers have killed in the fight. Russia employs a similar technique in Sakartvele, where there are fewer deaths but the demarcation line is pushed deeper into the territory.

– Russia says that the West has always had a hostile attitude toward it. They never attempted to find common ground or involve Russia in the European security framework.

The West wanted and even included Russia in the common European security architecture, the Organization for Security and Cooperation in Europe (OSCE). Even NATO has tried to cooperate in various formats, causing even great surprise among the Russians themselves. However, Russia’s understanding has been and remains different: if the rules are not being developed by Russia itself, it will be difficult to follow them, especially if it has different plans for its neighbors. Now, in the heat of the war, as far as we can hear, Russia itself has been threatening NATO, and therefore the people of the Baltic States, as well as the world. Ignoring such threats would be unacceptable negligence.

As stipulated in the Budapest Memorandum, Ukraine abandoned its nuclear weapons (which remained in its authority after the breakup of the USSR) in 1994. By signing this memorandum, the US, the UK, and Russia have agreed to protect and defend Ukraine’s territorial integrity in exchange for the country’s nuclear weapons to be renounced – and what has transpired in reality?!

Ukraine has not issued a nuclear-weapons threat to anyone. Crimea was annexed by Russia in 2014. In March, Ukraine’s then-Defense Minister V. Heletej merely expressed concern that Russia would not have dared to annex Crimea if Ukraine had remained a nuclear state.

At this time, no intelligence reports indicate that Ukraine is moving in that direction. Unfortunately, Russia’s military is already attacking Ukraine’s nuclear power reactors, posing an obvious threat to the entire globe.

– What to expect now?

In any scenario, Ukraine is the victor. The world is finally waking up to the fact that fighting dictatorships, particularly dictatorial armed forces, is a pressing necessity. A Grand Tribunal will be convened. Unfortunately, the exact date has not yet been determined.

By Povilas Venciūnas, for Evolution