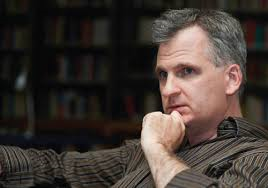 Why does Russian propaganda work?

The reason why the Russian propaganda works is that it speaks to a certain things in peoples’ psychological reality. Many people around the world think that the United States is responsible for all kind of problems, and so that a sensible thing to say: the United States is responsible for the problems in Ukraine. Many people around the world worried about violence, and so that is good thing to say that Maidan was all about violence. If Ukrainian counterpropaganda is going to be effective, you have to think not about your own point of view. You have to internalize the point of view of anyone else. If Americans like to hear about multicultural democracy – you have to tell them: “We are multicultural democracy”. If Europeans like to hear about great vacation spots – you have to tell them about great vacation spots. You have to think about what the other side is afraid, what is afraid of or ones. And start from here and think about how you can present yourself along those lines. That the basic principle.

What kind of narrative instead of Russian can Ukraine propose to the world?

For me, the right narrative is that “we are modern society”, not old-fashioned. We are European society. We represent good things about Europe: like tolerance, multiconfessionalism. I think another good narrative is “enthusiastic about Europe”, we took sufferers for Europe, we took risks for Europe. But another important narrative – you have to have your own history, you are getting clovered on history. Everyone has Russian historical narrative – it doesn’t make sense but everyone knows what it is – Kyivan Rus and so on. Something which makes all of Ukrainian history makes sense, which you don’t really have. But there has to be some vision of Ukraine history. Ukraine is a middle of Europe, Ukraine is a crossroad of civilizations, Ukraine is a place of invention, Ukraine is a place of wonderful cities. It has to be some positive story, cause Russian narrative is already present. You have to have your own story of the past. I don’t think you have that yet.

How to deal with propaganda?

Answering fire to fire – we get to Hell in the end. So there should be not only contradiction, but also creating your own viewpoint. Start from the simpliest – Ukraine doesn’t yet have any popular books on Ukrainian history. It will help to increase people’s awareness of your historical controversial episodes and, of course, make them more resistant to propaganda and fakes. And keep doing your revealing fact-checking job!

What more can our project Stopfake do?

You can only do what you do. Your name is what you do. Not creating propaganda for your country, cause no one will believe you, but stop fakes spreading, look after Ukrainian media also. Sharing truth and make people aware of danger of fakes. Cause you influence people and they influence future.

Timothy Snyder is Housum professor of History at Yale University and the author of  Bloodlands: Europe Between Hitler and Stalin.