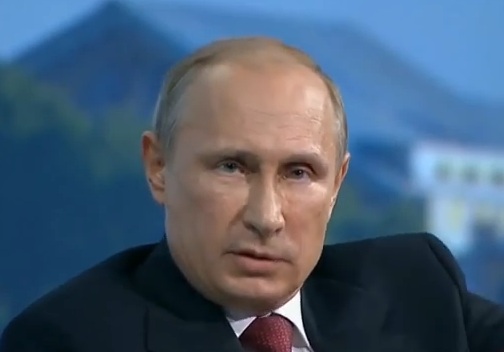 How the Russian leader is driving U.S. officials crazy with his “I know you are but what am I?” technique

By now Vladimir Putin’s flair for propaganda is well known. But as the Ukraine crisis continues to unfold, the former KGB agent’s particular brand of disinformation is coming into clear focus. The method is simple. Whenever he’s accused of something, Putin retorts: That’s whatyou’re doing, not me, writes Michael Crowley in his article for Time Magazine.

Start with the original protests in Kiev, against the government of then-President Viktor Yanukovych. While the protesters were a largely middle-class, educated group resisting authoritarian rule, the Kremlin cast them as the real tyrants—”fascists” staging an illegal coup. Even after Yanukovych’s goons and snipers murdered dozens of protesters, pro-Kremlin news outlets like RT depicted the Maidan activists as a group of brutal thugs.

After Putin annexed Crimea from Ukraine in March, Washington said he was violating international law. The Russian leader quickly flipped the accusation, accusing America of breaking international law during military actions in the Balkans, Libya, Iraq and elsewhere. “Our Western partners led by the United States prefer to proceed not from international law, but the law of might in their practical policies,” he snickered.

When pro-Russian militants seized government buildings in eastern Ukraine last month, Washington accused Putin using covert agents to foment the rebellion. Putin not only denies the charge, he says that’s what Washington did by allegedly engineering the original protests in Kiev. Taking the charge a step further, Yanukovych, now living across the border in Russia, charges that when CIA director John Brennan visited Kiev in April, he conveyed orders for Ukraine’s military to attack Russians in the east.

Think you have a deal with Putin? Think again. Two weeks ago, Secretary of State John Kerry brokered an agreement with Moscow, Kiev and the European Union to make pro-Russian militants leave occupied buildings in eastern Ukraine in exchange for amnesty, among other provisions. Or so he thought. Within hours, Russian Foreign Minister Sergei Lavrov added a surprise twist, insisting that the deal also required the protesters still camped out in Kiev’s central square to decamp. But that was never part of the agreement, according to the State Department. The deal quickly fell apart.

That leads us to the present moment. The U.S. has called for Putin to withdraw the 40,000 Russian troops now threatening Ukraine along its eastern border. Naturally, Putin is calling the Ukrainians as the warmongers. “They have gone completely mad: bringing in tanks, armoured vehicles… and cannons,” he said in a public appearance last month. “What do they intend to do with cannons? Have they completely gone mad?”

On Thursday, Putin achieved perfect info-warfare symmetry on this point. Amid continued calls for Russia’s army to stand down, the Kremlin released a statement saying that Ukraine is the side that should demobilize forces—from its own territory. Putin “emphasized that it was imperative today to withdraw all military units from the southeastern regions [of Ukraine],” the Kremlin said in a statement.

Putin’s Orwellian style seems to be driving U.S. officials to frustration. Last week, Secretary of State John Kerry fumed over the Russian president’s “fantasy” version of reality, complaining that outlets like RT are “devoted to this effort to propagandize and to distort” the truth. “No amount of propaganda will hide the truth,” Kerry declared.

Putin was no doubt unimpressed. Speaking a couple of weeks earlier, he had dismissed complaints among dissidents at home about his control of information.

“Some people believe that whatever they say is the ultimate truth, and there’s no way that things can be any different,” Putin said. “So when they get something in response, it causes a strong emotional reaction.”