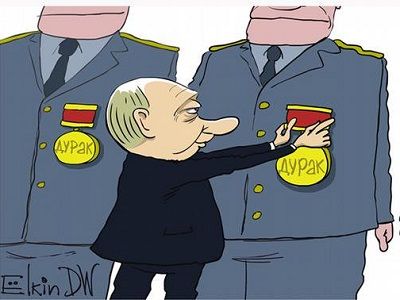 “By his planned cleansing of the political field of Russia” of anyone who might challenge him, Vladimir Putin has “liquidated any direct threat to the preservation of his power,” Igor Yakovenko says. But at the same time, he “has created a new albeit long-term threat” to him and Russia.

The essence of this threat, the Moscow commentator says, is that “in Russia today, there exists a critical mass of fools in power and fools with initiative,” a reality that Putin himself occasionally acknowledges as he did with regard to official attacks on artists and directors (kasparov.ru/material.php?id=59719A83C5005).

“But the winner of the competition for the title ‘chief fool of the month’ undoubtedly is DNR head Aleksandr Zakharchenko who declared that he is replacing Ukraine and putting in its place Malorossiya with a capital in Donetsk.” Unlike most fools in Putin’s entourage, this wasn’t a personal evaluation or a prediction: this was a declaration.

Holding what he said was “’a constitutional act,’” Zakharchenko listed the 19 Ukrainian oblasts he said would be part of his new state. (Why he didn’t list the other four is uncertain. Perhaps he doesn’t know, Yakovenko says.) Worse yet, “it is obvious that the Kremlin wasn’t prepared to go so far in its own alternative reality.”

Putin’s press secretary Dmitry Peskov didn’t quite know how to react at all, while Vladislav Surkov suggested that all the “hype” about Malorosia about “the imaginary state of Malorossiya on the whole is useful.” At least, it will have an impact on Ukraine’s efforts to integrate with Europe.

To the honor of Ukrainians, Yakovenko continues, “many of them still have” a positive attitude toward Russia and its leadership.” But “it is difficult to say how the further rapid growth in the number of fools in the Russian leadership and the appearance of ever new foolish initiatives on the relationship of citizens of Ukraine and Russia.”

“Especially,” he concludes, “if one considers that the author of this main and most foolish initiative on the occupation of Crimea intends to continue to rule Russia until the end of his life and Russians in the same way are prepared to put up with this.”