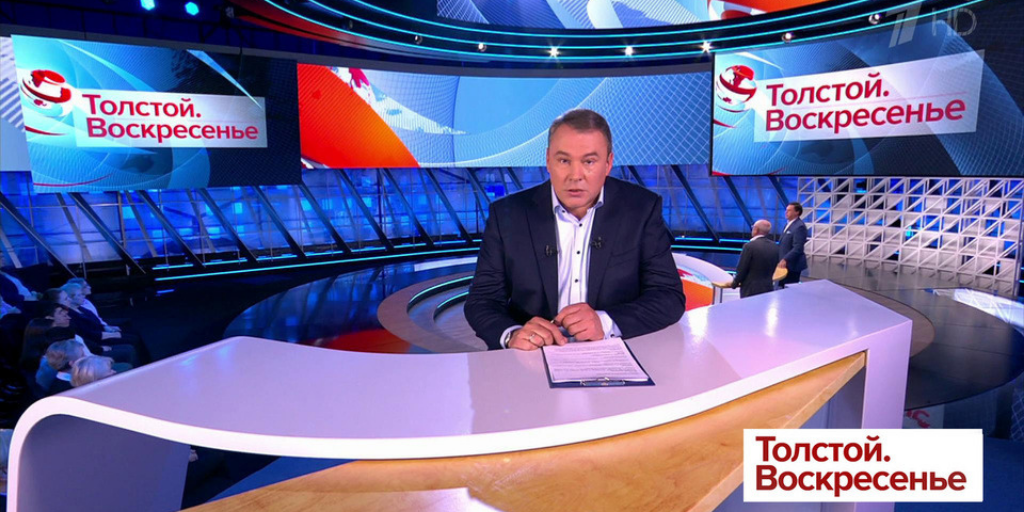 Ukrainian language is artificial, as are Ukraine’s borders. In fact, Ukrainians are just Russians.

These statements do not come from a “troll” or the hate speech of an online provocateur. The person behind them is the Deputy Speaker of the State Duma, Russia’s Parliament, who also has the privilege of hosting his own current affairs talk show on Russian state TV.

The new programme is called “Tolstoy. Sunday“. It premiered on 14 October and will from now be aired every Sunday to millions of Russians by state TV Pervy Kanal.

Descendent of the novelist

The programme’s title plays with the title of a novel from 1899 written by the Russian novelist Leo Tolstoy, Resurrection, (the words for “Sunday” and “resurrection” are pronounced similarly Russian, but have slightly different spelling), reminding viewers also that the host, Pyotr Tolstoy, is a direct descendent of the famous author.

But the title thereby also carries the message that the Deputy Speaker has now returned to television after a break that started in the autumn of 2016 when he became an MP.

The concentration of significant political and media power in this way – and especially when this position is used to articulate statements such as those referenced above – serves as an illustration of the fundamental problems in Russia’s current media environment and why e.g. France’s President Macron has questioned if Russian state media can be called media and if the output they present as journalism has anything to do with journalism.

Russian state TV Pervy Kanal has a track record of spreading disinformation. It has, for example, used images from a computer game as an illustration of Russian military action in Syria. Image: Screendump from Pervy Kanal.

Among those who have expressed concerns with this latest example of the cross-fertilisation of Russian politics and media is veteran journalist Igor Yakovenko, a former Secretary General of the Russian Union of Journalists and himself a former MP.

In a recent analysis published on his blog, Mr Yakovenko sees “Tolstoy. Resurrection” as a sign of competition between Pervy Kanal and the other large state-owned national TV channel, Rossiya 1, which is where iconic disinformation-oriented TV hosts, such as Dmitry Kiselev and Vladimir Solovyov, broadcast their programmes.

According to Mr Yakovenko the environment of what he characterises as “the hate channels” is in a state of crisis. In his analysis, these TV channels “constantly have to increase the temperature, inventing new provocations to incite [hatred]. At the same time, the gap between what is happening on TV and what interests the majority of the Russian population is becoming increasingly tangible. It seems that the time when the country could be controlled using television is running out. But the Kremlin has no other tools…” 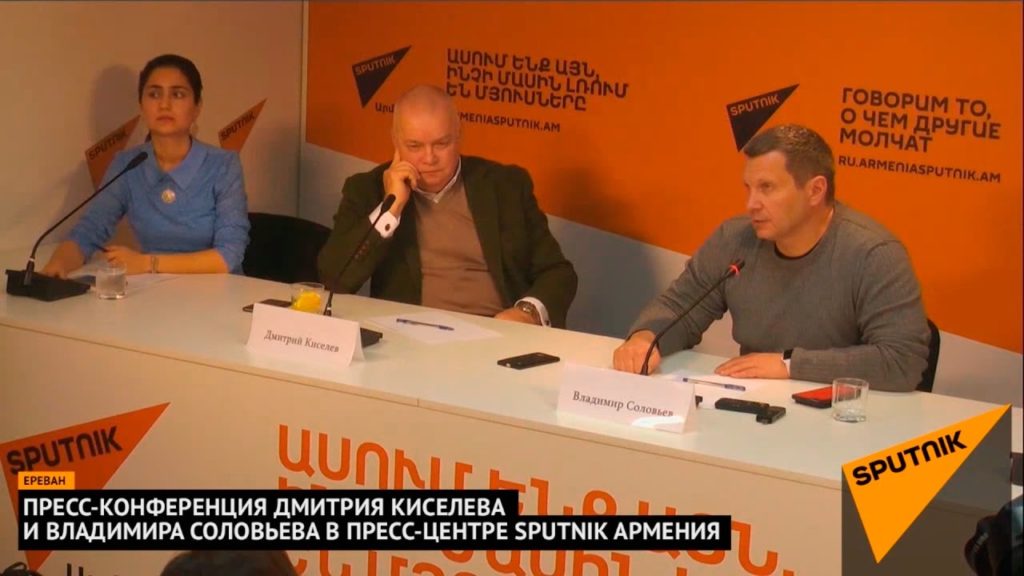 Dmitry Kiselev (in the middle) has his own program on state TV Rossiya 1 and is chief editor of RIA Novosti and Sputnik. He is under a personal EU sanction. Vladimir Solovyov (right) also hosts a talk shows on Rossiya 1. Image: Youtube

Propaganda paved the way to parliament

Pyotr Tolstoy’s original claim to fame before his tenure in the State Duma was his success as host of the talk show “Vremya Pokazhet” (“Time Will Tell”).

The show has remained one of the central channels for communicating the Kremlin’s disinformation narratives; see the more than 500 examples of disinformation from this particular programme collected in our data base.

The Ukrainian nation is not alone in the role of target for Mr Tolstoy: other statements he has made have been characterised by Jewish leaders in Russia as “openly anti-Semitic”.

Mr Tolstoy also represents his country internationally as the Head of Russia’s Delegation to the Parliamentary Assembly of the Council of Europe (PACE).