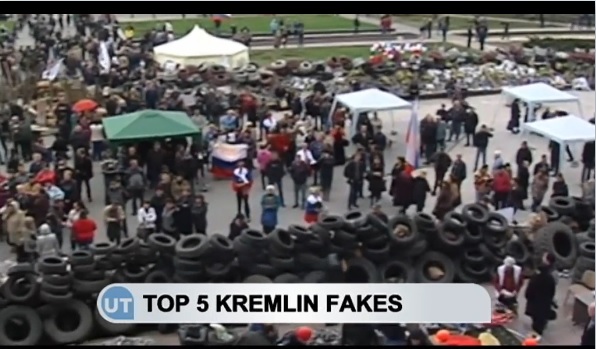 This year has seen a flurry of false reports and outright lies about the crisis in Ukraine. Most of the stories have originated from Russian state television. At number five in our 2014 review oftop Kremlin fakes is the most versatile lady on Russian TV.

5) The spring and summer saw Russian-backed insurgents sow unrest in the east and south of Ukraine. Russian television gleefully reported that residents were suffering under the Ukrainian government. This woman was among the emotional residents of Odesa advocating separatism. And here she is again in Donetsk working as a lawyer. And again heading a Christian nonprofit. And here she is again in Moscow, giving out her Russian phone number. In fact, she appears in videos throughout the conflict playing a wide variety different roles – so many, in fact, that Ukrainians decided she deserves an Oscar for her outsanding performances. The woman has been identified as Maria Tsypko, who is apparently originally from Ukraine’s southern city of Kryviy Rih.

4) At four is the tale of the slave incentive scheme used by the Ukrainian military. In early November, Russian state television quoted a man in eastern Ukraine who claimed that fighters in Ukraine’s National Guard would receive a parcel of land and two slaves for their service. The man was identified by the channel as the head of the village of Stepanivka. But it turns out that the head of the village was actually someone else, and all the residents had fled the village after it was destoyed by Russian-backed insurgents on September 11.

3) In third place is the Kremlin TV footage of one young Western boy’s gay porn delight. Near the end of November, Russian state television broadcast a story showing an American boy elated after discovering that his parents had decorated his bedroom with gay pornography. The report was meant to discredit Europe and the US as lands of moral decadance. But the video was not what it seemed. The real video shows the boy discovering a poster of a monster truck on his wall as part of a birthday surprise. The company which made the original video called the Russian report hateful and bigoted and threatened to open a lawsuit.

2) The MH17 tragedy has been a magnet for Kremlin fakery as Russian media has scrambled to deflect blame for the disaster. In second place in our 2014 ranking is the Russian First Channel story featuring an alleged satellite image whih they claimed proved that a Ukrainian fighter jet had shot down Malaysia Airlines Flight 17 over the Donetsk region on July 17. The image was quickly and definitively debunked, with astute eyes noting that the Malaysia Airlines plane was curiously similar to the first result for a Boeing airplane on Google’s image search, and that the Malaysia Airlines logo was in the wrong place. The fighter jet was also shown to be of a different kind than what was claimed.

1) And at number one is the tale of the crucified boy who never was. In July, Russia’s First Channel broadcast an interview with a woman who alleged that Ukrainian soldiers had crucified a three-year-old boy in front of his own mother following the liberation of Slovyansk. She claimed Ukrainian soldiers took the boy and crucified him ‘like Jesus’ onto a noticeboard. The woman then alledged troops forced the boy’s mother to watch as her son bled and cried, before they tied her to a tank and dragged her around the central square. Months later, the channel admitted that its jounralists did not have proof to back up the woman’s claims, but claimed that the woman featured was not an actress.