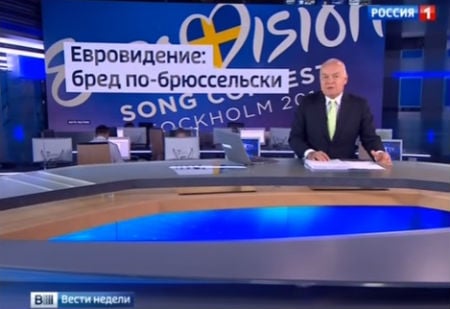 Dmitry Kiselyov, one of Russia’s most prominent television pundits and the head of the news agency Rossiya Segodnya, acknowledged that his TV program used a fake Nazi ID card as the basis for a 7-minute investigative report that compared Ukrainian pro-European activists to a Nazi SS division made up of Ukrainians during WWII, Nikita Lichachov wtote for TJournal.

All the same, Europe and Ukraine are still to blame for the slip up, Kiselyov insists. The television network’s researchers acquired the fake document from “European flea markets,” he says. The document was so convincingly real, because “local masters of the genre” on “Little Arnautsky Street”—a road in Odessa, Ukraine, infamous as trading spot for contraband and illegal goods—had made the forgery.

Kiselyov thanked viewers for alerting his show to the inaccuracies it presented as facts. He shied from apologizing for the bogus report, however, preferring to applaud his show and its viewers for sparking a wider discussion about the crimes of the Waffen SS.

Kiselyov had used the fake ID card as a pretext to discuss neo-Nazis in Lviv, Ukraine. The ID card was shown in a “Vesti Nedeli” special feature about the legacy Adolf Hitler on April 24, four days after the fascist dictator’s birthday. On the most recent airing of “Vesti Nedeli,” Kiselyov expressed regret over his use of the fake document saying, “This is an inexcusable fake.”

Dmitry Kiselyov is a staunchly pro-Kremlin TV pundit working in Russia. His investigative TV program “Vesti Nedeli” (News of the Week) is known for presenting highly speculative reports. In a report that aired November 8, 2015, for example, Kiselyov suggested that the United States may have turned a blind eye to the terrorists who may have been responsible for the crash of a Russian passenger flight in Egypt on October 31.

Anti-corruption crusader and politician Alexey Navalny is suing the TV network that hosts “Vesti Nedeli” for advertising “The Browder Effect,” a documentary that purports to expose Navalny’s ties to Western security services.