The war in eastern Ukraine was the first European war to take place in the ubiquitous presence of the Internet, documenting nearly every aspect of the war as it played out. The conflict’s ideological battleground unfolded online, making tragic events into fodder for propaganda (for Internet users in both camps of the war).

As historians and investigators look back at the fighting, it will be vital to collect as many views as possible on individual events, in order to discern fact from fiction. This guide will show you how to find pro-separatist, pro-Ukrainian, and independent-observer (OSCE) reports for specific days, using as a case study the January 13, 2015, shelling attack on a civilian bus near the town of Volnovakha, which resulted in the deaths of 12 passengers.

Much like the Ukrainian government, various separatist groups issue dispatches that summarize recent battles and military activity. Also like dispatches from Kyiv, these should not be trusted without extensive verification through outside sources. Below is a list of some of the most popular separatist dispatches, most of which have information going back to the first half of 2014. Many of these dispatches duplicate the same information, but they may also contain additional photos, videos, and context:

Searching for one of these outlets (Новости Новороссии) with the date parameters of the day of and after the attack, we find dispatches on pro-separatist RusVesna.su for the two days:

For the January 13 report, the separatist dispatch says, “The armed forces of Ukraine shot up a passenger bus with peaceful citizens at a checkpoint near Volnovakha. 10 people are dead, 13 are wounded.” More information can be found searching for another of these dispatches—the News of the Donetsk Republic—with the data parameters and the keyword “Volnovakha” in Russian:

In the first result, the news site provides quotations from separatist commander Igor Girkin (Strelkov) and pro-Russian/pro-separatist blogger Boris Rozhin (“colonelcassad”). Girkin accused Ukraine of “attempting to hide the truth” and said that there were “clear signs of bullet wounds from small caliber weapons,” contradicting Ukrainian claims that separatists shelled the checkpoint with artillery. Rozhin sees a more complicated plot, saying that there should be “several craters” at the site and not just one near the bus, and that Ukraine fired a single shell at the passenger bus to blame separatists for the attack. In a real separatist attack with a Grad artillery system, as Rozhin’s argument goes, there would be dozens of shells fired at the location.

The Ukrainian National Security and Defense Council (СНБО, or NSDC) releases regular dispatches regarding casualty figures, the locations of battles, and sightings of Russian and separatist military equipment in eastern Ukraine. You can access these from various Ukrainian news sites, including the video dispatches that usually include Anti-Terrorist Operation (ATO) spokesperson Andrey Lysenko. Like the separatist dispatches, the information contained in these NSDC and ATO dispatches should not be taken at face value and should always be verified with additional sources.

To find a situation map or dispatch for a particular day, Google the phrase “АТО СНБО,” plus the date, or change the Google search parameters to include only a certain day. The Ukrainian news site 112.ua hosts videos and reports on nearly all of these dispatches. You can also find information from ATO dispatches and National Security and Defense Council reports on social media, such as NSDC’s English-language Twitter account. 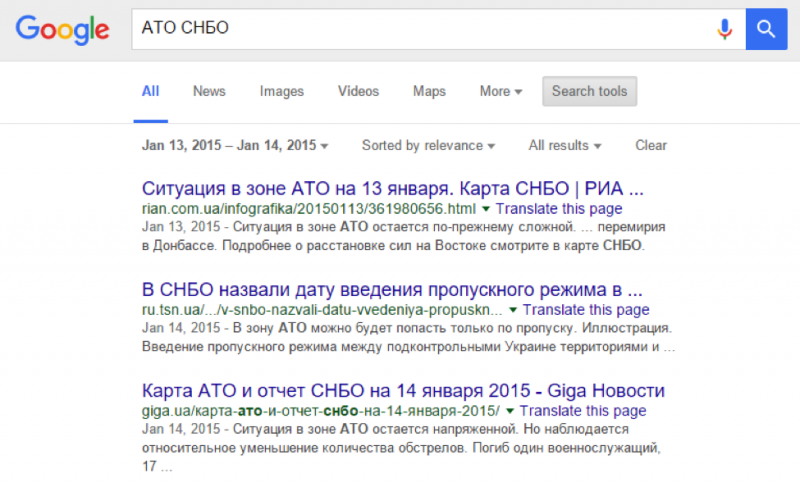 The first three results are Ukrainian news reports on the updated maps and situation reports from the Ukrainian NSDC for January 13 and 14, 2015—the day of and after the Volnovakha bus attack. 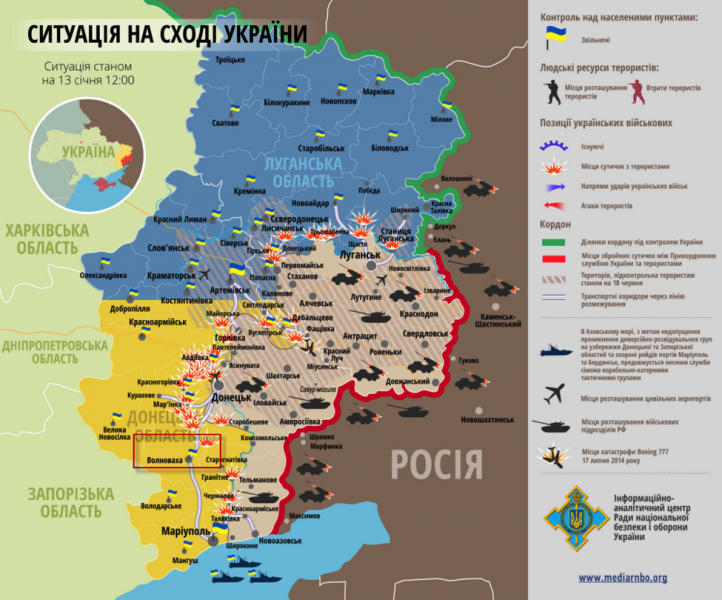 On the map, the red square denotes Volnovakha, where the bus attack occurred. As we can see, the area is well under Ukrainian control.

Further investigation with searches of Волноваха автобус (Volnovakha bus), using the date parameters of January 13-14, 2015, gives us a tremendous amount of information, as this incident made news headlines for several days in Ukraine and Russia. Shortly after the attack, various Ukrainian news outlets published a video of the attack from security footage, showing approximately 88 shells fall around the checkpoint, with fire seemingly coming from the northeast in the direction of separatist-held Dokuchaievsk.

The Organization for Security and Co-operation in Europe (OSCE)

The OSCE is the only international organization allowed to conduct monitoring in eastern Ukraine, thus making it a valuable resource for independent information about the conflict. The OSCE produces daily updates, along with spot reports on special events, regarding any fighting observed, groups of vehicles spotted, investigations into particular attacks, and other events. The daily OSCE updates can be accessed here, along with the spot reports.

One of the most widely discussed OSCE updates was its spot report on the Volnovakha bus attack, following a separatist artillery attack near a checkpoint. With allegations flying from both Ukraine and separatist forces, the OSCE report was a stabilizing force in the controversy, dismissing separatist allegations of a landmine triggering the attack or a Ukrainian “false flag” attack against its own checkpoint.

The OSCE’s Special Monitoring Mission (SMM) arrived at the location of the incident at 5:45 p.m. and witnessed the removal of two dead passengers from the bus. The bus had shrapnel damage consistent with a nearby rocket impact, estimated by the SMM to be 12-15 meters from the side of the bus. The SMM visited the Volnovakha hospital where the staff confirmed that 10 persons on the bus were killed instantly, while two died later in the hospital. Another 17 passengers were injured.

Thinning the ‘fog of war’

There is more information about the Volnovakha bus attack than most incidents in the Ukrainian war, as this particular attack drew international outrage and commentary from world leaders. Nevertheless, the same research principles can be applied to study events as minor as an empty town being hit by mortar fire, or as major as the MH17 tragedy. Though the Volnovakha attack was fairly unambiguous in culpability, not all incidents are so clear, as Ukrainian sources often compete with separatist spokespersons to produce unreliable reports. Even with the flood of wartime information created and made accessible by the Internet (dispatches, videos, photographs, and eyewitness accounts), the fog of war is still thick. But it’s not impenetrable.