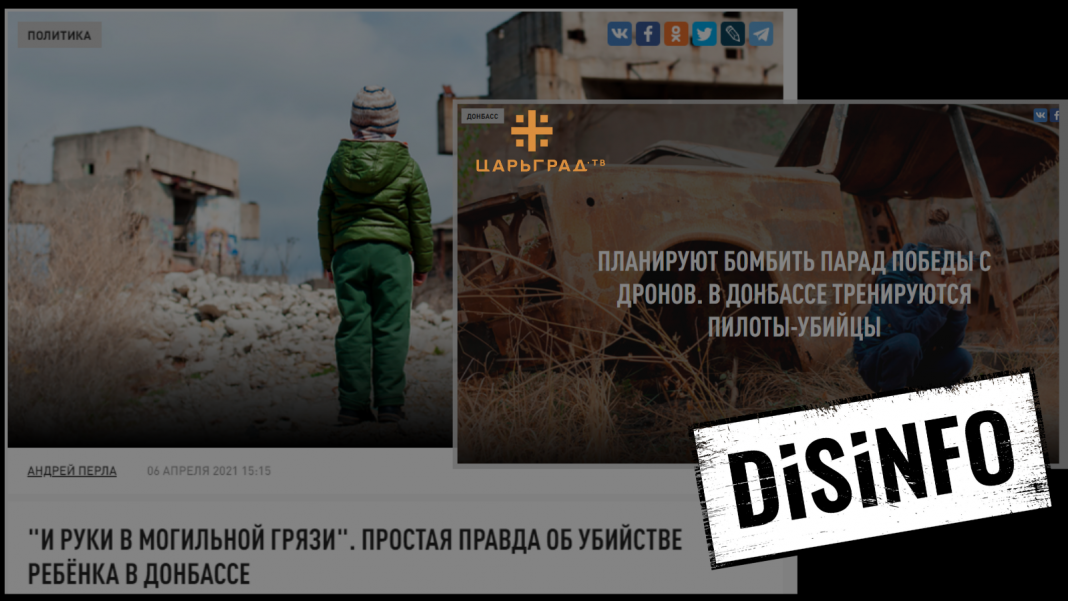 Exploiting the Death of a Child to Justify Violence

On 2 April, a four-year-old boy was killed outside the village of Oleksandrivske, some 40 km outside Donetsk in the non-government-controlled area. On 7 April, a team from the OSCE Special Monitoring Mission, SMM, examined a fresh impact crater. The team reported its findings 8 April:

The SMM could not assess the type of ordnance that caused the crater. It assessed all the above-mentioned damage as recent and probably caused by shrapnel.

The team was presented with a death certificate, establishing the cause of death as “due to blast trauma and multiple shrapnel wounds”. The boy and his family are victims of a war; now the Kremlin media has decided to exploit the tragedy to justify aggression against Ukraine.

The pro-Kremlin media do not hesitate: the tragedy is described as a premeditated attack on the children of Donbas: an improvised explosive device was dropped from a Ukrainian UAV (unmanned aerial vehicle), intentionally, on the family’s home. On 4 April, the head of the Russian Parliament’s Committee on Foreign Affairs, Leonid Slutsky, added unique details(opens in a new tab) to the case:

Kyiv is waging a fratricidal war, sending missiles with the text “To the Children of Donbas” to southeast Ukraine.

One might expect that the Russian authorities would provide that kind of evidence, but no parts of any shrapnel or ordnance, no documentation of the place of impact support the claims. The OSCE team could only visit the site 5 days after the incident. There were no signs of any kind of police investigation on the site. The only existing documentation is the medical certificate and the OSCE report from the impact site.

Despite the dearth of substantive facts on the incident, pro-Kremlin and nationalist media built a dramatic case of aggression by Ukraine. The children of Donbas are not the only target of the Ukrainian aggressors:

It is possible that the attack, leading to the death of the boy, was a “trial balloon” for similar actions planned for [the Victory Day] 9 May. Ukraine is in urgent need of a war before the completion of the second part of the Nord Stream gas pipeline, and such an action fits very well into a provocation to ignite the situation.

Nationalist Tsargrad hints that the device might not have been an improvised explosive device, but a factory-made, western contraption.

It might not actually have been a home-made bomb, but ordnance of Western production.

Several Russian journalists and outlets have expressed doubts about the claims of the tragedy as the result of a premeditated Ukrainian attack against civilians. Aleksey Venediktov, editor-in-chief of the independent radio station Ekho Moskvy, notes the lack of hard evidence:

This story is stuck on the situation that we know that the boy was killed, but we do not know what caused the death. There is information from the DNR and LNR that it was a missile attack, but also information that ordnance was stored at the site and the incident was a tragic accident. It is impossible to establish either.

Venediktov is, as any professional editor, suggesting a certain caution on reporting on a sensitive issue with a weak factual basis. The reaction from the pro-Kremlin media is aggressive. Facts or no facts, the important thing is to whip up strong, hostile emotions:

A cold, civil war is going on in Russia. This is not news. This war is a part of a global hybrid war, a new cold war. This is also not news. The Liberals are our mortal enemies, both in the information war and, as they say nowadays, the war of mentality. In this war, they are traitors, fighting on the side of the enemy.

The European Commission’s Action Plan against Disinformation establishes a definition of disinformation as “verifiably false or misleading information that is created, presented and disseminated for economic gain or to intentionally deceive the public, and may cause public harm”. The tragic incident in the Ukrainian village of Oleksandrivske contains verifiable facts: A boy, born in October 2016, was killed. The death certificate confirms death from shrapnel wounds. Independent observers from the OSCE can document impacts on the site from a recent explosion.

Around the tragedy, a set of unfounded claims are circulated:

The claim is not supported by forensic evidence, or witness accounts. The Ukrainian armed forces use UAV whose range is insufficient to reach the Aleksandrivske village.

This claim is not supported by forensic evidence.

The claim is not supported by any evidence.

Russian journalists work within the framework of Russian constitutional law. A critical approach to unfounded claims is not treason.

More than two months has passed since the tragedy and pro-Kremlin media have since dropped the story entirely. It did not hold up to scrutiny; just like the story about the crucified boy in Slov’yansk in 2014, and the liars hope the lies will be forgotten.

There is another fact in this sad story: A family lost a child, and the pro-Kremlin media and politicians seek profit from the tragedy to justify violence. The pro-Kremlin media marches on, reuse the jaded lies, sniffing around for new tragedies to exploit.