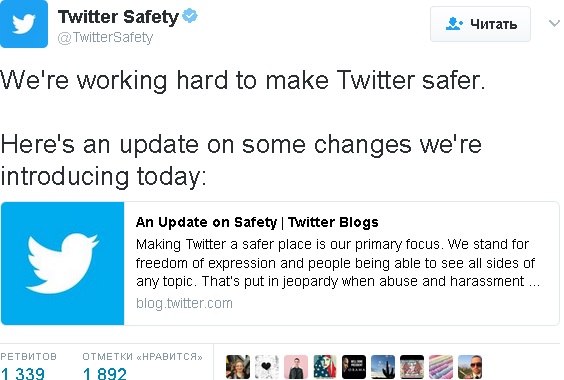 Twitter has long been criticized for how it handles abuse and trolls on its platform, and on Tuesday the company unveiled its latest attempt to deal with the problem with three new features.

Twitter said it will prevent previously suspended users from creating new abusive accounts; it’s developing a “safe search” that lets users avoid searching for hateful or abusive tweets, and it’s tweaking the timeline with a new feature that will collapse “potentially abusive or low-quality tweet

In a post announcing the moves, Twitter said the collapsable tweets will ensure the “most relevant conversations are brought forward.”

The “safe search,” meanwhile, will remove tweets “that contain potentially sensitive content and Tweets from blocked and muted accounts from search results.”

And here’s how Twitter explained how it would stop the creation of new accounts that are hateful and target users:

We’re taking steps to identify people who have been permanently suspended and stop them from creating new accounts. This focuses more effectively on some of the most prevalent and damaging forms of behavior, particularly accounts that are created only to abuse and harass others.

The company said these changes — along with others — will be implemented in the coming weeks. Last fall, Twitter introduced new mechanisms for muting and reporting tweets.

While abusive behavior has flourished on Twitter, the platform has become central to the political narrative — and a necessity for many journalists — due to President Donald Trump’s affinity for the service.

“I wish I could turn back the clock and go back to 2010 and say, ‘Look, we’re going to stop abuse on the platform by creating a very specific bar for how you need to engage in conversation,” he said. “I really feel like a lot of that is on me, from six to seven years ago.”

Last night I reported an account with “Hitler” in the handle; today he’s back, new name, same tweets. Twitter is crushing this abuse thing.